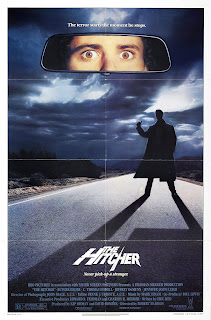 
The Hitcher is a film I find incredibly difficult to be objective about. Notwithstanding the dismal and desultory remake that appeared in 2007, the original 1986 production has for some years been challenging as my favourite film of all time. In the dark days of university when I had to endure endless drinking sessions in which Eisenstein or Jean-Luc Godard were toasted, I did my best to trumpet the brilliance of Night of the Living Dead (1968), The Wicker Man (1973) or The Hitcher. One such evening saw a painfully serious young chap wax lyrical on the montage editing favoured during the 1920’s by a number of Soviet filmmakers. It was summer, it was hot and stuffy in the bar, but this didn’t stop the guy from wearing a scarf indoors. Anyway I digress (but what is a blog for, if not for digression?). I was left cold and unimpressed by The Man with a Movie Camera (1929), and instead I pointed out a scene in The Hitcher in which C. Thomas Howell is being chased down the desolate highway by a couple of cop cars. This scene is a marvel of editing, it includes a moment in which a helicopter is shot out of the sky, and ends with the cops managing to blow the tyres out of both cars. I also mentioned a sublime low angle tracking shot which glides towards Rutger Hauer after he has been thrown out of Howell's car. The low angle giving Hauer a malignant menace that haunts the film. Academic theories are merely models to aid a certain interpretation. They cannot answer the question of what makes a film good, or why we like a film. These questions are shrouded in a veil of subjective mystery. I cannot say whether The Hitcher is a good film or not, and I’ve seen it twenty times. Yet my colleagues that evening convinced themselves it was rubbish without ever having seen it. I prefer to embrace the mystery, to accept the unknowable…I should have known then that a career in academia was probably not for me.

The Hitcher provides a number of challenges for audiences, which is a mark of its arrant non-conformity in mid 1980’s American cinema. The first dialectic of note is with genre. The film is on one level a straight forward action thriller the likes of which were commonplace in the 1980’s. It’s major distinction however is an unusual glorification and exploration of sadism and implied masochism. The Hitcher also works tremendously well as a road movie, a psychological and possibly psychosexual drama, and modern horror movie. This generic hybridity is no doubt part of the appeal too aficionado’s of cult cinema, and this is further confirmed by the iconic presence of Dutch national hero Rutger Hauer. In the more than capable hands of Hauer, psycophath John Ryder becomes one of modern cinema’s true enigmas. There is a mystery within the character that remains hidden and perplexing - this is a brave narrative strategy which has been paid off a thousand times over in the intervening years. Ryder is a sadistic mass murderer who seems to kill without motivation and totally at random. He is devoid of history and backstory, and as we discover he even lacks an identity. Does this represent lazy writing on the part of Eric Red?, not at all, this is the fundamental aspect of The Hitcher that has led to its enduring appeal. 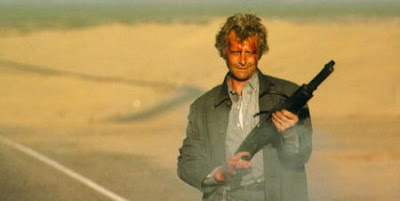 To add a further layer of tension Ryder appears to have an almost supernatural ability to manipulate events and appear at precisely the right time for maximum effect. Ryder has a dark and terrifying omnipotence, appearing out of the haze of the afternoon sun to wreak havoc on unsuspecting individuals. Hauer is particularly magnetic, carefully creating such a dominating aura that he would forever be associated with the role. To marry such a destructive force to the beauty and openness of the American landscape is another major success of the film. The director Robert Harmon is able to manipulate the spatial possibilities of the landscape, creating a sense that at one and the same time these spaces represent freedom and imprisonment. The character of Jim Halsey played with wide eyed innocence by C. Thomas Howell is unwittingly dragged into a violent and nightmarish rites of passage - a journey that begins with smiles and excitement and ends embittered, cynical and broken. The bond that Ryder forces into existence between himself and Halsey goes far beyond conceptions of good and bad. There is an obvious homo-erotic undertone to their relationship, but more specifically it is a sense of fate and destiny. Ryder is desperate for an end to his existence, and Halsey has to perform this deed, in order to become an adult.

There are other ways in which The Hitcher is untypical. The film totally rejects a romantic subplot. The fate of Nash (Jennifer Jason Leigh) is unusually cruel, and is a very unexpected plot twist. Halsey is only allowed one relationship in the film, and its with John Ryder. Its hard to say which talent behind the film should get the lions share of the credit. Eric Red would go on to pen Near Dark (1988) and Bad Moon (1996), which were both in their own way as ingenious as The Hitcher. The subversive attitude to traditional notions of genre would appear to come from Red. But the role of landscape and the structure of the film owes a great deal to Harmon’s earlier short China Lake (1983). The film certainly has a number of plot absurdities, and sometimes the behaviour of Ryder’s character is too convenient , C Thomas Howell’s performance may divide audiences, and Jennifer Jason Leigh is barely awake. The soundtrack by Mark Isham is noticeably dated and at times inappropriate. Yet there is something in The Hitcher that defies its numerous shortcomings.