A Ghost Story for Christmas - The Stalls of Barchester (1971) 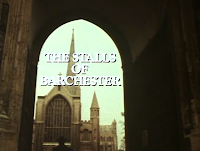 The chilling short story The Stalls of Barchester Cathedral first appeared in M. R. James’ 1911 collection More Ghost Stories, and was chosen by writer/producer/director Lawrence Gordon Clark as the curtain raiser to what would become eight consecutive ghost stories broadcast by the BBC at Christmas between 1971 and 1978. The path had already been trod to some degree by Jonathan Miller, who had written and directed an adaptation of James’ Whistle and I’ll Come to You, in 1968, for the BBC’s Omnibus. Such is the success of Miller’s effort that it is often erroneously considered a part of the A Ghost Story for Christmas series. Although The Stalls of Barchester does not quite reach the heights of its predecessor (which benefits tremendously from its monochrome palette and the beautifully observed performance of Michael Horden) it does have numerous merits of its own. The muted and purposefully under lit cinematography of John McGlashan for example offers an indication that the filmmakers were thinking with black and white in mind, though the delicate candle lit study of Archdeacon Haynes (Robert Hardy), his bedroom, and the eerie cloisters of Barchester Cathedral generates its own peculiar atmosphere of unease. Clark utilises off screen space particularly well, with the menacing visitations of something supernatural existing at the extreme periphery of the frame, and only emerging in the briefest glimpses of a black cat, and most disturbingly of all, a grey lifeless hand with frighteningly sharp talons. 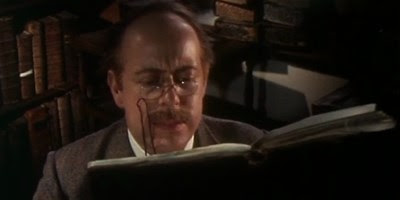 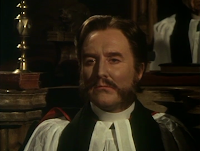 The Stalls of Barchester also benefits from a strong central performance from Robert Hardy, and able support from Clive Swift as Dr. Black, the man employed to index the hundreds of dusty volumes of the Cathedral’s library. It is whilst doing this that Dr. Black happens upon a locked chest containing the memoirs of Archdeacon Haynes, who mysteriously perished some decades before. It is here that Clark commits an unfortunate narrative error. While the library setting adds a certain antiquarian charm, and impresses upon one the weight of history, the decision to tell the story in extended flashback form, and return to Dr. Black periodically, reduces the overall climate of fear and tension. However I fully understand why Clark chose to do this, for this is precisely the narrative strategy that James adopts in the short story. In terms of fidelity to the source material The Stalls of Barchester is unequalled in the entire series, but sometimes it is necessary, and in this case vital, too adopt a different strategy. I am glad to say though that this oversight does not have a terminal effect on the story, and The Stalls of Barchester still ripples with moments of muted terror. One positive effect it does have is to create several mini cliff-hanger moments, such as when the clawed hand reaches out for Haynes, or when the tormented Archdeacon is being followed through the cloisters of the cathedral. 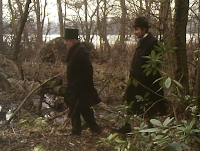 In an interesting development The Stalls of Barchester is not without moments of ironic and pithy humour. It is the only play in the entire series to display a black and sardonic wittiness. Much of this revolves around Haynes’ aged predecessor Archdeacon Pulteney (Harold Bennett) who clutches doggedly to life as if to frustrate his ambitions. At the age of ninety two he finally bows out, but not without the help of Haynes, who blackmails the housekeeper to engineer an accident that proves fatal for the ancient Archdeacon. Haynes has achieved his promotion, but in order to get it, he now has blood on his hands. From this point onwards Haynes exists in an odd world of shadows and lurking fear, a world in which the angelic refrain of the choir is not enough to pierce the supernatural visions that torture the hapless man of rationality. In one of James’ better twists the very fabric of the Cathedral itself becomes the conduit for the spectral visitations to sink their claws into the guilt ridden man of the cloth. Furthermore this development, which sees the stalls constructed out of the oak of a ‘Hanging Tree’ that Christians used to hang Pagans from, deftly entwines a wonderful statement on religious hypocrisy. 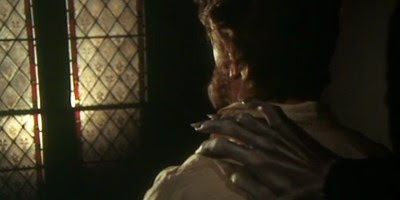 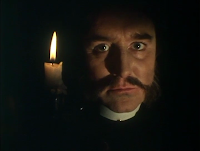 The Stalls of Barchester was shot on 16mm and the slightly graining quality of the image adds immeasurably to the effect. I could think of no fate worse for a film such as this than a transfer to high definition. With a budget of less than £10,000 Clark is forced to improvise and at every turn he succeeds. The editing for example is a master class in how to create tension with a quick cut. Take for example the sequence where Haynes believes he is being followed in the cloisters of the Cathedral; with each sudden cut Clark alters the camera angle, we see Haynes from the left, the right, from a low angle, and a high angle, before eventually the camera is looking down on him. The overall effect created is of the omniscience of the ghostly presence that has been haunting Haynes. This is enhanced by the wonderful sound design of Richard Manton, who utilises ethereal voices, whispers, and footsteps to eerie effect. So whilst The Stalls of Barchester falls down in certain areas, and rarely is it described as one of the best of the series, it does establish many of the strategies, techniques and formal aspects that would be honed and developed in later productions. This is a major contribution to the series for one reason; were it not for the success of this episode none of the others would have been commissioned, and for this alone The Stalls of Barchester must be awarded special significance.