Generally speaking the poliziotesschi/Euro-crime cycle can be divided into four distinct thematic and narrative strands. The first explores the power struggles, relationships, and group dynamics of organised crime mobs, and are best represented by the early formative crime flicks of Fernando Di Leo; most notably Milano Calibro 9 (1972), and The Boss (1973). The second explores the manner in which innocent members of society, frustrated by the inactivity of the police, take the law into their own hands, and seek retribution through violent means; a good example is Street Law (1974), which took as its inspiration Michael Winner’s defining statement on vigilantism Death Wish (1974). The third and most pervasive strand was inspired by the rule breaking rogue cop seen in Dirty Harry (1971), and these films are marked by themes of police brutality, sticky networks of bureaucratic red tape, and detectives frequently breaking the law in order to maintain their own sense of moral equilibrium; almost any Italian crime film of the 1970’s featuring the talents of Maurizio Merli fits this description. These three narrative types are united by high octane energy, stylised shoot outs and fistfights, dangerous chase sequences, and pulse pounding soundtracks. 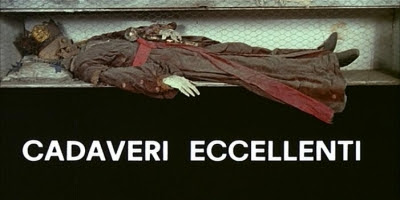 But there did exist a fourth narrative stratagem that eschews the style and excitement of the other three, in favour of a more sober, thoughtful, and intelligent approach. These are films that are concerned with paranoia and conspiracy, slow burning political thrillers which cultivate suspicion and mistrust in the most innocuous of environments. A director commonly associated with these types of pictures is Damiano Damiani; thanks chiefly to Confessions of a Police Captain (1970) and How to Kill a Judge (1976), though the defining statement in this subset may well be Elio Petri’s Investigation of a Citizen Above Suspicion (1970). The obscure Illustrious Corpses was directed by respected and acclaimed filmmaker Francesco Rosi, a man who was no stranger to socially committed films exploring political shortcomings and conspiracies. At this point in his career Rosi was enjoying an excellent run of critically lauded thrillers; titles included the unconventional and memorable The Mattei Affair (1972) and the character based gangster flick Lucky Luciano (1974). Illustrious Corpses completes this impressive triumvirate, even if the film itself is probably the most conventional of the three. 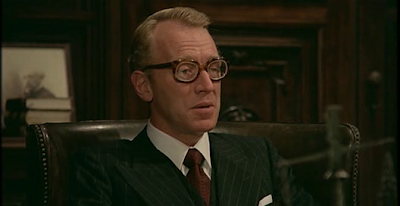 The source material for the three screenwriters (Rosi himself, Tonino Guerra and Lino Ianuzzi) was the novel Equal Danger (aka Il Contesto, 1971) by Sicilian novelist Leonardo Sciascia, so it is clear from this that a deep commitment to socio/political issues would be a given. One is to presume that Rosi set his adaptation in Sicily, and the location shooting in Naples would seem to confirm this, though oddly enough the setting is never actually stated or confirmed in the film itself; its relationship to Damiani’s thematically similar How to Kill a Judge extends to the mutual use of a plot device; the assassination of a supreme court judge. The film opens with this individual visiting a mausoleum of mummified corpses, dead Catholic dignitaries who have been preserved by the church to serve as a reminder of their importance. Perhaps the judge fancies himself as ‘illustrious’ enough to join them? Within minutes of leaving this eerie and disturbing space he has been shot dead in the street. Rosi’s film chooses to up the ante somewhat on Damiani’s; the fate of the judge in that film turns out to be a crime of passion, but one which nevertheless highlights the mafia’s involvement with the judicial process. In Illustrious Corpses the conspiracy goes much further, and becomes even more problematic for the forces of good when several more important judicial figures are eliminated. 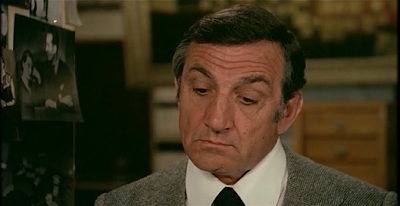 The investigating detective is Inspector Rogas (Lino Ventura) who brings with him the slumped shoulders and world weary cynicism of a cop who has seen it all. But Rogas’ deferential attitude to authority figures and understated approach to detection masks a fierce intellect and an open minded attitude to politics which makes him a receptive audience to his friend Cusan (Luigi Pistili) who is a high ranking member of the Italian communist party. Initially at least Rogas is drawn into a rather straightforward investigation in which a man wrongly convicted of a crime becomes the principal suspect, and while this is ultimately a blind alley, the episodic nature of Rogas’ investigation, which takes him to several cities, adds a great deal of local colour to the film, not least as a result of several encounters with peculiar and eccentric individuals. The best is a judge with a hygiene fetish and a left hand that seems to have a life of its own; as the judges continue to drop like flies so increases the murky complexities of the case. Rogas’ superior (Tino Carraro) is reluctant to support the increasingly bewildered cop and is convinced the perpetrators belong to radicalised socialist groups. But something about this doesn’t quite ring true to Rogas, and before long he finds that his superior is someone unworthy of his trust. 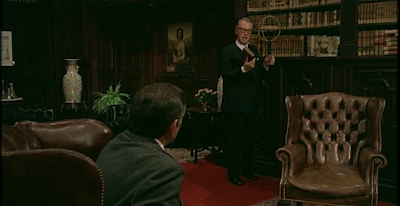 The film succeeds admirably in creating an atmosphere of omnipresent evil. The use of telephone bugs and covert surveillance brings favourable comparisons to Francis Ford Coppola’s The Conversation (1974), though the encroaching sense of despair and the political and social disenfranchisement of Illustrious Corpses gives it a unique impression of deep rooted institutional corruption. The exact nature of the conspiracy, its aims and expected or desired outcome, remain obtuse and unclear throughout. In a way it doesn’t matter, this is a film about the nature of political conspiracies, and the innocent human beings that either unwittingly stumble upon it, or are actively used as pawns within the game. Fernando Rey’s security minister continually refers to the battle between right wing government forces and the radicalised left as a game, and the puzzle like structure of the film extends this theme to the formal presentation. The excellent cast is rounded off by Max Von Sydow who plays a supreme court president happy to listen in to bugged conversations, and even happier to espouse his highly disturbing and fascistic philosophy on the nature of political dissent; horrifying it is, but makes for arguably the stand out scene in the film. Illustrious Corpses may be too broad and generalised in its central thesis, and it certainly does suffer from a lack of excitement and pace, but Rossi’s striking compositions, the pervasive ambience of conspiratorial evil, the deeply cynical finale, and a series of excellent and committed performances, make this an essential 1970’s Italian political thriller.