A few years back I was asked by a fellow academic to decide upon my favourite British film of all time, and then write an appreciation of it, for a book that unfortunately never saw the light of day. I chose The Long Good Friday and as I think about it now, several years on, my decision would probably remain the same. My interest in British genre cinema goes far beyond horror; indeed at one time I had a greater interest in home-grown gangster, noir, and science-fiction films than I did with a lot of generically retrograde horror pictures. The challenge of a genre film is in providing something innovative and new within a restrictive narrative and iconographic environment; this is made even more challenging when that genre then has to be adjusted to the meta-narratives and cultural concerns of a national cinema. In some genres, such as the western, this is impossible. But the syntactic concerns of the American gangster film seem to fit the gritty social realism that marked large swathes of British cinema like a glove. The Long Good Friday is an innovative gangster picture that isn’t concerned with the rise of the criminal, but instead completely focuses on his fall, and it is a fall that is made supremely entertaining by Bob Hoskins’ apoplectic and bemused rage. 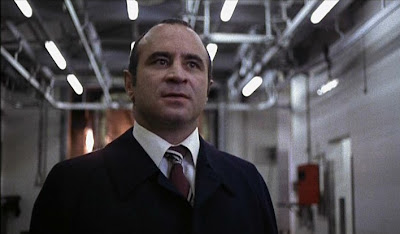 But we are here to discuss the soundtrack which was composed by Francis Monkman. I’ve read accusations of datedness in the past in relation to the music, but The Long Good Friday as a whole is completely dated anyway. The political and social ideology explored in the film is one which would become firmly associated with the leadership of Margaret Thatcher throughout the 1980’s. That Thatcher had only just come to power when the film was being written and then subsequently released, illustrates the prophetic nature of the screenplay. There isn’t a great deal of difference between Harold Shand in 1980 and Albert Spica in 1989, even though the grotesque gangster of Peter Greenaway’s The Cook, the Thief, his Wife & Her Lover is more of a vulgar caricature of Thatcherite values. So the electronic synth based music of Mr. Monkman helps to ground the film in the early 1980’s, and this is very important. Monkman first emerged as a name of repute in the progressive rock group Curved Air; they achieved their five minutes of fame with the excellent hit single Back Street Luv, before Monkman moved on after contributing keyboards and guitars to their first three albums. In 1979 Monkman joined Sky, a super group of sorts formed by classical guitarist John Williams and session musician extraordinaire Herbie Flowers. But the success of The Long Good Friday and the allure of solo projects saw Monkman leave the group after two albums.

Oddly enough Monkman did not make a career out of soundtracks, despite the occasional brilliance of this score. I’ve chosen four compositions to represent the soundtrack, and it was impossible for me to omit the most famous piece, however I’ve always preferred the arrangement of the title music that plays over Shand’s despairing face at the conclusion of the movie which goes under the title Taken. The other three tracks show off Monkman’s moody and pulsating electronic textures. Of particular note is At the Pool which creates an eerie shimmering atmosphere that complements one of the films most disturbing scenes. The soundtrack was originally released on LP in the UK in 1979 on Spartan Records, and was reissued on LP and for the first time on CD in 1989 courtesy of Silva Screen. A subsequent CD release on the Metrodome label in 2000 was backed with a selection of tracks inspired by the film, but the source material was ripped from vinyl and is of low quality, so should be avoided. If you’re looking to add this title to your collection then you can do no worse than the Silva Screen release from 1989. And now after all that babble, lets enjoy some music. 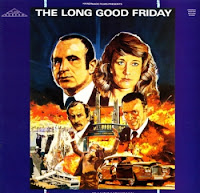 
Posted by Shaun Anderson [The Celluloid Highway] at 18:44