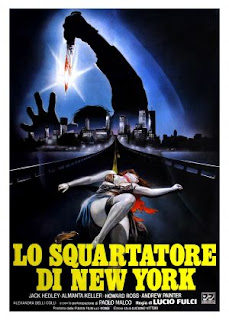 
A viewing of Lucio Fulci’s scandalous The New York Ripper has almost become something of a rites of passage for horror fans looking too experience the more extreme and unpleasant end of the spectrum. It wields a strange repulsive fascination not dissimilar to controversial ‘Video Nasties’ such as Cannibal Holocaust (1980) and I Spit on Your Grave (1978); to see them, and to own them in uncut prints, is seen as something of a badge of honour in some quarters. Fortunately such juvenilia are not to be found on these pages, and my encounter with this repugnant artefact came as a result of a piece of research into British film censorship. It’s not a film I would watch by choice, but then who would? Although it is often situated within the giallo cycle I find this position to be nominal at best. By 1982 the giallo was no longer a major force of influence within the horror genre, if anything gialli were absorbing influences from elsewhere; most notably from the American slasher film. A reversal of positions as it was, and one which would have a damaging effect on the giallo as films increasingly took on the appearance of cut rate slasher flicks. The New York Ripper is a very good example of this trend. Its prevailing influence was William Lustig’s squalid Maniac (1980) rather than The Bird with the Crystal Plumage (1970) or Deep Red (1975). 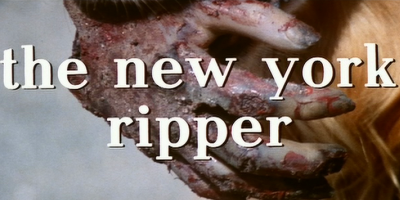 Although Lucio Fulci often gets credited, or should that be lambasted, with the rampant misogony that is on display in The New York Ripper, the reality is that Gianfranco Clerici, Vincenzo Mannino and Dardano Sachetti are equally responsible. These four men collaborated on the screenplay for the film, and if you think Fulci has a history of hatred and violence towards women, checking out some of the other writing credits of Mr. Sachetti! There is also the fact that images of sexual humiliation, degradation, and violence toward women were actually wrapped up in the expectations of the cycle/genre; so instead of spending a paragraph chastising Fulci and thus making myself feel better about watching such a vile film, I’m going to forgive Lucio for the ever present spectre of misogony that haunts this production. The film actually opens with a rather amusing gag; instead of retrieving the stick his owner as thrown into a bush, a grinning dog returns with a putrefying hand for his master! The expression on the poor chaps face is worth a thousand words! Unfortunately things deteriorate quite rapidly as we are introduced to jaded and cynical detective Lt. Fred Williams (Jack Hedley) who is slowly buckling under the pressure of the latest serial killer case to cross his desk. The killer exclusively targets women of ill repute, and if the knife used to eviscerate them isn’t bad enough, he babbles incoherently like a duck! 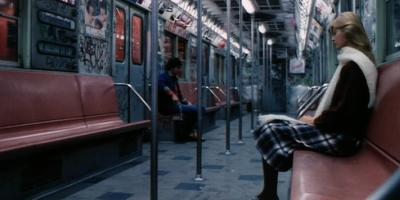 The killings are quite rightly notorious, and they form the grotesque centrepiece of the movie. We get to watch one poor unfortunate have a broken bottle rammed between her legs, while another gets her stomach cut open, a third victim is slowly tortured with a razor blade; a sequence which is still problematic enough for the British censor to cut it. It has to be said that none of this is unexpected; this is after all a Lucio Fulci film. However the subplot involving well-to-do Jane (Alexandra Delli Colli) may raise a few eyebrows; despite a background of wealth and privilege Jane spends her mornings in grimy bars getting sexually humiliated by sleazy Latinos, one of whom has ‘silver toes’, and her afternoons in 42nd Street x-rated fleapits watching pornography. This wouldn’t be so bad were it not for Fulci’s customary, and in this case revolting, close ups which linger on Delli Colli’s quivering lips as she strokes herself to orgasm. The screenplay is completely determined to implicate every character in the sleaze and detritus of deviant or perverted sexuality. The problem though is that the screenplay doesn’t differentiate between harmless forms of sexual expression, such as those enjoyed by the red herring Mickey Scellanda (Howard Ross), or Dr. Davis’ (Paolo Malco) closet homosexuality, and the murderous antics of the duck obsessed fiend. This is precisely why this movie is so repugnant. It tries to communicate a message that all the characters are as bad as each other, and this just isn’t so. 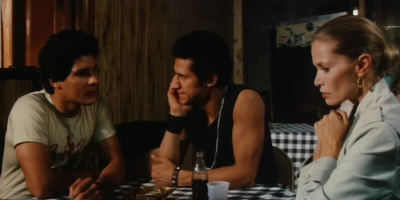 However the decision to shoot on location in Times Square amid the seedy peep shows and porn vendors is a critical element in developing a culture of filth and depravation. Fulci’s stock-in trade of pans, zooms, and tracking shots explore the disgusting scum ridden streets, garbage strewn alleyways, and graffiti covered subway trains and concludes that only the worst type of human trash would thrive in such an environment. In stark contrast sit’s the beauty of Columbia University which is utilised to make certain parts of New York City seem even worse than they are. It’s a very effective spatial strategy, overflowing with symbolism and metaphor. In a perverse way this is one of Fulci’s most impressive looking films; he manages to get beneath the seething vitriolic street life of New York City, and the film exists as an effective document of the city in the years preceding the clean up. This doesn’t save the film though from slipping into the usual weaknesses that plague Fulci’s work; stilted dialogue, dire performances, and a singular lack of suspense. This isn’t helped one jot by Francesco De Masi’s bland, and at times oddly upbeat, TV cop show score. I did have a problem with the killer’s motivation, and while the writers should be commended for trying something a little different, I found it ultimately to be quite absurd. For a film that wallows so unremittingly in the shit of deviancy, and don’t forget even buying a gay porn magazine is enough to implicate a character in this sewer, I think a more appropriate motivation for the killer would have been that they simply got off on it!