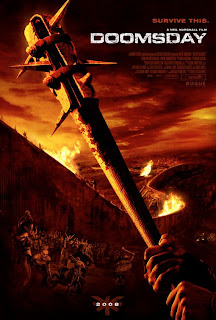 
A recent status update by a ’friend’ on Facebook proclaimed Newcastle born writer/director Neil Marshall a genius. I was somewhat surprised by this, is Mr. Marshall really to be considered in the same light as Albert Einstein, Isaac Newton, and Leonardo Da Vinci? Naturally I had to challenge this cretinous stupidity, but before I did, I paused and wondered if perhaps this individual was basing their statement on his first two films Dog Soldiers (2002) and The Descent (2005). Imagine my horror when I discovered they had not only seen Doomsday, but saw it as the clinching evidence of his genius. My polite disagreement resulted in him removing me from his friends list…go figure! Dog Soldiers was an enjoyable werewolf yarn, a mild distraction which benefited from the eerie isolation of the Scottish highlands. The subterranean monster movie The Descent was less successful in my view and somewhat overrated. There was certainly evidence in these first two films that Marshall had the potential to lead a new wave of British horror, which makes his third film Doomsday even more perplexing. The word homage is overused, it is a post-modern device utilised in my opinion, for the purposes of giving legitimacy to unoriginality. There is a fine line between homage and the mindless plundering of the imaginations of other writers and filmmakers. 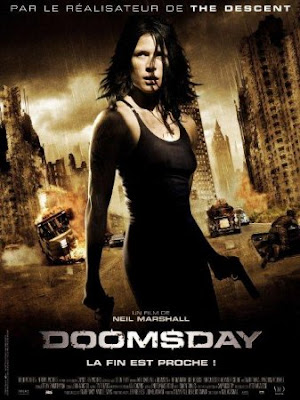 In Doomsday Marshall quotes, borrows, steals, and references from such a number of sources (noticeably all the films he does rip off are superior to his) in such an unimaginative and uncreative way that this feels like a feature length exercise in plagiarism. Marshall packs his convoluted mess of a film with a gallery of grotesque characters, and grotesque performances, and shamelessly enters on occasion the debased torture trash territory of adolescent filmmakers like Eli Roth. The plot (if you can call it that) sees Scotland placed in quarantine behind a giant military patrolled wall due to a highly infectious disease and is a bungled bastardisation of Escape from New York (1981) and 28 Days Later (2002). The film overflows with grim faced and serious performances, and with characters with stupid biblical names like Kane and Eden, Marshall’s attempts at symbolism are beyond laughable. His attempts to create gravitas and depth through a sloppy Malcolm McDowell (no stranger to crap films) voice over is a storytelling device quickly forgotten as Marshall sets about putting his Lara Croft clone (the horribly po-faced Rhona Mitra) into a series of ridiculous action sequences. This is a dystopian future, but the 1980’s goth retro look only adds further confusion. The use of 80’s fashions, style, and music makes very little sense, as does the need to make the villains cannibals. 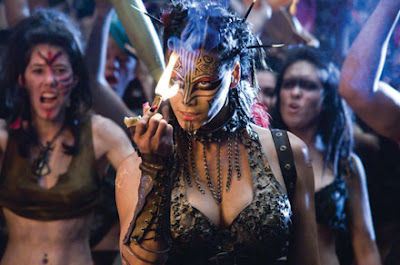 Doomsday isn’t a total dead loss though. Marshall does possess some filmmaking talent, and he shows a particular flair in this film for exciting action sequences. Most of these sequences make no sense, but at least they are exhilaratingly mounted. A chase scene on an open country road played out to Two Tribes by Frankie Goes to Hollywood is superbly edited and the highlight of the film. Marshall also manages (I’m not sure whether through accident or design) to address current anxieties about Anglo-Scottish relations. This is a prescient topic in a political age that constantly positions Scottish independence to the forefront. The total rejection and subsequent isolation of Scotland by the English parliament in a time of great national crisis distils a number of anxieties. That the surviving inhabitants of Scotland become either goth cannibals or mediaeval throwbacks doesn’t say much for a Scotland no longer part of the UK. Marshall pitches the cynicism about central government effectively, but it is somewhat undermined by Bob Hoskins’ atrocious performance. The allegorical leanings of the narrative may save Doomsday from the dustbin of obscurity it deserves to reside in, but the for the future of British horror/science-fiction this is a creative regression.
Posted by Shaun Anderson [The Celluloid Highway] at 14:56