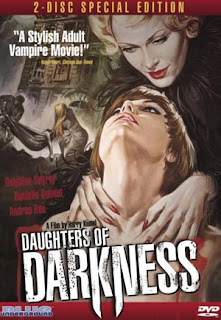 aka:
Les lèvres rouges
Blood on the Lips
Children of the Night
The Promise of Red Lips
The Red Lips


The traditions of the horror genre and those of art cinema are not the mutually opposed spheres of representation that one might at first glance think. Both horror and art films share an interest in transgression. These transgression’s might be political, social or cultural, but the form they normally take is through expressions of violence and sexuality. Art films sometimes use this thematic trajectory for a grander metaphysical or philosophical vision, whereas horror films enjoy the mess. The horror film takes pleasure in the breakdown and revels in the gooey stuff, but ultimately there is recuperation and conservatism. Radicalism and challenges to taboos are far more common in art films. But this is not to say that horror films cannot highlight a political or social anxiety, they just very rarely offer ideas to remedy the problems that have arisen - aside from the mindless destruction of the threat. These distinctions and commonalities are important things to consider when discussing Harry Kumel’s 1971 film Daughters of Darkness, because this is one of the few films that successfully cross pollinates the two forms. 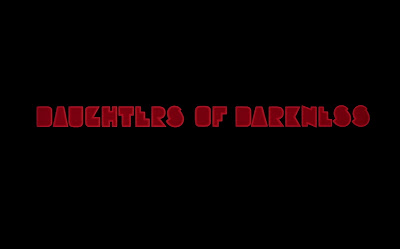 ﻿The first thing to say about this Belgian picture is that it is a very good film indeed. It is directed with style and panache, and crackles with electrical sparks of repressed sexual energy and a barely suppressed desire for deviant sadism and the pleasures of morbidity. In the same year Hammer put out Countess Dracula which also explored the actions of the Countess Bathory and is primarily concerned with pandering to the expectations of the genre. The result are characters without depth and dimension, a lack of engagement, ultimately a beautiful looking, but emotionally hollow experience. Because Daughters of Darkness self-consciously utilises the narrative strategies of the art film within the framework of a genre it has both a visual beauty and a thematic depth brought about by considered characterisation. This combination also makes the film highly unconventional, and this is no doubt a major reason for the cult following it has amassed. Although this is often cited as an example of the ‘lesbian vampire’ film, the vampirism is regularly understated, and besides the story of The Countess is that of a woman who drank blood, there was nothing supernatural involved. 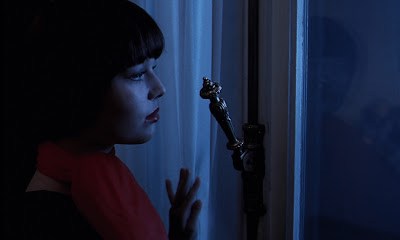 ﻿The casting of Delphine Seyrig seems a self-conscious touch on the part of Kumel to create a resonance to Alain Resnais’ Last Year in Marienbad (1961). It is no coincidence I think that the major setting of his film is an opulent hotel in Ostend. With these associations in mind the hotel represents a liminal space, a bubble of stasis and immobility. Although the film is given a contemporary setting the anachronistic presence of the Countess and the mediaveal baggage of torture she brings with her creates an atmosphere of decadent timelessness. Ostend is a forgotten town in the winter time, an icy and unforgiving shard of landscape, colourless, devoid of life, and the mechanisms of modernity. The newly weds Stefan (John Karlen) and Valerie (Danielle Ouimet) have it all to themselves, but their’s is a relationship already fragmenting due to Stefan’s morbid interest in corpses, and a rather unhealthy attachment to a fleetingly glimpsed mother. When the Countess and the young girl who idolises her (Andrea Rau) swan majestically into the hotel restaurant the knives are sharpened for a battle between the forces of matriarchy and patriarchy. 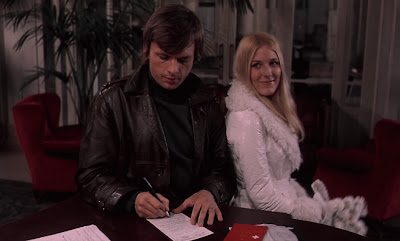 One of the most surprising elements of this film is the sheer grotesquery of Stefan. This is a violent and abusive man, with an unsavoury interest in dead bodies, who gets incredibly excited when the Countess describes in graphic detail torture techniques, techniques we know full well she has performed on countless victims. The sexual tension and eroticism is consistently allied to violence, which is one of the more troubling and problematic elements of the film. Stefan is aware of the threat the Countess poses and acts in the only way he knows; through violence and intimidation. It is this decision which costs him his life, and I for one was glad to see the back of him. The exploration of power and seduction is thoughtful, and there is no place for misogynistic machismo in the Countess’s world. 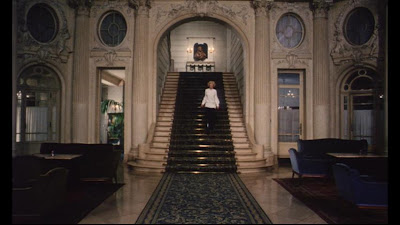 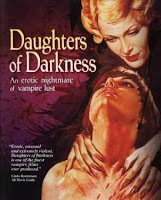 A mention must be made for the technical accomplishments of this film. The symbolically informed colour scheme brought to life by the cinematography of Eduard van der Enden which privileges reds and greens and imbues those colours with a sense of death and regeneration is quite beautiful. The art direction of Françoise Hardy is sumptuous and brings to life both the aristocratic decadence of the setting and the emotional desolation of time and memory. The costumes which were designed by Bernard Perris are wonderful, especially those worn by the Countess and the beautiful and enigmatic Ilona who worships her. There is an argument that Daughters of Darkness is slow and talky, perhaps even ponderous and pretentious. It is also very grim, it depicts married life as an abusive hell, with the alternative of a life as a vampire a far more attractive proposition. These I think are minor quibbles by those who probably prefer horror of the Countess Dracula mould. If you’re looking for something slightly more stylish and intelligent then look no further.
© Shaun Anderson 2010
Posted by Shaun Anderson [The Celluloid Highway] at 13:36