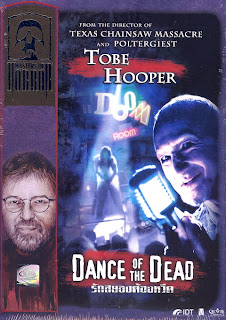 
One has to admire the bravery (or possibly outright gall) of series creator Mick Garris in inviting several washed up has-beens to contribute direction to the first season of Masters of Horror. There is a certain amount of back slapping and arse kissing endemic in a project like this, because if one were to be entirely objective it about there is no way that in 2005 Tobe Hooper would qualify as a ‘Master of Horror’. Hooper has made lots of horror films yes, but he hasn’t made a single good one in my lifetime. In fact I would argue that Hooper has only made one creatively successful horror film and that was his astonishing debut picture The Texas Chainsaw Massacre (1974). Unlike his contemporaries in the 1970’s Hooper peaked instantly. His career since has been a pallid and depressingly dreary attempt to recapture the ferocity and creativity of his first film. In this respect Hooper’s later career must surely rank as the most disappointing in horror history. The promise of his first film was destroyed almost immediately with his lacklustre thematic follow up Eaten Alive (1977). Somewhat surprisingly though he did manage to direct an excellent television mini-series adaptation of Salem’s Lot (1979), proving that he could adapt to the strictures of television with aplomb. Unfortunately Salem’s Lot has proven an exception in Hooper’s career, and though some horror fanatics might cite The Funhouse (1981) (I’d prefer to watch the grass grow) and Poltergeist (1982) (Hooper pimping himself out to Spielberg whose themes dominate the film) the reality is that these films are largely inconsequential and bereft of ideas and intelligence. But based on thirty years of shocking mediocrity Mick Garris invited Hooper to take part in Masters of Horror. So we have thirty years of cinematic garbage from Hooper, what would his episode Dance of the Dead be like?…believe it or not its utter garbage! 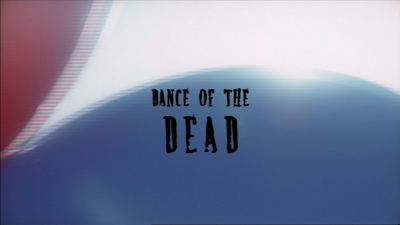 On paper at least Dance of the Dead had potential. The episode was based upon a short story by Richard Matheson first published in 1954. Matheson has always translated quite well to the screen, and he himself had a long and fruitful relationship with the cinema. It was adapted for the screen by his son Richard Christian Matheson, whom one would hope would have an affinity for his father’s work. But any nuances and subtleties this dystopian tale of post apocalyptic struggle might have had are totally undermined by Hooper’s bag of show off formal tricks. Nevertheless it opens promisingly with a flashback to an innocent scene of young Peggy’s birthday party seconds prior to an oncoming nuclear holocaust. As the fallout rains down and melts the flesh of screaming adults and children, Peggy and her family hide in the house and watch the ensuing carnage. This sequence would have been unsettling in the extreme had it been shot with taste and patience, but for some reason Hooper feels the need to indulge in fragmented zooms and fractured editing. This is a style that permeates proceedings and I understand the director’s intention to create a sense of breakdown, the formal rupturing of the image acting as a mirror to societal collapse, but after a while it just becomes very irritating and distracting. Some years later the social firmament has crumbled away to the extent that drug addled youngsters mug pensioners for their blood, in order to sell it on to a grotesque manager of a nightclub, who uses it revive the dead in a sickening showcase of cadaverous exhibitionism. 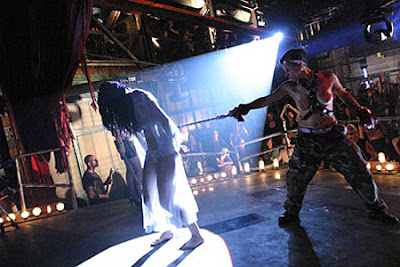 The MC is at least played by Robert Englund who imbues his gross role with the sort of lip smacking relish to which we have been accustomed too. Unsurprisingly he emerges as the most lively aspect of this production, despite the characters own closeness to death and need for narcotic relief. The moral core of the story centres on the grown up Peggy (Jessica Lowndes) who rots away in her mothers diner and is dominated by the shrill and hypocritical matriarch who has been hiding a terrible secret. Peggy is introduced to another life, one of alcohol, drugs, fast cars, and the necrophilia tinged delights of The Doom Room. Instead of recoiling in abject disgust at the filth of humanity, it resonates because it is the new reality. Fortunately she manages to hook up with the one character Jak (Jonathan Tucker) who isn’t a total sleaze. He more than any other character represents a hope for the future, a man who has adapted to life in a chaotic and disordered society, but hasn’t lost hope or a sense of moral worth. The future is depicted as a grungy/gothic hell of heavy metal and sadism. This is complemented by a typically head splitting soundtrack by Billy Corgan. This is distinctive enough, but why? The film totally fails to explain away why youth culture has taken this turn, instead we have hollow aesthetics devoid of meaning. 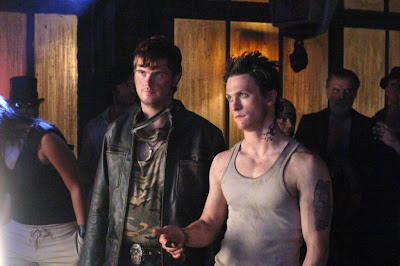 Hooper does manage to create a number of nightmarish images. The sight of re-animated human corpses being dumped into a metal bin and set alight by a pair of mocking goons is one such troubling image. The sight of Robert Englund fondling twitching corpses, and the intimation that he is being fellated by one is another. But the general grotesquery of this episode (which extends almost without exception to every character) has the feel of Hooper trying on a bit of one-upmanship to the other directors in the series. Few episodes of Masters of Horror possess such a nihilistic, repugnant and irredeemable atmosphere as Dance of the Dead, but then I’d like to think the other episodes have ambitions beyond the type of mindless repulsion Hooper is after. In its favour is a sense of carnivalesque breakdown, a sense of disorder and disunity which is effectively conveyed. But Dance of the Dead never manages to escape the vanity and hubris of a director determined to show off what little talent he has.
© Shaun Anderson 2011
Posted by Shaun Anderson [The Celluloid Highway] at 15:23