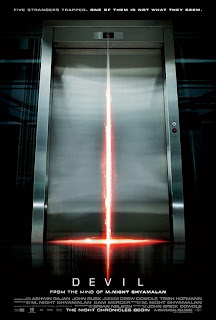 
The stock of writer/producer/director M. Night Shyamalan couldn’t be much lower after a series of feeble and derisory films that have contrived to make his first two (The Sixth Sense [1999) and Unbreakable [2000]) seem half decent. The reality is that Shyamalan has yet to direct a good film, and a film that has his name attached to it is only fit for the trash collector. That is until the release of Devil, which was based upon a story by Shyamalan, and is refreshingly bereft of his normal posturing and pretence, and has a narrative which isn’t totally reliant on tricks. It is still recognisable as its authors work because of a central gimmick which entraps five total strangers in a malfunctioning elevator. If the claustrophobia, proximity, and fear of this situation isn’t enough, one of the occupants also happens to be the devil. This central proposition is intriguing enough to carry the whole film, and the film is blessed with a director who approaches the material with economy and a briskness of pace. I’m not sure how John Erick Dowdle got this assignment, because his previous film Quarantine (2008) was so appalling that new adjectives had to be invented to describe just how bad it was. But Dowdle emerges as the unlikely hero of Devil because of an efficient and smooth filmmaking approach that mirrors the simplicity of the story. The screenplay by Brian Nelson - the ‘brain’ behind moronic flotsam such as Hard Candy (2005) and 30 Days of Night (2007) offers levity to the restricted confinement of the elevator with two other narrative strands offering a police investigation, and the efforts of various professionals to free the unfortunates who are trapped. But Nelson does make one decision which almost destroys Devil before it has an opportunity to get going. 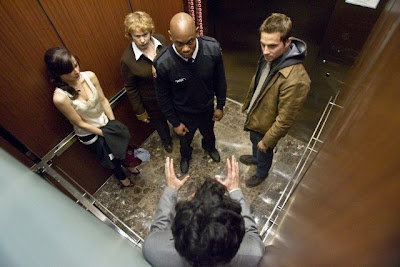 The film opens with a dislocated upside down shot of the Philadelphia skyline (a shot which is reversed at the end of the film when the devil has departed) over which a narrator recounts a folktale entitled ‘The Devil’s Meeting’. This is all well and good, but this pretty much gives the game away before we even meet the characters. The question as to who exactly is the devil remains, but the films title and the supporting narration throws this information into our faces. This is a film about the devil…yeah we get it! It seems that to compensate for the daft plot twists of earlier films Shyamalan is determined to reinforce the obvious in this film. The narration rears its head at inopportune times throughout the film, and it almost always dilutes suspense and tension. This is a major weakness which the film never quite manages to shake off. The principal character is Detective Bowden (Chris Messina) a man gifted in the art of deduction who is driven by the unbearable memory of the hit and run that robbed him of his wife and daughter. Bowden’s resentment and thirst for vengeance led him to the bottle and the precipice of ruination, but the result of these travails is a man marked by a dogged determination who feels the need too atone perhaps for the fact that he wasn’t there to protect his family. Bowden is a strong protagonist, but one who is slow in realising that the devil is their to claim the soul of the one who has caused him so much pain and heartache. In the shape of Chris Messina, Bowden is likable and engaging and has a realistic character arc that ends in forgiveness rather than retribution. 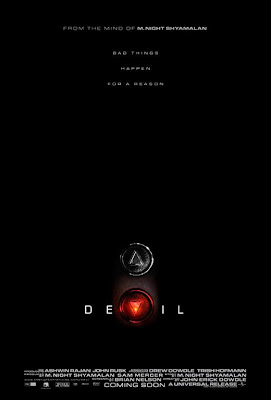 ﻿The screenplay cleverly implicates each of the five people in the lift, and gives everyone an opportunity to display possible devilish characteristics. The investigation by Bowden which gives real and concrete reasons for each of the trapped people to be committing murder is as interesting as the supernatural reasons. This would seem utterly pointless in a film called Devil, which has constantly narrated events prior to their happening, but this is a film about Bowden and his systems of belief and how he achieves closure through forgiveness. The biblical symbolism and old testament spiel is possibly one of the few unwelcome aspects of Devil, I’d have much preferred the story too explore the devil’s relationship to urban modernity through a more detailed examination of spatial metaphors. Although the film makes modern technology and architecture a tool of subversion for the devil to aid his concealment, any wider statement is unforthcoming. But the isolated locations serve to create tension, unfortunately though it is always tension without suspense. 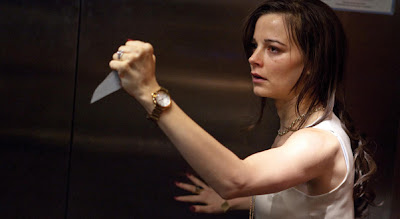 The scenes in the elevator are suitably cramped, and the shots on CCTV are imbued with flickering lights, grainy footage, and when a murder is being committed total darkness. These effects work very well, and much is achieved through a minimalist attitude to filmmaking. In fact everything about Devil is minimal - the budget was a mere $10,000,000, the locations are few, and the performances are restrained. I imagine that the name of M. Night Shyamalan could put some people off watching, but Devil totally lacks the self indulgent and ill considered mysticism of his directorial efforts. It is not totally devoid of these trappings as the character of Ramirez indicates, and with its themes of destiny, fate and redemption it is clearly a product of the Shyamalan universe. This is intended as the first of several films to be made under the Night Chronicles banner, and this is a very effective start which makes me look forward to the next.
© Shaun Anderson 2011
Posted by Shaun Anderson [The Celluloid Highway] at 21:20