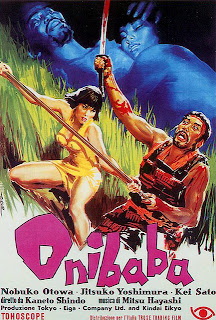 AKA:
Devil Woman
The Hole
The Ogress
The Witch
The Demon


Legendary Japanese filmmaker Kaneto Shindô directed his 45th feature film Ichimai no Hagaki in 2010 at the tender age of 98. Born in Hiroshima in 1912 Shindô has also written some 158 screenplays, making him easily one of the most prolific filmmakers in world cinema. Shindô’s failure to secure the type of distribution enjoyed by Kurosawa, Mizoguchi, and Ozu remains a mystery. His early films are slightly more visible in the West. In recent times we have enjoyed pristine DVD presentations of The Naked Island (1960), Onibaba (1964) and Kuroneko (1968) and they have afforded us a glimpse into a highly stylised and expressive formal style that is both challenging and invigorating. The latter two titles have also illustrated Shindô’s ability to meld this formal eloquence with popular genres and past theatrical traditions. However the unavailability of Children of Hiroshima (1952) still remains a mystifying aberration. It is certainly the case that as the 1960’s wore on Shindô’s work became less distinctive and his interest in social purpose took a back seat to explorations of sexuality. But as we saw in Nagisa Oshima’s In the Realm of the Senses (1976), sex in its purest form can be a potent political and social weapon. The success of his quasi historical horror film Onibaba isn’t particularly surprising as it retains just enough generic signifiers to satisfy western audiences, and possessed the added draw of an unusually frank exploration of frustrated sexuality.

Shindô also wrote the screenplay for Onibaba and he conjures up a rich and troubling vision of life in 14th Century feudal Japan. This is a country torn asunder by civil war, a land of ruptured family units and harsh poverty. The unifying concern for those people on the fringes of society are food and survival. Shindô paints a broad canvas exploring the extent to which people will go in order to ensure their survival. The levels of resourcefulness are admirable, even if the outcome is death and moral decay. One of the most shocking moments of Onibaba occurs in the first few minutes. We follow two battle hardened and exhausted samurai as they fight their way through the strangulating and ever present reeds and grass of a swamp like environment. Although they can barely stand, their armour and their swords communicate an expertise in the art of killing. From nowhere they are speared to death. We expect to see their opponents in war emerge from the reeds, but instead we see two women; one old and one young. The nobility of the samurai is no more. They lie dead at the feet of two women who add to their humiliation by stripping them of their armour. This is an undignified end indeed, which only gets worse when they are unceremoniously kicked into a hole in the earth which the women have utilised on more than one occasion. Shindô maintains this attitude to samurai throughout the film; they are the root cause of the problems, and are punished and treated with the disdain they serve. 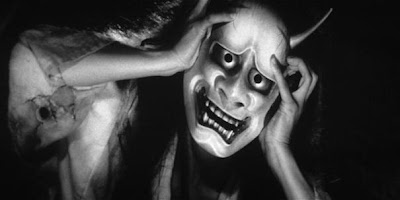 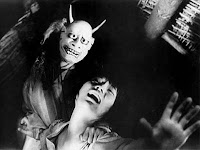 The two women (superb performances from Nobuko Otowa and Jitsuko Yoshimura) are motivated purely by the need for food. The absence of a man who was both son and husband has led to desperate measures. But this is commerce in the age of warfare. The samurai become a commodity that the women can sell, they have managed to create a mental barrier that has divested these men of humanity, they are now simply fodder in a consumerist machine. At this point the women do not appear to be paying a moral cost for their survival, but when sex rears its head in the shape of returning soldier Hachi (Kei Satô) the tone of the film shifts, and we implicitly know that behaviour from now on will have a cost. The sexual hunger of all three characters becomes more rapacious and consuming than any hunger for food. The younger women is able to file away the death of her husband very rapidly in the face of her own sexual frustration. The older women meanwhile begins to develop a corrosive sexual jealousy (in one scene she even uses a tree to relieve her torment) and Shindô presents this in incredibly sensual and erotic tones. The heat, the lashing cooling rains, the reeds whipping at the young woman’s body as she runs to Hachi, the jealous rage of the mother, and the unspoken bitterness make Onibaba a sultry and physical delight. 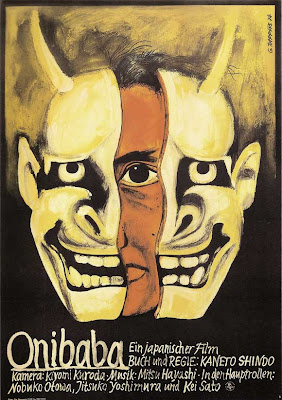 The film completely eschews the supernatural until the end. The older woman punishes the younger with a demon mask she took from a samurai she tricked into the hole. The hole itself I should say is a highly symbolic device. A scene in which Hachi stares deep into its unfathomable depths and cries out “I need a woman” needs no further elucidation from me. But the old woman makes a fatal error in utilising the doctrines and myths of Buddhism in order to salve her jealousy. The moralistic twist ending punishes her for this and indicates that Shindô’s sympathies lie with the young woman who is free to explore her sexuality. Onibaba is a claustrophobic tale of entrapment, poverty, and the raw heat of sexuality. It presents a land enclosed within high reeds and swollen rivers, grasses that sway lethargically in the stifling heat, imprisoning people in their oppressive and secretive world.
© Shaun Anderson 2011
Posted by Shaun Anderson [The Celluloid Highway] at 17:09