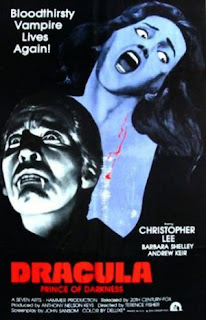 
Dracula: Prince of Darkness was Hammer’s third Dracula film and the second to feature the sartorial talents of Christopher Lee in the lead role. Because of Lee’s reluctance to become too firmly associated with the role of Count Dracula Hammer had to wait eight years before Lee was willing to accommodate a repeat performance. Unfortunately it wasn’t worth the wait, though the public at the time embraced the film and made it a commercial success. Lee was united with other key personnel from the 1958 production; Jimmy Sangster provided a screenplay based on an Anthony Hinds story, stalwart gothic horror director Terence Fisher was on hand to bring the film to visual life, James Bernard provided another memorable score, and Bernard Robinson endowed the film with his customary lavish production design. However the absence of Peter Cushing as Dracula’s nemesis Dr. Van Helsing leaves a void in the proceedings that Andrew Keir’s savant Father Sandor is unable to fill. Keir does a professional job, but his brusque and boorish manner lacks the air of intellectual dignity and physical vulnerability of Cushing’s more subtle and nuanced character.

The film opens by replaying the final moments of the 1958 film, a bravura action sequence that emphasised the physicality of Hammer’s interpretation. Here we do get to see Cushing and Lee clash, but instead of setting out a stall for Prince of Darkness, it just serves to remind us how much better the original was. The film that follows is extremely slow moving and laborious. We are introduced to two holidaying couples; Helen and Alan Kent (Barbara Shelley and Charles Tingwell) and Charles and Diana Kent (Francis Matthews and Suzan Farmer) they have chosen the tourist hot spot of Transylvania to unwind in and express a particular interest in Carlstadt. Despite the predictable dissuasion from superstitious locals the English tourists find themselves inevitability drawn to the imposing edifice of Castle Dracula. The couples couldn’t be more different. Helen is repressed, shrewish, a killjoy, something of a hag in all honesty. Her husband Alan patient and long suffering. Charles and Diane by contrast are adventurous, sexually active, and a lot more fun. They represent the two sides of a Victorian value system and Sangster’s screenplay spends the film punishing them. 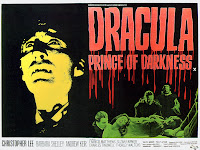 One major weakness of the film is the length of time it takes Dracula too appear. The film is halfway through before Dracula’s servant Klove (Phillip Latham) has strung Alan up and slit his throat. Alan bleeds like a stuck pig in one of the most surprisingly graphic moments in Hammer’s canon. In fact the film is really only notable for its set pieces; the resurrection scene, the staking of Helen, and Dracula’s icy fate. In between these moments very little of note actually happens. It is not surprising that Helen and Alan become the victims of Dracula. Helen’s transformation into a vampire is necessary for the films subtext about Victorian repression. Her inhibitions vanish once Dracula has sucked her blood, and she uses her sexuality in an attempt to lure Charles to his doom. In a way Dracula has set Helen free, but the fate of poor old boring Alan seems unnecessarily harsh. Helen’s demise is perhaps one of the more controversial moments in the Hammer canon. Helen’s thrashing body is manhandled by the religious patriarchs of the monastery, and they administer her destruction in a ruthlessly masculine manner. Despite the retrograde nature of this scene it is a moment of horrific distinction that matches Dracula’s bloody resurrection.

Although Dracula has no lines of dialogue, Christopher Lee’s brooding physicality still dominates proceedings. His lack of dialogue has become a matter of debate, but I for one don’t think it matters at all. Lee’s representation of this mythical figure was always communicated through his physical performance, though the decision to make him more animalistic here is a perhaps a step too far. The scenes in which Dracula hisses and snarls robs the character of his aristocratic dignity. Dracula is however ably supported by the graven image of Klove, and by the fly eating antics of Ludwig (a typically eccentric Thorley Walters) two of Dracula’s better disciples. The film overflows with a saturated gothic ambience, and the two principle locations of the castle and the monastery are effectively conveyed. Dracula’s destruction is a novel one and makes for a very distinctive conclusion. But Dracula: Prince of Darkness is unable to save itself from a protracted and sluggish opening forty minutes that robs the film of the pace and economy of the 1958 film it was attempting to emulate.
© Shaun Anderson 2011
Posted by Shaun Anderson [The Celluloid Highway] at 18:53