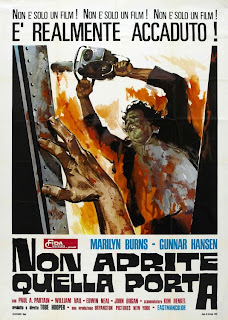 
The Texas Chainsaw Massacre is a ferociously effective film with a power to disturb that remains undiluted after thirty six years circulating in the social consciousness of humanity. It is tempting to view the film as an exceptional and isolated event, certainly there is no other American horror film of the 1970’s to match its all pervasive atmosphere of charnel house terror. However, in retrospect Chainsaw was clearly a part of a strain of American cinema in the 1970’s that explored the dichotomy between the urbanity of city or suburban life and the simpler climes of the countryside. These clashes between modernity and rural existence were witnessed in varying degrees of success in Deliverance (1972), The Last House on the Left (1972), Badlands (1973), and one of my personal favourites Race with the Devil (1975). In his book Nightmare Movies Kim Newman terms these films ‘Rural horrors’, and their rich thematic territory explores issues of environment and ecology, the nightmarish inversion of American landscape and pioneer spirit, alienated and disenfranchised populations, and the sour decaying underbelly of ’American dream’ capitalist endeavour. They are also united by a belief in the backwardness of rural communities, with intimations of in breeding and aberrant behaviour or rituals adding a layer of hysteria to the horror. Of all of these films perhaps it is Chainsaw which succeeds best in creating the requisite tone and atmosphere to match these thematic concerns, and quite rightly emerged as one of the most radical horror films ever produced in America. 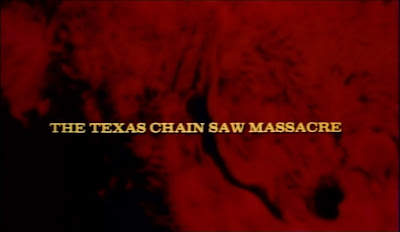 Those horror films that persist, achieve cult followings, and generally get under the skin of self appointed moral guardians or censor boards do so because they are radical in nature. The majority of horror films are conservative - they may possess elements of radicalism (the monster, serial killer, or supernatural force for example), but these forces of social or political unrest are usually contained and the status quo maintained. The radicalised horror filmmakers of the 1970’s had no choice but to work independently, a film like The Exorcist (1973) used blasphemy, graphic violence, bad language, and public hysteria to sell a repugnantly conservative message, Chainsaw has no need to resort to the carnivalesque because it deals in radical subtext. The only misstep is the title of the film, and I’m fairly sure that much of its reputation and much of the ammunition fired at it by the right is down to this unnecessarily lurid moniker. The main institutions of social control that Hooper’s film attacks are patriarchy and capitalism. Whether by accident or design screenwriters Hooper and Kim Henkel created a leftist critique, and one which stops at nothing to get a point across. The attack on patriarchy is channelled through another sacred institution; the family. By making the cannibalistic family at the centre of the narrative wholly recognisable, the horror comes from the revulsion that is generated by our own recognition of the petty squabbles and power struggles that exist in any familial unit. This is a family without a strong matriarchal presence (aside from the grotesque occasions when the retarded Leatherface powders his mask of human skin, applies makeup and wears an ill fitting apron!) and without this guiding hand it all goes to shit. 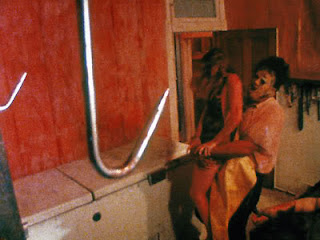 The failure of capitalism lies within a family who have been left behind by modern industralisation. The principles of Fordism and mass production means there is no longer a need for men to slaughter the cattle. The family have no option but to resort to extreme methods in order to assure their own survival in a harsh and unforgiving world in which the dollar is king. Capitalism cannot flourish without a culture of consumerism, Hooper and Henkel merely dramatise the most extreme and terrifying logical end of consumerim, by having a family survive by selling on the charred flesh of their victims as barbecue! This series of events follow a causal link and offer a vision of aspects of American culture simply forgotten about or left behind. At the time this film came out the American government were probably still more concerned with the people’s of Indochina than those in rural parts of Texas. Hooper and his colleagues also challenge prevailing preconceptions about the counterculture. Although Hooper’s consumerist metaphor is lifted completely from George A. Romero’s Night of the Living Dead (1968), Hooper never sentimentalises the counter-culture like Romero had want to do. Our hippy heroes in Chainsaw are bored, petty, and spend most of their time bickering. They have too much time and money on their hands. They are no less repulsive than the family of misfits, but are unable to save themselves because of the flabby middle class existence that has destroyed their survival instincts. 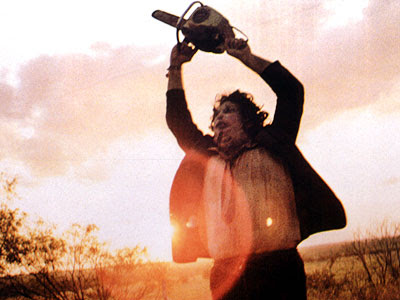 The tone and atmosphere of the piece is given much resonance by an astonishing production design which really gives a sense of grungy reality. The heat and the stench almost seeps through the screen. This is also a literate film aware of past traditions - the house functions like the castle of a gothic novel, becoming both a metaphoric and symbolic space, and one in which the links to serial killer Ed Gein can be fully realised. An opening scene of grave robbing adds another gothic layer, a layer that is horribly subverted by the grotesque image of the two corpses in a pose of copulation atop a tombstone. The ‘true story’ gimmick adds an apocryphal touch which in this case does add to the sense of reality. Never has a low budget been more of an asset, the filmmakers use such innocuous and cheap items as chicken feathers, birdcages, and of course a chainsaw to such memorable and symbolic effect. The title promised a gory bloodbath, but it is the subversive subtext of The Texas Chainsaw Massacre that makes it such a disturbing picture.
© Shaun Anderson 2010
Posted by Shaun Anderson [The Celluloid Highway] at 18:15