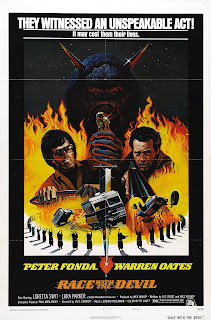 
Race with the Devil is a hugely enjoyable and interesting independent production which manages to conflate a number of the thematic preoccupations of 1970’s American cinema into its form. Firstly we have an exploration (albeit rather unsophisticated) of satanic cults. The most disturbing aspect of which is the lengths such sects will go too in order to maintain the anonymity of its members. This film appeared in cinemas before the commercial battering ram of The Omen (1976), and continued to prove that the devil had significant commercial draw in the 1970’s. The director Jack Starrett exploits Satan to the fullest, even though the horned beast fails to put in an appearance. The film also draws on a cinematic current which sought to find horrors within the alienated populations of rural America. These ‘rural horrors’ such as Deliverance (1972) and The Texas Chainsaw Massacre (1974) set the trend by having the feeble faces of urban modernity facing primeval fights for survival against fellow Americans forgotten and rejected by modernity. With its wide open landscape, empty and desolate roads, and lifeless towns Race with the Devil fits smoothly into this thematic terrain. The film is also a road movie, it venerates the automobile as a gadget for masculine expression, but challenges preconceptions of motor vehicles as a conduit of pioneer spirit. Our protagonists do discover something in the American outback, but it is something terrible and nightmarish. This is a film with generic hybridity, and by expanding the generic remit it is able to put its finger on a number of the ‘phobic pressure points’ that Stephen King so eloquently described in his work of non-fiction Danse Macabre (1981). 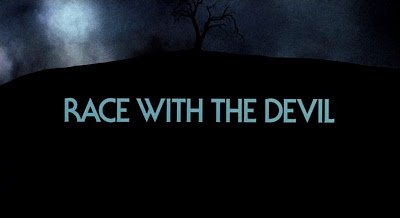 In the capable hands of Starrett and the writers Wes Bishop and Lee Frost the sublime landscape of rural Texas becomes a frightening space riddled with mistrust and paranoia. This is an inversion of the techno/political conspiracy films which were very popular at the time, the conspiracy here is created by people with a much simpler way of life, and a belief in the arcane rituals of black magic. The method in which they cover their tracks and extend their tentacles into all spheres of rural existence however gives them the omniscience of a governing force. It is this seeming omniscience, which extends to figures of trust and authority that generates the greatest horror. At the same time however this is also one of the films major weaknesses. It feels like an incredibly contrived plot device and at times stretches credibility to breaking point. The atmosphere of paranoia lends the film a certain post-Watergate resonance, but the film shies away from any overt political statement in favour of action and excellent stunt work. The city slickers are played by Warren Oates and Peter Fonda. They bring with them an iconic baggage of past exploits which Starrett uses to good effect. Both Oates and Fonda had experienced intimate cinematic encounters with the symbolism of the American landscape in search of the elusive ‘American Dream’. The outcome in both cases was tragedy and violent death. The social status of the two characters is a reflection of a certain counter cultural ‘sell out’ on the part of the actors. At this point they were no longer radical counter-cultural icons , but instead complacent representatives of suburban and middle class conformity. 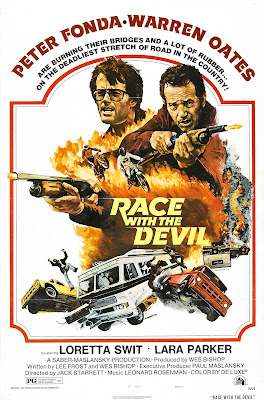 The film opens with much macho posturing from the two male leads, whole sequences exist simply to show Oates and Fonda competing. Their holiday to the Texan outback is really a means to show off a new expensive motor home, a bloated symbol of a success that has left them flabby and slow when facing danger. When they find themselves under attack though Frank and Roger switch with little effort into the role of killers. Its hard to know whether their anger derives from the violation of their shiny new motor home, or the terror of their screaming wives. The film overflows with blustering masculinity and testosterone filled action scenes, the women little more than screaming gnats gaping incredulously at each new event, before being reminded there is coffee to be made. They are an irritation and a distraction to the real business in hand; kicking some devil cult ass. 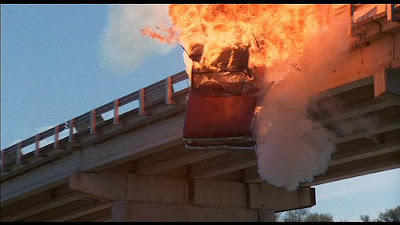 We are never allowed the opportunity to explore the motivations of the Satanic cult, they exist very much at the periphery of the action. A briefly glimpsed band of bearded hippies who lurk in the shadows until the final moments of the film. The screenplay resolutely avoids any supernatural trappings, and likewise refuses to moralise on the beliefs of the cult members; they exist and they want to kill the odious city folk who have unwittingly been witness to a blood sacrifice, that’s is all there is too it. Starrett saves everything up for a superbly orchestrated climactic chase sequence as our protagonists head desperately for the state border. This is a finale worth waiting for, though the final twist is rather predictable and downbeat in a typically 70’s manner. There are a lot of interesting ideas in Race with the Devil, but they never totally coalesce into a satisfying whole. There are too many thematic avenues, and a multiplicity of generic signifiers, and it creates an imbalance which this low budget picture fails to redress. The ambitiousness of the filmmakers however is to be saluted…which ever way you dress it up Race with the Devil is tremendous fun.
© Shaun Anderson 2010
Posted by Shaun Anderson [The Celluloid Highway] at 15:35