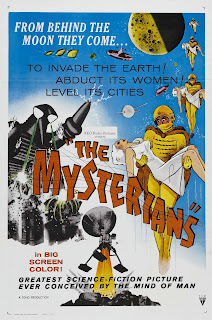 Released originally in Japan under the title Chikyû Bôeigun in 1957, Ishirô Honda’s second major foray into science fiction after the success of Gojira (1954) was picked up for distribution in the United States by MGM and released in 1959 under the title The Mysterians. No doubt the abominated bastardisation that Gojira experienced when released under the title Godzilla, King of Monsters! (1956) prompted US distributors to keep a keen eye on the development of Japanese science-fiction/monster movies, even if ham fisted dubbing and subtitle translation reduced the enjoyment and power of the films. The Mysterians was particularly fitting for US distribution because it is an invasion narrative, and it fed nicely into the fears and anxieties of the day. If Gojira borrowed numerous plot elements from King Kong (1933), then the major influence on The Mysterians is War of the Worlds (1953). What is most distinctive now is the wonderfully expansive use of Tohoscope, which gives the film an epic grandeur, some impressive model work, and the rich colour cinematography of Hajime Koizumi. The combination of these stylistic elements gives the film a look that would be repeated for many years in numerous Japanese monster movies. In this respect The Mysterians holds a significant position in the influence of Japanese science-fiction, a position that is somewhat underappreciated in the west.

The film opens with the violent disruption of a traditional Japanese celebration courtesy of a forest fire. This is indicative of a culture whose relationship to historical tradition has been violently halted, and from this point onwards the film rigorously explores technological and political modernity. The destruction of a rural village situated in the awesome shadow of Mount Fuji as a result of a land slide is further evidence to suggest that the attack in this film is on a rural and traditional way of life. These opening moments showcase some of the best special effects of the 1950’s, and also offer a sobering environmental message which was commonplace in much Japanese sci-fi of the 1950’s and 60’s. This rural clime is invaded by two bands of outsiders. The first are alien invaders from the planet Mysteria, the second are the forces of modernity; representatives of the military and scientific instiutions. The Mysterians unleash a giant mechanised robot which causes some minor chaos as an illustration of their technological power, but after this show of egotism their intentions are to travel the pathway of peace and diplomacy. The Mysterians are the only side that mention peace, their demand for women in order to replenish their decimated civilisation is such an affront to the Japanese authorities that they declare war.

The Mysterians themselves are colourfully attired, radiation scarred survivors, of a civilisation that was all but wiped itself out in a atomic war. They are a text book deterrent to the application of science in service of warfare. The film follows this line, a line that was prevalent throughout much sci-fi of the 1950’s, before performing a remarkable about turn which sees the military vanquish the outsiders with a special ray gun developed in secret by Japanese scientists. The Japanese authorities blithely disavow anything other than an aggressive military led strategy, and the power of the military emerges as the hero and saviour of the piece. The scientists led by Dr. Tanjiro Adachi (the ubiquitous Takashi Shimura) are alarmingly ineffectual. They don’t even offer a pacifist counter argument, but instead totally support the action taken. This means that The Mysterians is strangely bereft of a moral core, a position that when allied with its attitude to science and warfare is quite troubling. This is a notable shift from Gojira which Honda directed three years before. Gojira was a cautionary tale about the misuses of atomic power, which nevertheless fell back on scientific ingenuity for its resolution. The attitude in The Mysterians is confused and contradictory, instead of learning lessons from the fate that befell the alien interlopers we get a celebration of that same technology.

In other ways The Mysterians shows itself to be progressive and liberal. This is one of the few sci-fi films of the 50’s that goes beyond the borders of a country. By establishing an Earth Summit meeting in Tokyo, the Japanese authorities bring together the most influential governments of the world - this includes the USA and the Soviet Union, who appear to work in harmony for the good of the planet. The retrograde culture of paranoia and covert surveillance which marked the Cold War is totally absent from the film, ignored in favour of a culture of consensus, negotiation and co-operation. There is an easy temptation to read the alien invaders as a metaphor for America. The Mysterians are after all an aggressive and external threat demanding a tract of land for undisclosed military purposes. if this was in fact the intention then it adds a layer of subversion to the already mixed messages about atomic warfare, military aggression and liberal geo-politics. Most important of all though The Mysterians is a very good entertainment. We have images of UFO’s, space stations, alien abduction, giant robots, melted tanks and more explosions than is strictly necessary. Early experimentations with digital effects do not pay off, but the model work is never less than excellent. There is a certain naivety to The Mysterians which gives it a sense of fun and enthusiasm lacking in more serious minded science fiction.
© Shaun Anderson 2010
Posted by Shaun Anderson [The Celluloid Highway] at 16:31