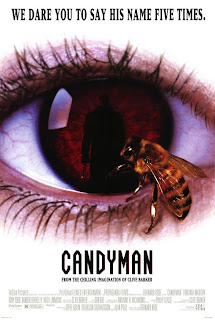 
The previous incarnation of The Celluloid Highway was a Facebook group entitled The Never-Ending Encylopaedia of Horror, Science Fiction and Cult Cinema. At its peak the group attracted close to 700 members, but I was never satisfied at Facebook as a platform for inflicting my ramblings on the world. The most controversial moment came when I published a review for the 1992 Polygram production of Clive Barker’s Candyman. I was accused of racism (totally unjustified), anti-Americanism (some justification) and even received a death threat! - I kid you not. For all my American readers out there I should point out that my Anti-American stance existed for precisely the same amount of time George Bush Jr was in office. The very small incident of hysteria that my review generated reminded me of some of the things I’d read during my researches of the ‘Video Nasty’ scandal which beset the UK in the early 1980’s. It’s amazing how some people read what they want to read, or see what they want to see, and seem to be oblivious to the intentions or context of the cultural artefact. I apologise for this rare autobiographical detour, but the film Candyman will always hold a dear place in my heart; how can I not love the film after receiving a death threat over my review for it? 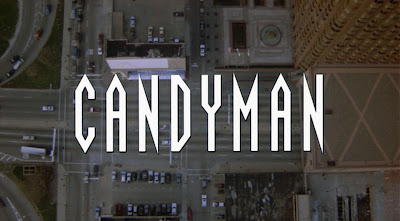 Despite emerging in a decade in which smart arse self-conscious post-modern horror dominated the multiplexes Candyman has gone on (despite a series of poor sequels) to confirm its status as one of the most important big budget American horror productions of the last twenty years. The other route horror took in the 1990’s was into the murky and rainy landscape of the psychological/police procedural thriller, and to its credit Candyman rejects both of these dominant styles. In style and temperament Candyman belongs to a prior era, it harkens back to the sophisticated socio/political scares of the 1970’s. It also gleefully celebrates its status as a proper horror film, and it possesses an enthusiasm and intelligence that was all to rare in the genre at the time. Perhaps because of these qualities a new icon of horror was born, a new entry in the chamber of horrors alongside (the increasingly irrelevant and silly) Michael Myers, Frederick Krueger, Pinhead, and the retarded Jason Vorhees. 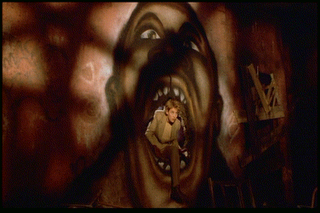 Pinhead is an important reference point here, because Candyman is the product of the fevered imagination of Englishman Clive Barker. The story, originally titled The Forbidden, and set in Barker’s home town of Liverpool, was published in 1985 as part of his short story masterwork The Books of Blood (1984-5). The story explored the importance of urban myths within a depressed working class area of Liverpool, but writer/director Bernard Rose transposed the narrative to Chicago for the film. The result is one of the few occassions when a change of location and country actually benefit’s the film. Rose was also English and had cut his teeth in the horror genre with the genuinely creepy psychological horror film Paperhouse (1988). However there is very little in this subtle and nuanced character based debut that hints at the occasional brilliance seen in Candyman.

The shift from Liverpool to Chicago enables Rose to make use of the historical baggage of America and the racial turbulence it was founded upon. The urban myth central to the narrative is born out of a brutal race crime. The film approaches the representation of African Americans (always a controversial topic) in a way that is radical for the horror genre. The Candyman is a character invested with intelligence and majesty, he has depth and detail, and his motivation lies in an eternal quest for love, which makes his acts of violent vengeance resonant and emotional. He is not the mindless juggernaut of so much 1980’s franchise horror. Tony Todd brings all these qualities to life in a towering performance which remains impressive with each subsequent view. On the strength of this performance the actor quite rightly became a staple of the genre, and a cult performer in his own right. 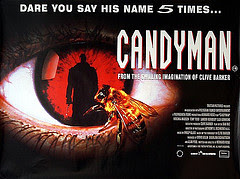 Rose and his collaborators make evocative use of the slum-like housing development where the film is largely set, and the screenplay is at pains to emphasise the class divide between the academics who conduct their well funded research within its environs, and the African-Americans who struggle to survive. Academia itself is depicted as an isolated world of pettiness and ego (and this reviewer can testify to the reality of that depiction) with Helen Lyle (a great performance from Virginia Madsen) using members of the ghetto populace to further her aims. Lyle herself is an unusual heroine for the horror genre - she is self-sufficient and emotionally strong, hypocritical and complex, but the actress brings dignity and pathos to a very unsympathetic role. The device of the urban myth would go on to have considerable commercial caché in the age of the post-modern horror film. But Candyman puts these immature efforts to shame, it stands out due to a genuine interest in characters and motivations, in moral dilemmas and the weight of history. It explores weighty and difficult themes such as race, class, and events in the past which some may prefer to remain hidden. This is all very good, but does it actually work as a horror film? the answer is a resounding yes. The set pieces are imaginative and beautifully orchestrated and brought chillingly to life by an excellent score by avant-garde composer Phillip Glass. So when you are next piqued with vanity and find yourself staring at your reflection in a mirror, think twice before uttering the word ‘Candyman’!
© Shaun Anderson 2010
Posted by Shaun Anderson [The Celluloid Highway] at 17:04