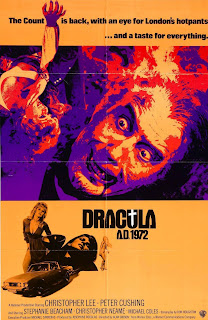 
Hammer’s seventh outing for Count Dracula is a curious entry which is never able to transcend embarrassment. By this point Hammer were literally and figuratively flogging a corpse, and their gothic horror films were tired, anachronistic, and only fleetingly lightened by lesbianism and nudity. Hammer’s horror films needed a new direction and after the surprise success of Count Yorga - Vampire (1970), which transplanted its vampire aristocrat into a modern setting Hammer clearly thought they had the answer. Much of the success of Count Yorga, Blacula (1972) and The Night Stalker (1972) rested on the manner in which the bloodsucker actually interacted with his surroundings. How Count Yorga (Robert Quarry) is able to manipulate the rationality and logic of modernity in order to cover his tracks is part of the films self-conscious appeal. He has integrated himself so successfully in modern society because of such things as cinema and literature, and the strong association between his kind and the world of fiction. This is a layer of meaning which Don Houghton’s screenplay for Dracula AD 1972 completely, and in my view catastrophically, omits. Instead when Dracula is resurrected in a black mass ceremony (almost a complete replay of a similar sequence in Taste the Blood of Dracula [1970]) he is not allowed to interact in any way with the modern world. He spends the film (when we are allowed an all to rare glimpse of him) stuck in an abandoned and deconsecrated church. This is a location that aesthetically at least could have worked in any of Hammer’s Victorian set Dracula films, so the inevitable question arises; what on the earth was the point? 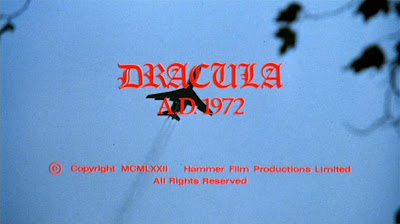 Disappointment in AD 1972 is further compounded by the filmmakers utter failure to follow up on an excellent prologue. This sequence set in 1872 sees Dracula and Van Helsing battling it out atop an out of control carriage hurtling through Hyde Park. The jarring cut from a gothic funeral procession for the late Van Helsing to the world of 1972 is signalled by a montage showing a screeching aeroplane coming in to land, a motorway, and a number of derelict buildings. The depiction of the modern world here is unflattering, a drab aesthetic wasteland that does not compare to the gothic locations of the past. The only location shot with a sense of visual style is the deconsecrated church, the only location that signifies a gothic past. Is there a hint of lamentation here on the part of the filmmakers? Certainly the film maintains a negative attitude to the London of 1972, but this may be as much down to Houghton’s old fashioned attitude to permissiveness than any wider sense of Hammer forlornly looking to a past they cannot recuperate. This failure to address modern youth extends to some of the worst dialogue ever spoken in a film, as Houghton creates a farcical world in which the height of anarchy is the occasional spliff in a Kensington coffee bar and the gate crashing of upper class parties. 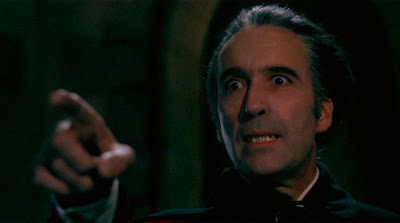 This extended scene which sees the band Stoneground get to sing not one, but two songs, in their entirety, is almost unbelievable in its silliness. It is also hilarious because it illustrates with painful lucidity the attempts of middle aged, middle class men to visualise what they consider to be the youth of the day. In other words hippy rejects from a London scene that had resolutely stopped swinging for several years, if indeed, it had truly ever swung in the first place. This is the most horrifying aspect of AD 1972, its creation of a rarefied closeted world that had never really existed in the first place, but one informed by the condescending attitude of a previous generation to which Houghton belonged. The efforts of Stephanie Beacham, Michael Kitchen and Caroline Munro et al, go beyond laughable and into the realm where you’d gladly take a chainsaw to each one of them; an experience they would probably acclaim as being “wild”. 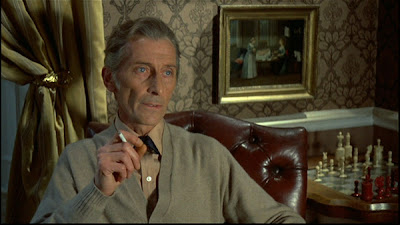 The main villain of the piece is in actual fact Johnny Alucard (Christopher Neame) who switches with aplomb from dandyish hippy to the disciple of Dracula. The character enjoys many of the best scenes in the film, not least of which is the fight he has with Lorimer Van Helsing (Peter Cushing), a novel finale sees him unable too escape from the running waters of a shower. This is a film that seems very concerned with the question of familial descent. Whereas Van Helsing struggles to adapt to the modern world because of his dedication to the academic line he has followed, Alucard adapts perfectly because his connection to Dracula means he can enjoy the full fruits of the permissive era. Dracula himself is more of an afterthought, but unlike Taste the Blood of Dracula where his appearances play second fiddle to an excellent statement about Victorian and patriarchal hypocrisy, here he simply has nothing to do. His purpose is to destroy the Van Helsing line, a petty motive hardly in keeping with the one who “commanded nations”, and fairly hard to achieve stuck in a church that is about to be demolished. One gets the impression he hasn’t thought this thing through. This doesn’t matter though, because Houghton’s screenplay is on hand to provide all the contrivance you need to get Dracula and Van Helsing in the same space for a disappointing finale. 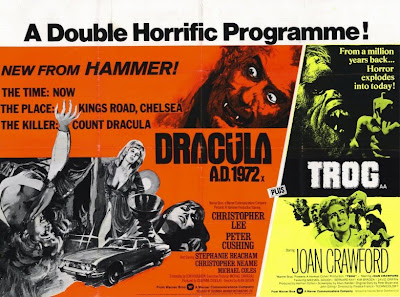 That is some double bill!
﻿

AD 1972 is further hampered by an hilariously inappropriate score by Mike Vickers. The music is in fact very good, and is an enjoyable listen in isolation, but a bizarre travesty when married to the images. The Canadian Alan Gibson who had the unenviable task of trying to direct this actually does well despite the material. He was making his second film for Hammer after the passable Crescendo (1969) and would follow this with the sequel The Satanic Rites of Dracula (1973), which is a much better film, despite the reputation it has attained over the years. All of the above elements have however contrived to make AD 1972 something of a cult film, and in certain quarters its reputation has been revised and rejuvenated. The main defence would seem to be that amid all of the shortcomings the film is essentially a lot of fun, a position I would totally agree with.
© Shaun Anderson 2010
Posted by Shaun Anderson [The Celluloid Highway] at 15:23