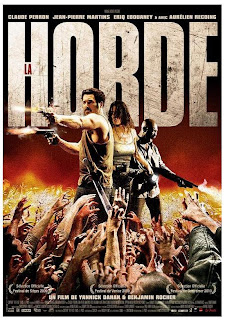 
French horror cinema is enjoying a period of unparalleled creative success, and it comes as no surprise to me that this coincides with a period of civil unrest in the country. Issues such as the economy, pensions, the retirement age, and immigration have seen citizens take to the streets in protest. There is a noble tradition of striking in France, a tradition that seems in large part to have the sympathy of the population (an attitude which is quite different in the UK for example) and this melting pot of political upheaval and uncertainty surfaces quite notably in the latest gore soaked French horror film The Horde. The Horde follows in the footsteps of Switchblade Romance (2004), Frontier(s) (2007), Inside (2007) and Martyrs (2008) in its unflinching portrayal of blood and guts and while it lacks the subtlety and intelligence of Them (2006 - for my money the most accomplished French horror film of this recent new wave) it makes up for this with its political overtones. Several of these major French horror films are ‘home invasion’ narratives, they offer a bourgeois vision of bland suburbia which is then shattered by the return of past events. The Horde situates its action in a rotting apartment block in Northern Paris, flipping the convention of middle class point of view to the perspective of rogue cops, violent gangsters, and the disenfranchised working class. 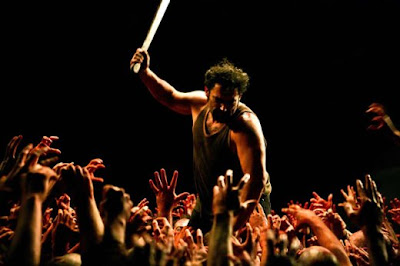 The Horde is also a zombie film, and the writers Arnaud Bordas, Yannick Dahan, Stéphane Moïssakis, and Benjamin Rocher are clearly conversant with the conventions of the form. For example they offer no explanation for the zombie masses, they just appear out of nowhere and wreak gory havoc. In line with recent zombie films these are swift moving creatures, and are a very persistent threat. In one slight twist of the form though, the central characters are desperate to escape the building they find themselves within. In most zombie films the characters are seeking a safe haven to lie low in, but the run down tenement with its drug lords and immigrants becomes an ally of the zombie masses who function as a cannibalistic return of the repressed. The building becomes a character in its own right. It is suitably labyrinthine; with winding and faded staircases, dilapidated and tired corridors, bland and lifeless rooms, and a dank decaying basement. This is already a hell in concrete form before the meat eaters arrive on the scene. This is a very accomplished spatial metaphor and much of The Horde’s thematic substance can be deduced simply by examining the role this space plays in the proceedings. 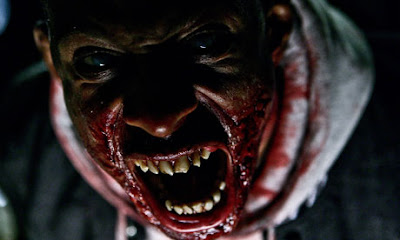 Tension is developed by having a group of rogue vigilante cops forced to cooperate with the criminal gang they have come there too eliminate. The screenplay is somewhat murky about this, and it is largely forgotten when the zombies turn up. The two groups are representative of the family unit, and its notable that both ‘families’ are dysfunctional and beset with in fighting. The more interesting is the criminals, who are led by an enigmatic and charismatic Nigerian. He alludes on more than one occasion to past events he and his brother escaped from in their native land, but its clear that as in immigrant he and his brother are also part of the horde. Because of this neither are allowed to survive the film. A racist veteran of the Indochina war turns up halfway through, a deviant of the older generation whose casual racism distils much of the anxiety being communicated. In one key scene we see the zombies pressing their faces to a door, and the camera again and again picks out Asian faces. Another key shot is of a Parisian skyline glowing with the fires of chaos - an imagine redolent of protest and rioting. This is a reading that is impossible to mistake, and the writers should be acknowledge for an impressive allegory. The film however is ambiguous in its beliefs.

That’s all well and good, but The Horde is also a barnstorming action/horror movie. Its shift in tone and tenor from a gangster movie into the realm of out and out horror is handled extremely well, and the action sequences never falter in their commitment to excitement and bloody violence. This is an extremely impressive debut from directors Yannick Dahan and Benjamin Rocher and shows a promise that could extend far beyond the remit of the horror genre. It seems that once again European horror is pushing boundaries that American product can only dream of. A comparison between this and George A. Romero’s latest forgettable drudge Survival of the Dead (2009) will tell you all you need to know about (a) Romero’s deterioration and (b) the handling of the material by European filmmakers with a tenth of the resources. For those who think only Romero can make political statements The Horde also has a highly developed and admirable socio/political dimension and uses the zombie motif in an conceptually interesting manner. One of the better horror films of the last twelve months.
© Shaun Anderson 2010
Posted by Shaun Anderson [The Celluloid Highway] at 14:59