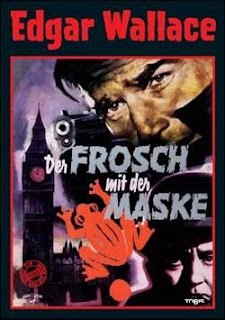 AKA:
Der Frosch mit der Maske
Face of the Frog


I’ve felt for quite some time certain dissatisfaction with the amount of column inches afforded to the Edgar Wallace krimi cycle within cult circles. This particular series of films has become one of the major losers in discussions of cult film. It becomes all the more surprising when one considers its close proximity to the Italian giallo. Whilst popular Italian cycles have enjoyed fetishistic attention (I myself am a party to this) others have been bizarrely written out of history. Of course part of the problem lies in the area of distribution, but of the forty titles that make up the Rialto produced Edgar Wallace series (the so called ‘official’ cycle), all have enjoyed legitimate DVD releases. When one goes beyond the Rialto films, one discovers a number of cash-ins based on the work of his son Bryan Edgar Wallace, and numerous films that weren’t based on either Wallace, but instead imitated the conventions of the Rialto films. These titles are much harder to track down, but then what else is a film scholar supposed to do? It’s important to remember that the term krimi in German simply refers to any film featuring elements of crime, murder, and detection; therefore the Wallace films do not have ownership of it. But what they do have is a style and mood all of their own, and hopefully over the coming months we can explore it together. 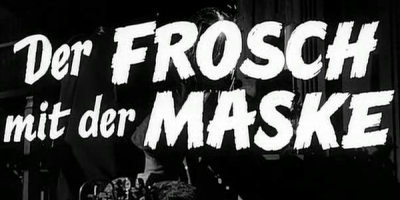 Fellowship of the Frog (try coming up with a better title than that!) was the first of the Rialto/Wallace krimi’s and in all honesty it’s a rather underwhelming affair. Rialto were a Danish production company, and the majority of the exteriors were shot in Copenhagen; an interesting decision for a narrative that is entirely set in London! Obviously the low budget excluded extensive location shooting, and instead London is evoked by stock footage which is clumsily edited into the movie. Nevertheless an opening sequence set in an aristocratic stately home manages to convey a certain refined gothic sensibility. This pre-credits scene setter also introduces the audience to the enigmatic criminal mastermind simply known as The Frog. With his distinctive frog-eyed mask, booming and commanding vocal tones, and stylish manner, The Frog makes quite an impression. Less impressive are the succession of incompetent uncultured goons that populate his secret society. Clearly The Frog is a man of supreme confidence; each member of the fraternal fellowship must undergo an initiation ceremony that involves having a frog logo branded onto their wrists…so much for secrecy! Despite such stupidity The Frog and his crew really have Scotland Yard and investigating officer Inspector Hedge (Siegfried Lowitz) in a state of panic. 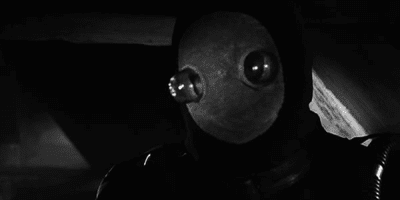 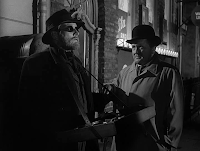 Sadly one of the major failings of Fellowship of the Frog is that for a film with such a slight running time it has far too many supporting characters and subplots. In addition too the Scotland Yard investigation we also have an amateur investigation from gentleman sleuth Richard Gordon (Joachim Fuchsberger) who is ably assisted by his well spoken butler (Eddi Aren’t). Muddying the waters even further are the Bennett family, all three members of the family are given subplots…the least successful of which features Ray (Walter Wilz) and his relationship with femme fatale Lolita, and how he becomes an unwitting stooge for The Frog. This plot strand fails because Wilz is unable to make Ray a sympathetic character. The Frog’s fascination with Ella (Elfie von Kalckreuth) is one of the more fanciful aspects of the plot; it just doesn’t ring true that a criminal mastermind such as this would risk everything because of an infantile schoolboy crush. But the most ill thought out plot point has to be the one that centres on the mythical character of Harry Lime. In addition to all these elements we also have sundry kidnappings, numerous murders, and numerous seductions. You’ll struggle to find a busier 87 minute movie anywhere. 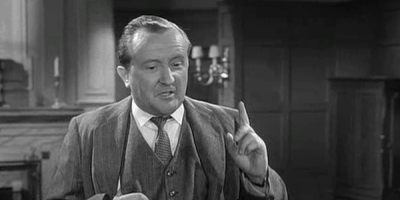 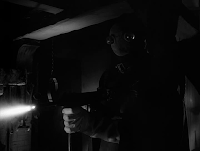 Ultimately the unwieldy and overpopulated screenplay from Egon Eis and J. Joachim Bartsch collapses under its own weight. The direction from Harald Reinl is serviceable and unobtrusive; rarely does the filmmaking do anything other than service the narrative. One area in which the film does excel is in its creation of a seedy night life replete with sleazy cabaret bars, desolate docklands, and hideouts fully of booby traps and trapdoors. The film definitely struggles to live up to the exaggerate brilliance of its outlandish villain, though The Frog’s opponents Inspector Hedge and Richard Gordon are equally charismatic. The Frog’s identity is of course a major device that propels the narrative forward, and the final revelation is one of the less obvious and pleasing aspects of the story. The historical significance of Fellowship of the Frog as the first of these films gives it a cache that it scarcely deserves. Later examples would be far more distinctive and imaginative, but the success of this film spearheaded a cycle that would encompass well over fifty films…not bad for a low budget Danish shot thriller intended for the West German/European market.
© Shaun Anderson 2012
Posted by Shaun Anderson [The Celluloid Highway] at 21:58