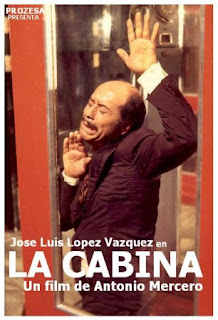 
The Telephone Box was a short film made for Spanish television in 1972. Its origins are humble, but its status as a cult film is incontestable. It is incredibly unusual for a short film, especially one from a director who is still largely unknown outside his native Spain, to acquire such a following. It would almost be impossible for it to happen now, but in the early 1970’s when short films were often screened as support features (quite often they were educational or public safety films) and on late night television, the chances were slightly improved. The majority of these films were seen once, left an indelible and haunting impression, and were then the subject of nostalgia, word-of-mouth, and ultimately a long (and often fruitless) quest for a second view or even ownership. The relative obscurity and unavailability of The Telephone Box has been of paramount importance in its development as a cult object. The significance of the film has grown in proportion to its descent into the gloomy netherworld of a distribution limbo. This isn’t entirely the only reason for its cult status however; one of the key signifiers of a cult film is generic hybridity, and The Telephone Box has this in abundance. The film opens as a kind of anarchic surreal comedy, before subtly shifting into a realm of puzzlement and mystery, and then concluding in outright horror. Three generic shifts in thirty-five minutes may seem unwieldy and problematic, but the filmmakers pull it of with such confidence, that the cumulative effect is quite devastating. 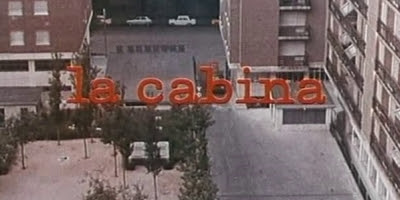 The film benefits tremendously from its simplistic premise and from it’s incredibly stripped down and minimalist plot. There is no room for manoeuvre here, no space for characterisation, and no sphere within which to explore motivation. There are no explanations, and no attempt to offer easy answers or platitudes. It’s the resolute denial of such things that makes The Telephone Box such a queasy and disquieting affair. The film opens with the construction of a bright red telephone box in a deserted square in a residential area of Madrid. The hustle and bustle of a busy weekday sees men and women journeying to work, kids rushing to make the school bus, we even see a pair of nuns traversing the balmy streets. The door of the box stands invitingly open, almost teasing an individual to enter its environs, and after seeing his son off to school, an unnamed name (José Luis López Vázquez) does just that, only for the door to slowly close and leave him trapped. The first realisation that something odd or untoward may be occurring is indicated by the fact that the phone never works. This event is treated very much as a situational comedy for the first half of the film as various members of the public attempt to free the unwitting man. The square fills up with spectators; old women relax in deckchairs as they watch the fun, children mock and tease the overheating man as he struggles to maintain his dignity. The police turn up but are unsuccessful; the fire brigade turn up and are met with the same result. As this farce continues so does the public’s appetite to watch it. There is no empathy, and very little pity, the man has provided distraction and entertainment. The filmmakers are clearly making a statement about social alienation and disaffection within the framework of a critique on modernity, and it’s extremely well articulated. 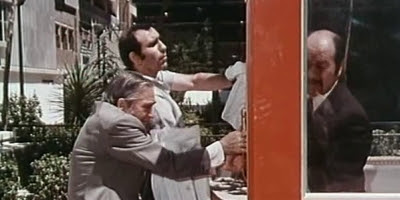 When the chaps from the telephone company come nobody questions them when they load the telephone box and its increasingly distressed occupant on the back of a truck. At this point the story subtly begins to shift its tenor as the truck winds its way through the busy roads of Madrid. We are given a tour around the featureless and bland architecture of the city, buildings tower like threatening sentinels, the motorway stretches endlessly into the horizon, cars soar past with no regard for the peculiar site aboard the truck. The man turns and is greeted with the troubling site of another man trapped in a telephone box, on his way to the same mysterious destination. Subtly and almost unnoticeable at first the environment begins to change and we find ourselves in an area of urban disintegration, of slum like dwellings and disrepair, a rural retreat that has been left behind by modernity. In an odd reversion of common practice the man is stared at by a troupe of circus performers, the episode made even more disturbing by the knowing looks of sympathy they cast toward him. 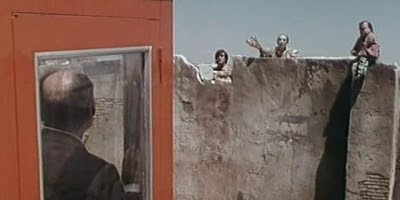 By using pre-existing locations the filmmakers create four distinct spatial spheres; from the bustling square at the heart of a suburban community, to the blandly implacable highways of the city, to the disenfranchised and poverty stricken slums, to the mountainous countryside that marks the final lap of the journey. All of these areas work symbolically and metaphorically, and they all express an anxiety about the modern world. The most effective symbol of course is the telephone box itself which implicates technology in the conspiracy. The finale will remain a mystery for those who haven’t had the pleasure of this film, and although it can be predicted, it still packs an almighty wallop thanks to the superb central performance of the lead actor. I’ve seen comparisons made between this and The Twilight Zone, but The Telephone Box does not have a twist ending simply because it totally eschews all explanations for the events. There is no clever deception here, like in the better writing of a Rod Serling or Roald Dahl, the terror lies in the sheer inexplicability of the events, and the writer’s unwillingness to offer even a cursory explanation for the horror that unfolds.