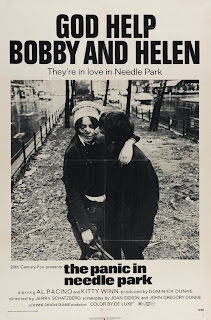 
In recent weeks I have found myself, by accident rather than design, walking the putrefying urban rot of New York City in a series of offbeat cinematic outings. The first from 1982 was Lucio Fulci’s abhorrent monstrosity The New York Ripper, the sort of film that has you reaching for the carbolic soap on the way to the shower after a screening. The second from 1980 was James Glickenhaus’ returning veteran/vigilante flick The Exterminator, although far more enjoyable than Fulci’s menagerie of mindless depravity, it was still grimy and grubby enough to leave one feeling soiled by its decaying atmosphere. I’d like nothing more than a holiday from this mucky milieu; even Summerisle seems an attractive option. But Summerisle, and their delicious apples will have to wait, instead we have The Panic in Needle Park, and it's time for me to don my waders once again to traverse the effluent of New York City. Of the three films mentioned in this paragraph Needle Park is certainly the most worthy. It is regarded in some quarters as an art film, though the sensationalism of 20th Century Fox’s promotional campaign, which luridly emphasised the exploitation elements, makes it a curious hybrid of art and exploitation film. In the US it was these protracted and unflinching multiple sequences of junkies shooting up that created both scandal and box office success, in the UK it resulted in the film being refused a certificate from the BBFC for four years.

Of more cultural significance is that The Panic in Needle Park marked the arrival onto centre stage for New York’s own Al Pacino. His performance as the fast talking street-wise junkie Bobby was a crucial baptism of fire which led to his casting in Francis Ford Coppola’s The Godfather (1972). Pacino shines with an unearthly energy, he is fast and fidgety, a pocket dynamo that cannot be contained, a character that is unable to stand still, he’s constantly on the move, flitting from one deal to the next, stealing this and that in order to fund his expensive addiction. The only time that Bobby can be seen in repose is when heroin courses through his veins, but even then he is susceptible to an overdose. It seems to me that the ambition of innocent and vulnerable Helen (Kitty Winn) is simply to get Bobby to slow down long enough so that she can steer him towards a life away from the urban nightmare of Needle Park. But in this ambition she will always be doomed to failure, and her attitude is if you can’t beat them, join them. Helen is the true mystery at the heart of the film; she is homeless, and penniless, and by all accounts it appears to be by choice. She mentions her home in Indiana, and writes a letter to her mother, but these are the only details we are allowed; a certain wistfulness appears in her eyes when she thinks of home, but we are left to conjecture on the events that transpired at home in order for her to flee into the murk and iniquity of the junkie underworld. 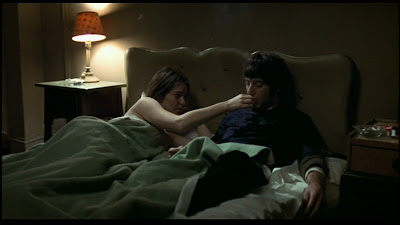 Although The Panic in Needle Park is a stark portrayal of addicts and their desperation it is at heart a love story. It is a very low key affair; the height of Bobby’s romanticism extends to the stealing of a television set in order to raise $25 for some food. Helen is looking to belong, and Bobby is looking for someone to own. But neither character is in control of their destiny; they are both enslaved to heroin. This in turn leads Helen to prostitution, a turn of events which Bobby only too easily adjusts too. Both individuals know their relationship hangs by a thread and betrayal lurks around every corner. Also lurking in the streets is the ever present spectre of law enforcement, a constant pressure working at the junkie’s insecurities, preying on their vulnerabilities and sewing a corrosive atmosphere of mistrust. Throughout the film Helen’s attachment to Bobby increasingly becomes dependence, prior to this I was willing Helen to leave him, but the moment she shoots up for the first time and joins the cadre of pasty faced malnourished junkies that hang out on a bench in Needle Park her fate is sealed. The protracted shots of needles entering veins in unflinching close up actually comes as something of a distraction. These moments seem to sit outside the narrative, go on for far too long, and are ultimately quite boring. The films ability to shock has been significantly reduced by the intervening years, but its ability to conjure up a repugnantly seedy atmosphere remains undiminished, and is best illustrated in a scene in which Bobby suffers the convulsions of an overdose. 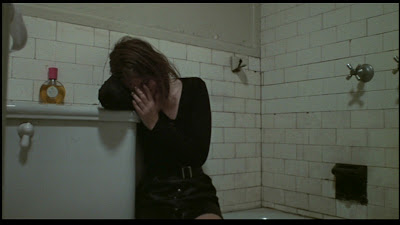 By and large the director Jerry Schatzberg maintains this sense of interiorised verisimilitude, the only misstep is an odd episode where Bobby and Helen visit the countryside, purchase a puppy, and in their desperation to shoot up on their way back to the mainland, momentarily forget the puppy, which falls overboard to a watery grave. A stupidly melodramatic moment which adds nothing to the proceedings, other than to tell us what we already know; these guys are desperate addicts and will stop at nothing for their next fix. Despite the bleak grittiness of the verité style visuals the director (who was also a fashion photographer) creates a strange intimate beauty. This is an aesthetic triumph, but it is the aesthetics of dirt and grime, of disuse and despair. The total lack of music makes it an emotional wasteland, there are no cues to prime our emotional response, and this goes a long way to achieving the films climate of uncertainty. The Panic in Needle Park may have once had a prominent place in discourses surrounding cinematic representations of naturalism and reality, it may once have been a scandalous exploration of drug addiction, but now it is chiefly remembered for being the film that introduced Al Pacino to the world.