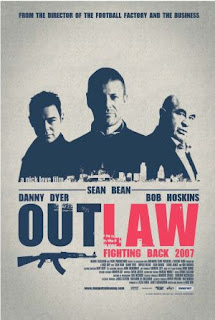 What is wrong with British Cinema? Nick Love, Outlaw and er... Danny Dyer.

For my sins, I’m somehow drawn to write on the rather horrible but somewhat fascinating Outlaw. This is for two reasons. Firstly, it sits well outside the remit of Videotape Swapshop. Secondly, in conversation with the author of this fine film site, I was asked how I managed to live (and work) in London. I began to think about the cinematic representation of life in England’s capital – all the more relevant, I guess, with the current overwhelming and ongoing public image exercise at hand in the city with this summer’s Olympic Games preparations. Once upon a time, we had Mike Leigh to paint the picture of life in England, and often of life in and around London. It usually involved familial disputes over mismatching tea cups and Hygena kitchen sinks, and usually, intentionally, stretched no further than the semi detached landscape of the suburbs. Then, from the steaming afterbirth of the artful (Madonna) dodger Guy Ritchie and his pop grot hooliganism, Lock Stock and Two Smoking Barrels (1998), emerged Nick Love.

Love followed the mandate for over stylised cockney gangsterism and very briefly set London in conflagration in very much the same way a carelessly discarded pie might have done one day in Pudding Lane. The rest, potentially, is a horrible history. If we sidestep the equally awful The Football Factory (2004) for a moment, we should skip straight to the “themes” at play in Outlaw. All shelter under an overarching umbrella of vigilantism. Outlaw’s central concern is to describe the extent to which ordinary, but disaffected, folk are pushed before taking the law into their own hands. There’s some clumsy commentary on class distinction, or rather a lack thereof. Most of the Outlaws are upwardly mobile, though disaffected nonetheless. There’s the soon to be married City Boy living in a fancifully sterile Canary Wharf area duplex apartment and the Barbour Jacket wearing, to the manor born, son of a former Major, who has been left hideously scarred following a brutal assault. There’s even (gasp!) a black barrister, driven around by a servile Bob Hoskins, whilst dealing with underworld scum. 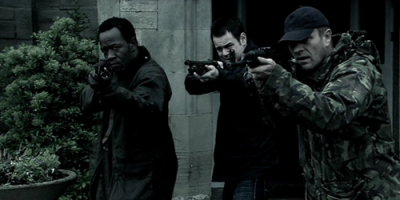 Tie-ing this unlikely gang of moral bandits together is Sean Bean, a (predictably) disaffected soldier returning back to grey-hued Blighty from service in Iraq, who is made to utter “it’s worse here than over there”. Bean is all too clearly unhinged, but his Daily Mail inspired rants of Britain letting “decent folk” down, shamelessly resonate with the rag tag ensemble and the resulting acts of violence against violence lead to another painfully telegraphed twist: the public begin to view them as grim anti-heroes. The desperate act of taking the law into one’s own hands is given a broad coating of dramatic nonsense that takes in a spot of police corruption, the Robin Hood myth and a liberal seasoning of the traditional Revenge mechanic. As the film develops, the moral viewpoint shifts from Bean’s perspective to that of Danny Dyer in the role of City Boy Gene. In what can only be assumed to be a hazy stab at social dilemma – specifically The Public Good Game, Dyer elects to leave his comfortable life behind and carve out a new career in roughing up the bad guys for an intended greater good. The ugly Conservative Liberalism in Love’s text is no accident. In both The Football Factory and the ill advised remake of Alan Clarke’s The Firm (1989), well to do young men elect to stray outside the borders of respectable British behaviour in pursuit of a very male and very romantic flirtation with savagery. Whilst this idea exists in Outlaw as a strange love story between Mad Bean, turmoiled Dyer and the equally anxious barrister Lennie James (call it a punch drunk ménage a trois if you will); it has become a recurring element in the director’s somewhat childish output to date. It is, however to the style of Nick Love’s filmmaking, that the most obvious criticism can be let in. Love’s films are technically adequate (increasingly so, as the budgets build up per production), but they offer nothing new to the British cinematic landscape. Love allows Sam McCurdy to fetishsise South and East London with hard and sharp photography and whilst the nimble fingered editing of Severance’s (2006) Stuart Gazzard may well lean on Mann’s Heat (1995) in the best case scenario, it quickly becomes tangled up in Love’s characteristic enthusiasm for noisy, coked up modes of representation - a convenient “get out” strategy deployed in Outlaw in the absence of any notable filmmaking bravura. 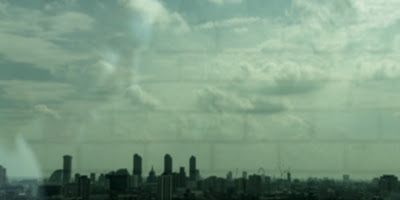 Love’s films are similarly obsessed with CCTV (or “smudgers”) and Outlaw takes this excitable interest to an excruciating new level. Bob Hoskins’ proximity to CCTV footage performs a redundant narrative function, but throughout Love’s career, the “smudger” has frequently played the part of awkward social commentary. Six films in, the conceit is already noticeably overcooked, will almost certainly figure in the impending re-imagining of The Sweeney and best indicates the director’s drought in cinematic innovation. Clearly, Nick Love is a TV License owner. Outlaw does that horribly hyper-real thing of piggy backing on BBC news reporting (how else are we to gauge the public response to the film’s events, after all?) to give it some anchor in reality, but which serves only to give the film a depressing, decidedly low rent feel. Though less patronizing than, say, the throwaway stylisation of Matthew Vaughan’s Layer Cake (2004), Outlaw’s outlook on life in London is still shockingly two dimensional and tailored to either an audience “ not of the island” or with little time or inclination for digestion. 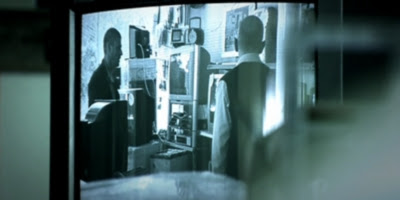 No discussion of Nick Love should go without his regular partner in crime – Dire Danny. The pair have held hands since Goodbye Charlie Bright (2001). I share some similarities with Dyer. We are of the same age, grew up in the same areas and are, to my distaste, physically similar. Thankfully there are some differences too. To date, I have not presented The Real Football Factory and to the best of my knowledge, I refrain from staring off at an angle, whilst pouting, when trying to convey that I am in thought. This “Dire” trait goes some way in explaining the actor’s deficiencies; one’s amplified in Outlaw’s attempt to deal with inner conflict. Whilst it would be easy to refer to Dyer’s acting as a source for “what’s wrong with Outlaw”, it’s more useful to comment on Love’s habit for indulging in self harm in his casting because, 6th Form Drama Assignment script aside, the director insists on using the non-actor in roles that embarrassingly outweigh his actual ability. 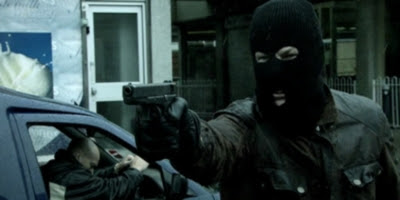 Now, to those who may cry Bob Hoskins in the film’s defense (if these people actually exist), I respond with The Long Good Friday (1980) which, discounting the nostalgic coo-ing, is an equally Made for TV-esque affair and criminally lacks in terms of its performances. That Bob Hoskins agreed to the project is both of no surprise (Super Mario Brothers, anyone?) and a horribly misguided sense of National Duty. To those who fly in to London this summer to watch sweaty men and women prance around the horribly, previously, neglected locale of Stratford in the miserable Borough of Newham, Outlaw remains a worrying postcard possibility. As the government suit up and ready themselves to intimidate anyone thinking of a repeat performance of last years riots, the geezer-ish potential for Love’s London to win out like a fixed Mayoral election remains a distinct possibility. Perhaps that is what I find most offensive after all.

Watch Outlaw, and move to Surrey!


Many thanks to Mike for contributing a second excellent guest review for The Celluloid Highway, and for a film that almost certainly would never have made it onto the site were it not for him. If you enjoyed reading this as much as I, then please head on over to Videotape Swapshop for more of the same.
Posted by Shaun Anderson [The Celluloid Highway] at 19:55