Hammer Film Productions' adaptation of the novel The Nanny by Evelyn Piper is one of the companies most stylish, intelligent, disturbing and thought provoking films. To audiences accustomed to the stylisation of the highly melodramatic gothic horrors for which Hammer were best known The Nanny might come as a surprise, but within the context of Hammer’s production at this time it is not an aberration at all. The first half of the 1960’s had seen a certain amount of diversification for the British company - offering audiences historical adventures (pirate narratives, oriental set dramas, and swordplay films) as well as the odd departure into science-fiction. But more prominent were a series of black and white psychological chillers which took their inspiration from Les Diaboliques (1955) and Psycho (1960). Unfortunately past examples such as Nightmare (1964) and Paranoiac (1963) had overemphasised the plot complexities and wrapped themselves in all kind of narrative knots. The visual elegance of the monochrome cinematography had always meant these films were pleasing on the eye - but Jimmy Sangster (who wrote most of them) struggled to rise above the shackles of derivation that was the result of following templates laid down by Robert Bloch, Alfred Hitchcock, Pierre Boileau and Thomas Narcejac. Only with Taste of Fear (1961) and The Nanny was Sangster able to make important contributions to this sub-genre. 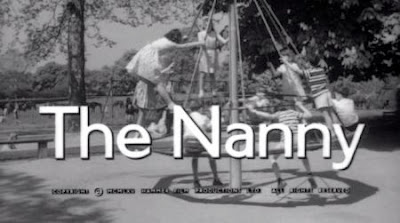 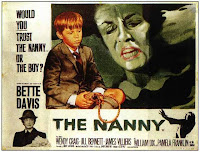 An incalculable amount of the resonance of The Nanny comes with the casting of the magnificent Bette Davis as the titular child minder whose clouded mind and repressed memories lead to tragedy. In the 1960’s Davis had reinvented herself with two keynote performances - the first of which was as the faded and psychologically damaged child star Baby Jane Hudson in Robert Aldrich’s wonderful Whatever Happened to Baby Jane? (1962) the second was a similar turn in another Aldrich thriller Hush…Hush, Sweet Charlotte (1964). Davis had a particular talent at this time for playing aged psychopaths with secretive pasts, a talent that Jimmy Sangster (who acts as producer as well as writer) and director Seth Holt exploited for The Nanny. The Nanny is a complex character (we never learn her real name), who has rejected her own daughter (in a flashback we discover her daughter dies from a botched abortion) in order to bring up other children. It is made implicit that this decision is also motivated by class. The household is very upper class with Bill Fane (James Villiers) often absent due to his role as a Queen’s messenger. The Nanny must contend with the antics of Joey (William Dix) whose antithesis toward her is due to the accidental drowning of his baby sister. And with Joey’s mother Virginia (Wendy Craig) a clingy and infantile woman totally dependant on her old Nanny and totally controlled by the men in her life. She is neurotic, weak, and has an implied alcohol dependency. This is a truly dysfunctional household, not helped by the tense battle of wits that develops between Joey (who is convinced his Nanny means to drown him) and The Nanny who convinces herself of the same. 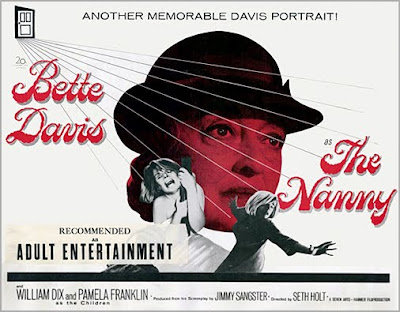 Much of the suspense is generated by the fact that we are not sure until the end whether the boy speaks the truth, and the performance of Davis and certain choices of composition and camera angle by Holt lead us to sympathise with The Nanny. Joey’s bad behaviour and mischievousness is purposefully heightened in order to lead us to side with The Nanny and this is one of many techniques used in the film to make us take sides. Both characters have flashbacks of the tragic afternoon in which the little girl drowns (the scenes involving Susy pull at the heartstrings and are oddly harrowing). And it becomes clear that the accidental death of Susy is a punishment for The Nanny’s own failure to live up to her parental responsibilities. What makes the film truly disturbing is the manner in which innocent trust is manipulated and abused by damaged adults. The Nanny has deluded herself with repressed guilt, and this eventually tortures her to the extent where she commits murder. But this is only possible in a household with a brusque and unapproachable father who is absent and a mother unfit for the job. The vision of an upper class family reliant and dependent on those they employ for the tasks beneath them (and that includes raising children) is bleak and unforgiving. This depressing message is brought to life by the vile and dirty backstreets where The Nanny’s daughter meets her premature death and in this flashback sequence is the key to the whole film. The themes of loss, guilt, repressed memories and trust are brought to life by beautiful cinematography courtesy of Harry Waxman and a delightful soundtrack by Richard Rodney Bennett. The single apartment setting makes for a claustrophobic and paranoid spatial scheme that is rendered in the most elegant of cinematic terms by Seth Holt. Without doubt one of Hammer’s most retrained, graceful, and clever films.
﻿© Shaun Anderson 2010
Posted by Shaun Anderson [The Celluloid Highway] at 16:06