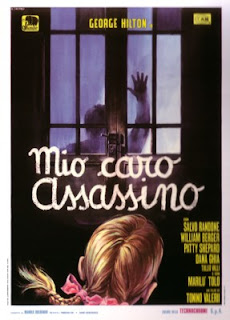 
This efficient and at times impressively staged gialli was directed by journeyman filmmaker Tonino Valerii. He spent much of the 1960’s working on spaghetti westerns performing the role of assistant director to Sergio Leone on A Fistful of Dollars (1964) and For a Few Dollars More (1964). Valerii also directed three of his own in this popular cycle before taking a change of the direction in the early 1970’s. This would be Valerii’s only attempt at a gialli and it would turn out to be both memorable and creatively successful. The film instantly benefits from the casting of George Hilton, who at the time, was an assured staple of popular Italian cinema. Hilton had previously appeared in the undistinguished gialli Next! (1971 aka The Strange Vice or Mrs. Wardh) and Case of the Scorpion’s Tale (1971) and brings with him the experience and gravitas required for the role of Inspector Luca Peretti.

This particular entry differs from the norm in the emphasis it places on the police investigation. This is a gialli refreshingly free of the alienated and lonely amateur sleuth. Unusually the police are depicted in a very positive light, instead of the interfering idiotic bunglers of previous examples. They are a very likeable bunch with a good sense of humour and camaraderie despite finding themselves embroiled in a complex murder case with disturbingly perverse undertones. They are led by the determined but flawed Peretti - he is a gifted master of deduction in the mould of Sherlock Holmes - but he is less than gifted when it comes to his own personal relationships. The film opens with one of the most audacious, and some might say absurd, pre-title sequence in which an unsuspecting fellow is decapitated with an industrial earth digger. This outstanding opening is underscored by a credits sequence featuring a beautiful nursery rhyme theme composed by the ubiquitous Ennio Morricone, offering the first indication of the centrality to the film of the themes of childhood and lost innocence. 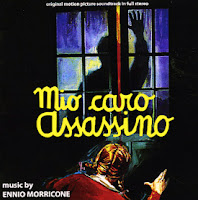 Unfortunately My Dear Killer fails to live up to this excellent opening. This can largely be attributed to the complexity of a plot that gets a little congested midway through. This is a criticism that is not new for gialli, but the convolution here raises the bar a few notches. The red herrings are dished up with metronomic regularity as an old murder case is reopened by the police. A plethora of suspects are trooped out in rapid fashion, and Peretti continually finds himself out manoeuvred by a resourceful and stylish killer. This stylishness includes the use of a buzz saw as a murder weapon in one the films key set pieces, and the later use of a marble statuette. Peretti soon finds himself drawn into a familiar world for enthusiasts of this type of film - a bourgeois culture of scheming crooks, blackmail and deceit and the return of a long repressed event for a wealthy family. The structure takes a turn for the worse with the introduction of a series of flashbacks offering us a particularly unsavoury red herring that hints at child abuse and paedophilia. 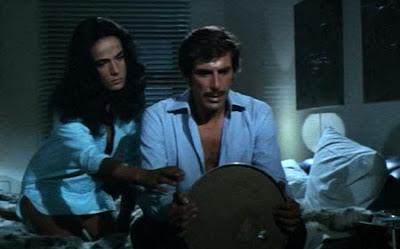 A plot device involving a drawing or piece of art is another that is very familiar to the form, and as in other examples, the children’s illustration in this film offers a conduit by which the investigator is able to make connections with past events. Any film dealing in strong themes surrounding children leaves a sour taste in the mouth, but My Dear Killer is generally able to approach them with tact and dignity. The final summing up at the end is a bit Scooby Doo and is redolent with the clichés of numerous Agatha Christie tales - I felt this film deserved a better conclusion. But overall this is an accomplished piece of genre filmmaking. It is stylishly shot by Manuel Rojas, with plenty of saturated daylight sequences and suitably spacious location work. Valerii makes consistent use of the POV shot, and is used very effectively in the set piece involving the buzz saw. It offers us the briefest glimpse into the shattered sanity of a killer. On the evidence here it is a shame that Valerii didn’t go on to direct more gialli, but nevertheless this single entry is ample evidence of his talents.
Posted by Shaun Anderson [The Celluloid Highway] at 18:39