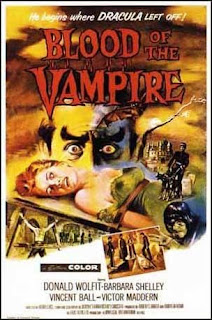 
Although totally obscure and almost completely forgotten to modern audiences Blood of the Vampire has the dubious honour of being the first major attempt to imitate the colourful gothic horror of Hammer. Released mere months after Hammer had scored a major success with Dracula (1958) the screenplay was written by Jimmy Sangster who had also penned Hammer’s early gothic successes. Where Sangster had shown himself to be adept in the skill of adaptation for the purposes of Hammer’s low budgets, his skills as an original writer are found wanting here. Sangster is on firmer ground when his screenplays call for derivation (the series of black and white psychological thrillers he wrote for Hammer in the 1960’s are a good example of this). Blood of the Vampire is derivation of the highest order - one of the worst types of cash ins - unfortunately the horror genre is most susceptible to this. Part of the reason why this can be rated as one of the worst imitations is a deceptive title and a deceptive pre-title sequence. 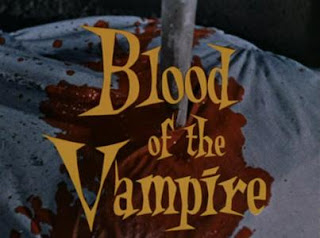 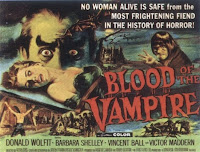 The setting is Carlstadt in 1874 and the film opens with an impressively morbid sequence in which a man suspected of being a vampire by a superstitious posse is unceremoniously staked through the heart. To show how tasteless this film is compared to Hammer the opening credits play over a freeze frame of this bodily trauma. From the perspective of blood and violence though the film generally pulls its punches and rarely again reaches the inspiration of this moment. The man of course isn’t a vampire, but is in fact Dr. Calistratus (Donald Wolfit), who is saved from death by a heart transplant and the efforts a disfigured hunchback assistant called Carl (Victor Maddern). The only problem is the cells in his blood want to destroy each other and as a result he has to endure regular blood transfusions in his bid to locate a cure. He does this by abusing his position as the head of a prison for the criminally insane and experimenting on the poor unfortunates in his care. After some illegal machinations and institutional corruption Calistratus sees to it that Dr. John Pierre (Vincent Ball) serves his prison term at the institution and is thus able to utilise his talents in the area of blood disorders. 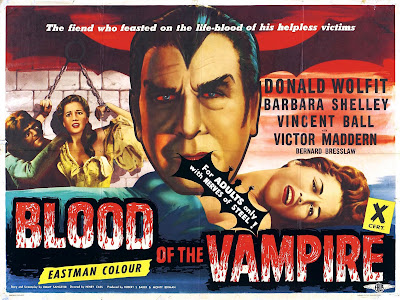 The prison is a particularly grim creation; grey corridors, whipping posts, snarling dogs, and sadistic guards delighting in the suffering they see all around them. The struggle of Pierre to adapt to this harsh and unforgiving environment is initially of interest, but the film spends far too much wasted time with this bland protagonist and his efforts to escape the clutches of Calistratus. When Pierre discovers the nature of the Doctor’s experiments in a secret basement laboratory the echoes of Nazi concentration camps reach a pinnacle. It is this particular layer of meaning that makes Blood of the Vampire such a tasteless and tactless exercise. A year later Georges Franju would explore similar themes in Eyes Without a Face (1959), but with a formal and stylistic elegance that makes the direction of Henry Cass and the cheap shots he regularly resorts too nothing more than a catalogue of exploitation and cynicism. 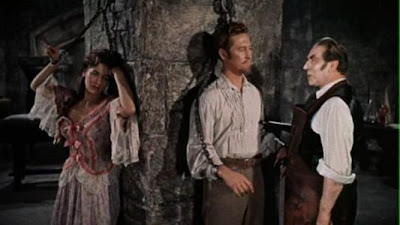 The visual presentation is not aided by the use of Eastman Colour, which in the wrong hands often looks sickly and garish. Perhaps Sangster’s greatest failing here is a screenplay which lacks the necessary back story for the events of the narrative to make meaningful sense. For example we never discover the origins of Carl’s deformities, and never offered reasons for his loyalty to Calistratus and his eventual betrayal of the scalpel wielding maniac. Dr. Pierre is likewise a character without history, and is so dull that it hardly seems conceivable that he could marry a beauty like Madeleine (Barbara Shelley). Blood of the Vampire is interesting from an historical point of view in the development of British horror as a recognisable cycle, but as a contribution to the horror genre it is unmemorable, tasteless, and trivial.
﻿© Shaun Anderson 2010
Posted by Shaun Anderson [The Celluloid Highway] at 16:50