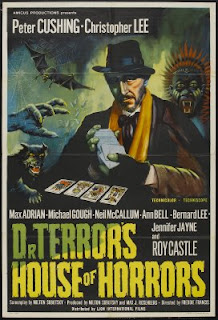 
The beautifully titled Dr. Terror’s House of Horrors holds a prominent place in British horror history for being the first anthology film produced by Amicus Productions - an Anglo-American production house led by Max J. Rosenberg and Milton Subotsky. For a while the blueprint of the portmanteau format, big name ensemble casts, and inspirational low budget filmmaking heralded a commercial rivalry with Hammer. But one that ultimately tailed off in the mid 1970’s as American investment was pulled out of British productions resulting in floundering fortunes for both. Screenwriter Subotsky took as his model the creepy and atmospheric Ealing Studios film Dead of Night (1945). This film utilised the anthology form in order to explore themes of time and memory in post war Britain, and created much final resonance with a bridging story that added to the sense of alienation, dislocation and loss. Subotsky’s effort puts aside any intellectual dimension in favour of presenting five sub-generic horror staples in service of a fun and mildly creepy exercise in genre. 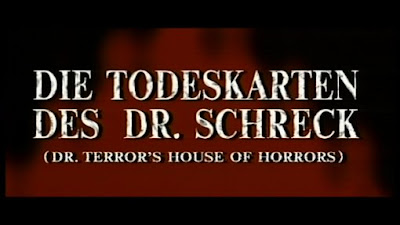 The anthology format by its very nature presents micro-narratives that are brief, but offer short sharp shocks to the audience. Amicus would later go on to employ talented scribes such as Robert Bloch and R. Chetwynd Hayes, and even mine the gore soaked world of EC Comics. Unfortunately Subotsky is more an ideas man than a brilliant writer. The basic kernel of each story is very good, and the bridging segment which concerns five passengers in a rail carriage having their fortunes told by a mysterious stranger known only as Dr. Schreck (German for ‘terror’ - played by the superb Peter Cushing) ultimately provides an excellent payoff. But generally the stories lack depth, detail, and any efforts at characterisation are purely cosmetic. This is not necessarily a criticism of Subotsky, with the anthology format he made a rod for his own back, but the strength of the ideas just about pulls the film through in the end. The fogbound railway setting is superb, claustrophobic train carriages often make for evocative spaces. This is probably the most successful setting in the film, the later stories all suffering from a weakness in art direction that would plague Amicus throughout its history.

The first tale of terror is set in a gothic mansion in the countryside of Scotland, and is a nice little story concerning a Werewolf. For once the production design works, with plenty of dry ice, eerie crypts and a few surprising plot twists. The second tale “Creeping Vine” is probably the films most notorious. The weakest segment by far it involves a family trapped in their horribly modern home by the rapacious plant life outside. Despite the presence of Bernard Lee (M in the Bond films) the premise is so utterly daft that one even forgets about the awful acting of British DJ Alan Freeman. Light relief follows in the shape of “Voodoo” - a tale of a musician (Roy Castle) who decides to plagiarise the music he witnesses at a voodoo rite in Jamaica. For some the over acting of Castle might be an issue, but at this juncture in the film this comedic segment is most welcome. What follows is the films most famous story “Disembodied Hand”. A pompous and pretentious art critic (Christopher Lee) gets his comeuppance for his withering reviews, when the disembodied hand of an artist takes its revenge on him. This might sound as daft as killer plants, but the performances of Lee and Michael Gough as the tormented artist make this a joy to watch. The final story “Vampire” featuring a young Donald Sutherland is a witty final entry, with a clever twist.

By requiring just a few days work from big star names Amicus were able to fill their marquee with actors who drew audiences without breaking their budget. Peter Cushing and Christopher Lee were at the pinnacle of their popularity in 1965, and Donald Sutherland was just on the cusp of stardom. Some of the casting choices such as Alan Freeman can seem peculiar now, but Freeman was also a very popular figure in mid 1960’s Britain. The stories are transparent genre clichés, but director Freddie Francis enthuses them with atmosphere and with a keen eye for visuals that echo his exemplary efforts as an Oscar winning cinematographer. Dr. Terror’s House of Horrors remains a popular and fondly remembered film from a golden age of British horror that succeeded commercially with mild scares rather than body horror and gore.
﻿© Shaun Anderson 2010
Posted by Shaun Anderson [The Celluloid Highway] at 20:38