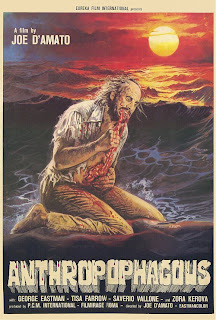 
This excruciatingly dull exercise in cinematic mediocrity achieved an unlikely prominence in the United Kingdom when it found itself a part of the ‘Video Nasty’ hysteria. An uncut video of this film was released in 1980 by VFP in the days before certification, and this grubby item can now fetch very large sums amongst idiots who have too much money and too much time on their hands. It should be remembered that thirty-nine videos were successfully prosecuted by the Director of Public Prosecutions (DPP) and Anthropophagus was one of them, so this is definitely one of the big boys that rubs shoulders with the likes of Cannibal Holocaust (1980), I Spit on Your Grave (1978) and Faces of Death (1978). The vast majority of the titles on this final list of thirty-nine have been released in the UK uncut (some of them on blu-ray!), but Anthropophagus has remained a persistently troubling title for the BBFC. This is almost entirely due to a ridiculous scene towards the end of the film when George Eastman’s cannibalistic psychopath removes a foetus from a heavily pregnant woman and proceeds to eat it. It would seem that the BBFC do not have a healthy appetite for this type of material, even armed with the knowledge that the foetus is merely a skinned rabbit. The upshot of this controversy of course is that when small distributors put films like this forward for certification they take the decision to pre-cut the film and Anthropophagus exists in this form (shorn of two minutes) and is available on DVD under the title The Grim Reaper.

The director of this tedious trash travesty was noted cinematographer Aristide Massaccesi who was clearly so proud of his hardcore porn, horror, and gore movies that he directed the vast majority of them under the pseudonym of Joe D’Amato. D’Amato was tremendously prolific, and tremendously slip shod, his films are most notable for an alarming and almost unbelievable degree of incompetence. In some ways he bears a comparison to that other multi-named and plentiful director of sleaze and trash Jess Franco, inasmuch as they have become figures of cult appreciation amongst the brainless. Anthropophagus finds D’Amato continuing to take baby steps into the horror genre, perhaps he was sick of porn, and strove for legitimacy as a director with foetus eating? The previous years Buio Omega (aka Beyond the Darkness, 1979) showed that for all of D’Amato’s ineptitude and his fetishistic submission to all things base and revolting, he was still capable of producing fairly impressive results. Unfortunately it would seem that a year is a very long time in the field of filmmaking, the difference between Buio Omega and Anthropophagus is so marked, that they could both have easily been made by different people. For Anthropophagus D’Amato chose to write the screenplay himself in collaboration with George Eastman, and perhaps this is where the great difference lay. In fact D’Amato and Eastman also co-produced the picture, so it’s not entirely right to lay the blame exclusively on the shoulders of D’Amato, somewhere along the line Mr. Eastman has to take his share of the culpability. Though it does have to be noted that Eastman’s character, and his crazed wide-eyed performance, does provide what few highlights there are in Anthropophagus. 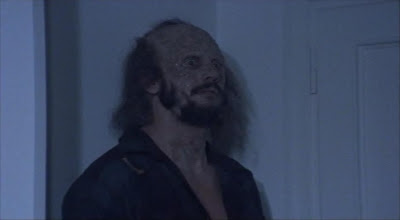 The major weakness of the narrative is that it never really gets going. It remains in first gear for far too long, saving up the majority of its surprises for the last ten minutes. It’s clear from the structure of this movie that D’Amato was not at all familiar with the growing commercial momentum of the American slasher film, because he chooses to punctuate the dull expository moments with more dull expository moments. The problem is compounded further by the fact that the story being told is not particularly interesting. The film opens promisingly enough though with the murder of a young holidaying couple, one is dragged beneath the water, and the other is unwittingly introduced to a meat cleaver. We are soon introduced to a group of tourists, and they are convinced by tagalong Julie (Tisa Farrow) to visit a remote and obscure Greek island. But before we get there we are hammered into catatonia by incessantly dull sight-seeing trips through the streets of what I assume to be Athens, and an endlessly monotonous boat journey. It is only when the group land on the island that the writers decide to include subplots, so prior to that we are stuck with these incredibly boring actors as they go about their shoddy work. There are one or two half-hearted and tacit attempts to create division within the camp; questions of jealousy arise, one character has the gift of second sight (yawn!), and most absurdly of all a heavily pregnant women is invited along for the ride. Of course this character exists entirely for the purpose of the films putrid and disgusting gore centre piece. The other characters are equally purposeless, and the dreary dozy atmosphere of the whole production is not helped by some of the most somnambulistic performances in horror history. Bug eyed Tisa Farrow is beyond belief here, perhaps she brought along a little something to get herself through the long days of fleeing a poorly made up George Eastman? 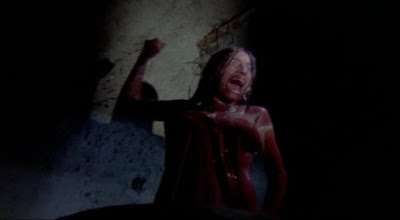 On two occasions D’Amato offers a tantalising hint of genuine filmmaking aptitude. The first is when a hysterical girl leaps out of a wine barrel brandishing a knife, and the second is a night time sequence in which the crazed killer is briefly illuminated in a superbly timed flash of lightning. Aside from these brief moments of tension Anthropophagus is slack and sluggish, though it has to be noted that reasonable mileage is made out of the isolated and inescapable island setting, and throughout D’Amato maintains a sense of doom, though at times it is merely a faint echo. This perhaps reaches its apex in the minutes leading up to the infamous foetus scene; here D’Amato makes impressive use of labyrinthine catacombs replete with mouldering corpses. Less effective are the pointless flashbacks which attempt to explain away how Eastman’s crazed killer came to appreciate the taste of human flesh. The unprofessional sloppiness of the film is extended to the tired synth score provided by Marcello Giombini, which is not only repetitious and uninspired, but at times incredibly clumsy. Anthropophagus is ultimately a very frustrating viewing experience, not only because it is dreadfully boring, but because somewhere within the layers of tedium there is something half decent trying to get out.