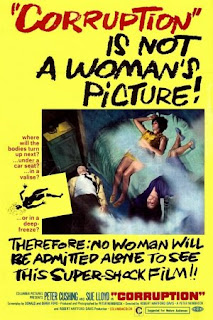 
The semi-obscure 1968 British horror film Corruption belongs to a small, but strangely pervasive, cycle of horror movies that explore the subject of plastic surgery. The film that kick started this trend was Georges Franju’s beautifully composed art/horror hybrid Eyes Without a Face (1960). Franju’s excellent and troubling production was marked by a formal precision that mirrored the cut of Dr. Génnesier’s scalpel; but even so Franju’s film was still marketed as an exploitation picture in the US where it was released under the unforgivable title of The Horror Chamber of Dr. Faustus. The influence of the film however was quite notable; the prolific Spaniard Jess Franco quickly recycled the themes in his surprisingly tight and atmospheric The Awful Dr. Orloff (1962), returned to them in several sequels, and capped of his interest in cosmetic surgery with the indifferent Faceless (1988). The Italian horror/science-fiction picture Atom Age Vampire (1963) was equally unexceptional, though it did give Mario Bava an opportunity to hone his skills as a producer. Other interesting examples such as Circus of Horrors (1960) and The Blood Rose (1969) took the device of plastic surgery down intriguing avenues; the former for example saw Anton Diffring play a typically cold and implacable surgical genius, who uses his gifts to extort, blackmail and control people under the canopy of the big top. More recently another Spaniard Pedro Almodóvar returned to the topic and bridged the art house gap with Eyes Without a Face with his considerably more tedious entry The Skin I Live In (2011). 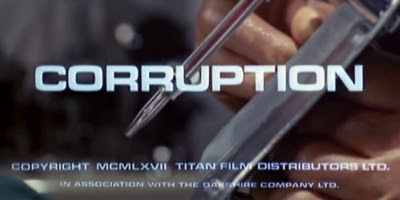 Corruption is an intriguing independent British production that was distributed in the US by Columbia Pictures but promptly sank without trace. Its prospects since have been extremely limited, and despite the prescence of the ever dependable Peter Cushing, the film has largely faded into a murky oblivion. On balance it probably deserves this fate, but one maxim I always adhere too is that any film that has the name Peter Cushing in the credits is worth watching. Corruption might be the one film that stretches this adage to the limit, but Cushing still brings a faultless dignity to a role that requires him to undertake a number of surprisingly violent acts. Cushing plays surgical genius Sir John Rowan, an expert and intellectual, who has somehow managed to bag himself glamour model Lynn Nolan (Sue Lloyd). The lifestyle and vocation of Lynn frequently takes Rowan out of his comfort zone (the operating theatre, intimate dinner parties, his book lined study) and into a firmament of parties, photo shoots, swinging London culture, and an all round sense of counter-cultural permissiveness. One of the major highlights of Corruption is seeing the impeccably attired Rowan (in one scene he wears a lovely purple cravat) attend a party, and his displacement and discomfiture is exacerbated further by the jealousy he feels at all the attention that Lynn is getting. The clash of values is handled quite well by the filmmakers, who continually emphasise Rowan’s awkwardness and irritation toward the vacuous and empty-headed young people he encounters. The party ends prematurely when Rowan’s seething envy, at the increasingly sexualised shoot Lynn is participating in, results in a scuffle, and tragedy ensues when her face is badly burned by a falling lamp. 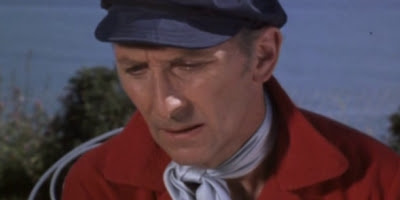 The ensuing plot follows a well trod course as Rowan attempts to restore Lynn’s badly burned face, but the screenplay by Derek and Donald Ford still manages a few surprises. The first is Rowan’s decision to resort to the murder of a prostitute in order to lay his hands on another pituitary gland, after the failure of the first. The second is Lynn’s transformation from a helpless victim of circumstance to an accessory to murder, and eventually to a position where she is blackmailing Rowan to murder for the precious glands. Lynn plays on Rowan’s guilt, and manipulates him into performing heinous crimes that go against all of his heart felt beliefs and values. Rowan’s descent into madness is gradual, the pressure builds as Lynn continuously chips away at him, and as a result Rowan gets increasingly sloppy which motivates their decision to leave the city and spend some time at a seaside cottage. This shift is both welcome and unwelcome. It gives the film some much needed space and offers a pleasant contrast to the claustrophobia of the first half. But the change in locale makes no difference to the plot which just continues on as it had done before. The highlight of this second half is a sequence in which Rowan, replete with his surgical bag, boards a train and carefully selects a carriage which contains a single female occupant. The tension is increased by Rowan’s steely eyed stare which never leaves the women, and her own anxious gaze which flits from the sleazy surgeon, to the leather bag at his feet. The decision to shoot the murder with a fish eye lens adds little to the proceedings; aside from making Cushing look sleazier and sweatier than he ever has before. 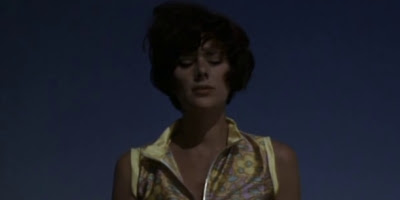 But such good work is quickly undone with an absurd chase scene across a deserted pebble beach, which for some perplexing reason is speeded up. We also have a head in the freezer, and a house invasion sub plot which serves no purpose, other than to provide victims for the surgical laser that goes haywire at the end. The screenplay deserves quite a bit of credit for exploring Rowan’s internal struggle and how he becomes an unwilling murderer. The manner in which Rowan’s success and intellect is broken in the face of his desire/lust/love is tragic, as is the manner in which Rowan’s frailties and vulnerabilities are exposed and manipulated. Lynn’s increasing psychosis and sadism doesn’t quite ring true, but her character development adds a novel touch to the film. One definite misstep is the frequently light jazz soundtrack courtesy of Bill McGuffie which undoes any attempt to create suspense or tension. The direction from Robert Hartford-Davis is workmanlike and perfunctory, but at times gives in to a modish attempt for empty stylistics, and overall lacks the cohesion and style of his slightly superior earlier British horror film The Black Torment (1964). The only man on the credits (aside from Mr. Cushing) to emerge from this and go on to better things was Peter Newbrook (DOP and producer), who later went on to direct the understated and impressive The Asphyx (1973).