The Criterion Collection’s DVD of Burden of Dreams (1982) is an excellent package offering a wealth of important contextual information. This includes commentary tracks from directors Werner Herzog and Les Blank, Blank’s informative and absorbing diary of his time in the Peruvian jungle shooting his documentary, a lengthy retrospective interview with Herzog, and most priceless of all a short 20 minute documentary made by Blank in 1980 called Werner Herzog Eats His Shoe. Any release of short documentary material either by or about Herzog is a mini event in itself, and due to the films content and its title this has always been an exotic and long sought after item for those seeking out Herzog related material. Herzog’s militant attitude to filmmaking is given an opportunity to flourish in this short piece which was filmed during one of numerous breaks in the fragmented and troubled production of Fitzcarraldo (1982). At some point in the late 1970’s Herzog made the bold assertion that he would eat his shoe if young filmmaker Errol Morris succeeded in his quest to make a film. This bet was both an inspiration to Morris and an example of Herzog’s attitude to the importance of individuals battling the odds to achieve their vision. Naturally Morris succeeded and the film opens with Herzog flying in to attend a screening of Gates of Heaven (1978) and to make good on his shoe eating bet. 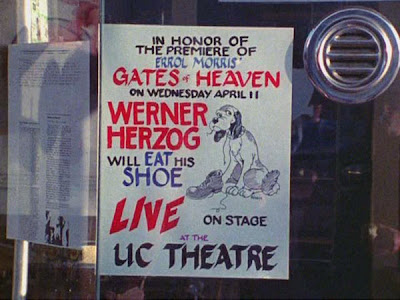 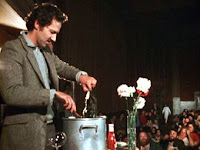 At the time of Werner Herzog Eats His Shoe Morris’ weird documentary about a Californian pet cemetery and its eccentric patrons had yet to secure distribution, Herzog’s stunt is as much an attempt to help Gates of Heaven gain distribution as it is fulfilling a bet. The act of shoe eating becomes a symbolic gesture representative of the difficulties faced by low budget independent filmmakers. Although we get to see some outtakes from Morris’ film, the director himself is absent from this documentary, and as a result the presence of Herzog totally dominates. It offers Herzog an opportunity to fine tune his philosophy about modern civilisation and cinema and Les Blank gives the outspoken Bavarian every chance to explore this. The film opens with Herzog gloomily asserting that certain television programmes and advertisements are destroying the sanctity of our images, and that a war must be declared on this in service of a pursuit for new images untainted by the capitalist media. Herzog’s rhetoric is violent and uncompromising and one can see quite easily how such a man might be prompted to drag a steamship over a mountain ridge in service of a metaphor. For Herzog civilisation is dependent on an adequate language of images and if he has to eat his shoe to alert the world to this problem then so be it. 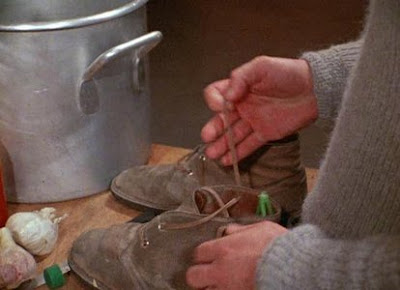 The film slips into the realm of surrealistic comedy as we witness Herzog assisting in the preparation of his meal, busying himself at the task with little sense of irony or humour. Herzog treats it more as a mission and although he concedes he has become a clown there is always the sense of a greater purpose to his deed. Herzog eats his shoe by way of introduction to the screening of Gates of Heaven and its excellent to see Herzog’s magnetic person on stage fielding questions and urging members of the audience to do what is necessary to follow their vision - if this includes stealing raw stock or cameras then so be it. Fairly soon the humiliation of eating his shoe has subsided and Herzog’s filmmaking philosophy has taken centre stage. What makes this film unintentionally hilarious is the seriousness of tone that Herzog adopts and his dead pan approach to the events. But this is somewhat alleviated by Blank who chooses to cross cut the images of Herzog eating his shoe with Chaplin doing the same from an old film. In just 20 minutes Blank manages to say, through the Herzog mouthpiece, an awful lot about modern filmmaking and the hardships involved. This film stands as a testimony to both the seriousness and importance of filmmaking, but also of the ease with which it can slip into the clownish realm of the carnivalesque.
© Shaun Anderson 2010
Posted by Shaun Anderson [The Celluloid Highway] at 15:45