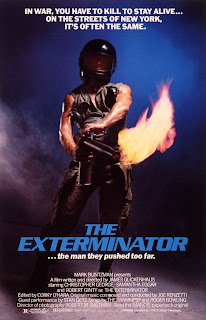 
In an interview for Arrow Video’s recent blu-ray release the writer/director of The Exterminator James Glickenhaus mentions the influence of Sergio Leone’s ‘Dollars’ trilogy, is unable to avoid (though one gets the impression he’d like too) the obvious debt paid to Michael Winner’s Death Wish (1974), but doesn’t even mention Rolling Thunder (1977) the film to which The Exterminator is most closely allied. It seems inconceivable that Glickenhaus wasn’t at least on nodding terms with the Flynn/Schrader production, which was the first film to explore the readjustment of returning veterans within the framework of the vigilante/action sub-genre. Admittedly The Exterminator places almost its entire emphasis on the vigilante/action angle, and emerges as less worthy and thought provoking as a result, but the plus side is that it is much more entertaining due to its total commitment to exploitation elements. In the years following Rolling Thunder cinematic representations of Vietnam had taken a more existential and philosophical route in and out of the conflict. The critical and commercial success of award winning productions such as The Deer Hunter (1978) and Apocalypse Now (1979) had made the subject the territory of self professed ‘auteur’s’ driven by ego, greed, and megalomania. By contrast Glickenhaus chose to drag the subject down into the sewer, to wallow in the shit of Grindhouse exploitation, and I for one am extremely glad of this. 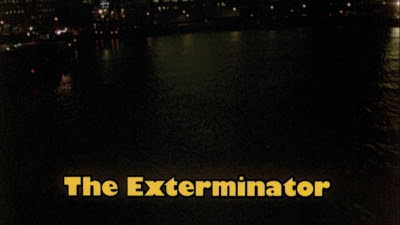 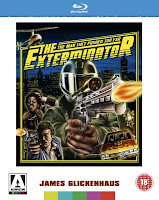 Another area in which The Exterminator differs to Rolling Thunder is in the ambitiousness of the filmmaking. This is highlighted perfectly with an opening prologue set in the tropical wilds of Vietnam; in reality Indian Dunes in California. This is an extremely arresting and quite literally explosive opening that includes a truly shocking slow motion decapitation that illustrates the excellence of Stan Winston’s special make up effects. This prologue is entirely designed to establish the debt owed by George Eastland (Robert Ginty) too his saviour and friend Michael Jefferson (Steve James), and as the dark Vietnam night segues into the concrete skyline of New York, it’s a debt he is later required to pay off, but unfortunately for the criminal scum of New York City, he pays it off with interest! Glickenhaus and DOP Robert M. Baldwin capture the urban decay and disintegration of New York City very successfully, the camera explores the filth and iniquity of the slums, and while there is a certain degree of environmental alienation, this is not extended to our heroic veterans; in fact Eastland and Jefferson seem very well adjusted, they are both holding down respectable jobs at a meat packing plant, and Jefferson is doing a decent job of looking after his family. They are not itching for violence, they are not disillusioned and disenfranchised, and they are respondents to events out of their control. 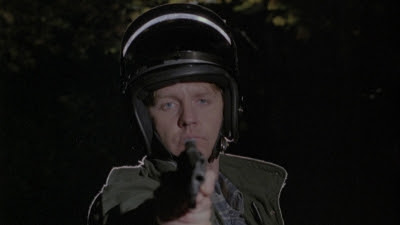 The reason for this is almost certainly due to the fact that Glickenhaus isn’t interested in their social reintegration; the characters are completely one dimensional, because underdeveloped writing serves the premise better. After Jefferson is left for dead and on a life support machine the film shifts gear into a position it is far more comfortable with. Eastland’s revenge is swift and brutal, and is also uncommonly imaginative. There are a few moments when doubt crosses the face of Eastland, who is played with a kind of strange vulnerable naivety by Robert Ginty, but his decision to leave two gang members to have their faces bitten off by rats masks a calculating sadism. This is fate of an ironic and poetical variety; vermin eating vermin. The film becomes a succession of episodes such as this, shot through with a pitch black vein of humour, delivered in dead pan fashion by a man who creates a persona for himself called The Exterminator. One of these episodes has become the signature moment of the movie; in a totally ridiculous plot development Eastland punishes a mob boss for his lies by feeding him through a mincing machine! Moments such as these illustrate the true motivations of the filmmakers, as a thin and insubstantial narrative is a mere device for a succession of lurid and sick events, but these events pack a punch, especially as the director is apt to linger adoringly on moments of violence and cruelty. 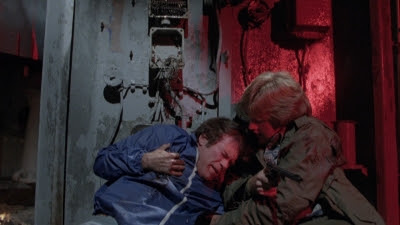 The juvenile screenplay sees fit to mask its intentions by introducing several subplots which add needless padding. The first is a perfunctory and lifeless police investigation by Detective James Dalton (Christopher George), who turns out to be a veteran himself, and in a moment of uncharacteristic solidarity allows The Exterminator an opportunity to flee. Tied in with this is a completely facile and astonishingly stupid romance involving the eccentric cop and Dr. Megan Stewart (Samantha Eggar), this is totally out of place, out of pace, and included purely to add to the running time. The third is an unconvincing and pointless governmental conspiracy that sees a member of the CIA conduct his own covert investigation in order to eliminate The Exterminator to save the blushes of politicians. The writer/director says nothing illuminating about the nature of political corruption; it’s corruption for the sake of it, or in this case to add precious minutes to a skeletal premise. The only moment of surprise in this reactionary tale is the survival of Eastland, who crawls onto the shore to an uncertain future, but one in which his crimes have seemingly gone unpunished. For all its myriad weaknesses somehow The Exterminator, and I admit to being mystified to how, is incredibly entertaining and enjoyable. It doesn’t suffer from pretensions, it treats the material with the boyish enthusiasm it deserves, and ultimately emerges as a worthwhile endeavour.