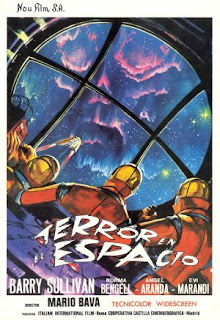 AKA:
Terrore Nello Spazio
Planet of Blood
The Demon Planet
The Haunted Planet
The Planet of Terror


Perhaps more than any other work in Mario Bava’s diverse and fascinating filmography, his 1965 science-fiction/horror effort Planet of the Vampires best illustrates the Italian’s unerring ability to utilise the limited resources at his disposal in a positive fashion. Planet of the Vampires, like the majority of Bava’s pictures, was a threadbare production made on a poverty row budget. It did however have the benefit of Samuel Z. Arkoff and James H. Nicholson as executive producers, and a subsequent guarantee of US distribution through their company AIP. The source material was a short story by Renato Pestriniero entitled One Night of 21 Hours, a story which remains as obscure as the man himself. If anyone knows anything more about Mr. Pestriniero please feel free to leave a comment. This was subsequently adapted for the screen by Mario Bava, Alberto Bevilacqua, Callisto Cosulich, Antonio Roman, and Rafael J. Salvia. A consequence of being in partnership with AIP however was the necessity of an English language version; herein lies one of the great tragedies to afflict Planet of the Vampires. The English version was handled by Danish novelist/screenwriter/director Ib Melchior (The Angry Red Planet [1959], The Time Travellers [1964], Robinson Crusoe on Mars [1964]) and Louis M. Heyward (writer of such masterpieces as Pajama Party [1964], The Ghost in the Invisible Bikini [1966] and Dr. Goldfoot and the ‘S’ Bomb [1966]). My assessment of their contribution to Planet of the Vampires is thus; watch the original Italian language version! 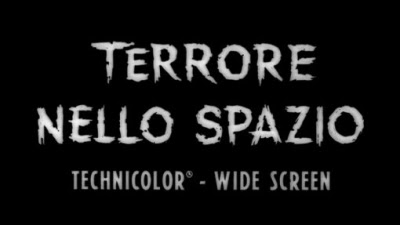 With dialogue that is almost unutterable, a narrative that is slight at best, and a host of disinterested performances (Barry Sullivan looks incredibly uncomfortable in his leather space suit!) one quickly concludes that Planet of the Vampires is only too be enjoyed on a visual level. The opening twenty minutes of the film are interminably dull. We join the narrative as the spaceships Argos and Galliot are in geostationary orbit around the mysterious planet of Aura; the exterior shots of the spacecraft are reasonably successful, but the interior of the Argos suggests production design motivated by idleness rather than artistic brilliance. The planet seems to have a will of its own, and before long the Galliot has succumbed to its gravity and atmosphere. The same thing happens to the Argos and we are given the unintentionally hilarious sight of the crew struggling due to the gravitational pull, and the even more amusing sight of crewmembers under the mental control of forces which resort swiftly to violence. These shipboard moments could have been handled in a tense and suspenseful manner, but the leather spacesuits (replete with chunky collars), and the obvious fear about damage to the carefully constructed hairstyles on display robs these scenes of menace. It does however lend the film an instant camp appeal which will be pleasing to some. 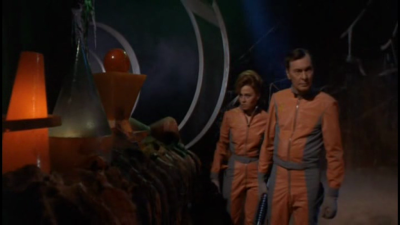 When the action shifts to the planet of Aura, the film becomes an entirely different proposition. Bava’s skill for conjuring up arresting visuals reaches a moment of brilliance in the strange uninhabited landscape of Aura. A perpetual swirling mist wreathes the surface of the alien world, the rock formations are otherworldly and strange, the use of red and green gels lends the planet an eerie gothic sensibility, and the bright floating orbs that spin and weave in the air adds further psychedelic colour to the palette. But Aura isn’t as unfamiliar a space as might be first suspected; this is a world very familiar to anyone who has had the pleasure of watching Black Sabbath (1963) or Kill Baby, Kill (1966), and such are its gothic flavourings it even has a haunted house in the shape of an ancient and abandoned spacecraft. This sequence which sees Captain Markary and the stunning space babe Sanya (Norma Bengell) exploring the alien tomb has been of major influence, despite the bullshit denials of those who borrowed from it. The giant alien skeleton is a very impressive prop, and the ornate design of the vessel, with its circular doors, odd alien artefacts, and bizarre colours, is the single most arresting space in the film. 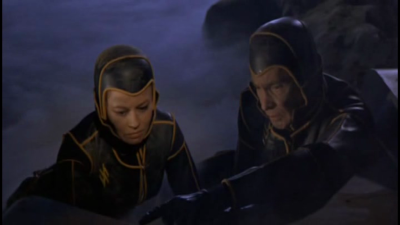 Less arresting are the frequently unconvincing encounters between the crew of the Argos, and the possessed bodies that populate the Galliot. The image of the corpses slowly rising from their graves adds a welcome touch of horror, but the vampires of the films title is something of a misnomer, the invisible alien creatures have more in common with the body snatchers of Jack Finney’s novel, and their right to invade the body of man in order to ensure their survival raises an intriguing philosophical question that the film neither has the time nor the inclination to explore. They are also incredible weak and vulnerable, and easily dispatched with the suitably futuristic laser guns the leather clad space explorer’s tote. There is a major vacuum in Planet of the Vampires and it exists due to a lack of context or back story. We are given no indication as to the origins of the Argos and Galliot crews, they all answer to human sounding names, yet the films final ‘twist’ suggests that our planet is totally unfamiliar to them. It wouldn’t have taken a great deal of exposition to have filled in these irritating blanks. But as I mentioned earlier such concerns are of peripheral importance; the disposable characters are actually necessary, because anything more complicated, subtle, or nuanced would detract from the primary motivating force in this picture, which is the total commitment to Mario Bava’s visual methodologies. Planet of the Vampires looks great, and it also sounds great thanks to a creepy electronic score from Gino Marinuzzi Jr, but these are the only levels it succeeds on.