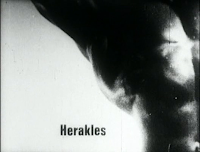 This short nine minute film would be totally insignificant were it not for the fact that it marked the debut to filmmaking of Werner Herzog. The barmy Bavarian was a mere twenty years old when he wrote, directed, produced, and edited this somewhat amateurish effort. It is fair to say that Herakles was an exercise; an experiment on Herzog’s part to see if he could actually make a film. But even at this early stage Herzog’s decision to shoot on 35mm film shows that he had ambitions that far exceeded the humble nature of this production. But Herakles was an instructive lesson, especially for a young man who largely existed in a world without cinematic reference points, and whose influences were extremely limited. In this film Herzog explores the art of editing, and although Herakles is little more than an editorial exercise, it does contain a few images that will be of interest to Herzog enthusiasts. 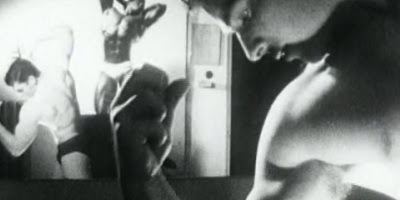 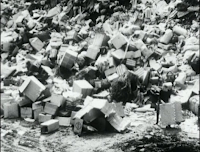 A coup for the film was the participation of Reinhardt Lichtenberg who in 1962 was crowned Mr. Germany, and it is Lichtenberg who is the locus of attention in the sequences that explore the training programme of the modern bodybuilder. Herzog’s relatively static camera not only shows the rippling torso’s of these self styled supermen as they pump iron, but also shows the narcissism that forms a logical flipside to their grunting endeavours. The meat heads pose in front of mirrors, and on stages, and clearly relish the presence of the camera, but the overriding sensation is of a self-contained and self-absorbed world in which reality is measured by size and definition. Herzog highlights this selfishness with a series of impressive shots culled from film libraries; a huge rubbish dump, uniformed women marching in unison, surprisingly graphic footage of an accident at a motor race in which members of the audience were killed, traffic jams, and fighter planes dropping their deadly payload to explosive effect. 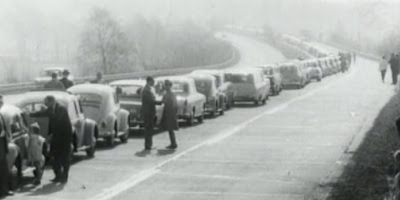 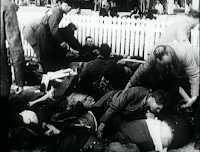 But what this juxtaposition is intended to highlight remains unclear. At the same time as Herzog equates the bodybuilders to man-made disasters, he includes on-screen questions which quote six of the twelve labours of Hercules. The bodybuilders are both selfish narcissists, and figures of modern myth, heroes to be admired for astonishing feats of strength.  The repetitive machine like actions of the bodybuilders, and the profusion of mechanical devices featured in the juxtaposed images is perhaps some statement on stereotypical national characteristics; and it is impossible not to view images of bodily perfection and mass destruction without the vague spectre of the recent past. There is the merest suggestion in Herakles that Herzog is trying to make a major or profound statement, but the director has been uncharacteristically tight lipped on the meanings of this film. In fact Herzog has spent most of his later career dismissing it as a pointless failure. 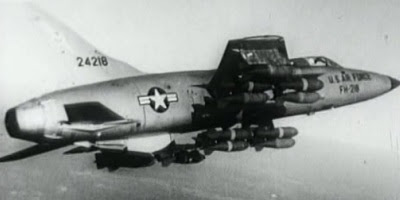 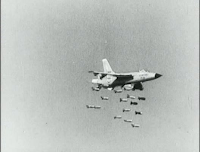 The earnestness of the imagery however does suggest certain pretentiousness on the part of the young filmmaker. It’s not quite as self-conscious as a student film, but it is clear already at this stage Herzog prefers to deal in metaphors. Although the themes of the film would not resonate throughout his later career, the images of human beings under enormous stress (either voluntarily as with the bodybuilders) or involuntarily (as with the victims of the accident) would become a major pre-occupation. The bodybuilders invite and welcome the pressure, they embrace it eagerly, and in them we can perhaps see a hint of Fitzcarraldo or Aguirre. At this stage though we only see pessimism, satire, and cynicism...it would be a few years yet before Herzog would completely embrace the fevered world of dreams, and realise the importance of landscape as a reflection of our inner being.