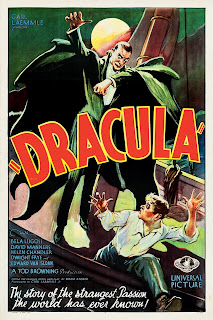 For me one of the most eagerly awaited releases of 2012 was the eight disc Universal Monsters blu-ray box set. It was indeed a joy to discover that this would be one of the titles put out to celebrate Universal’s 100th anniversary, and a further joy to be able to experience Dracula (and its Spanish language variant, both 1931), Frankenstein (1931), The Mummy (1932), The Invisible Man (1933), Bride of Frankenstein (1935), The Wolf Man (1941), Phantom of the Opera (1943) and Creature from the Black Lagoon (1954) in high definition. Though I must spoil Universal’s horror party somewhat by asking what on earth were they thinking including their lacklustre and tedious second attempt at Phantom of the Opera? Surely the sublime dark brilliance of The Black Cat (1934) would have been a more contextually satisfying inclusion, not to mention a damn site more entertaining. That aside the collection is pretty much faultless (the plethora of special features is almost overwhelming) and over the next few weeks I will slowly work my way through it, and hope to bring you reviews of all the films. So we begin with the film that gave commercial impetus to Universal’s appetite for horror, the lukewarm and rather monotonous Dracula. 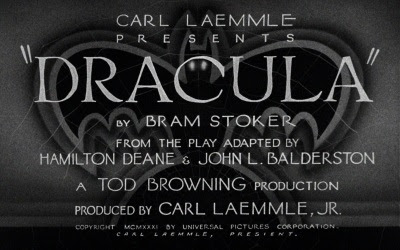 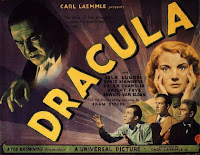 The decision to adapt the hugely successful Broadway stage play by Hamilton Deane and John L. Balderston was in retrospect an important one. The bloated prose and unnecessarily complex structure of Bram Stokers trashy novel has never been conducive to adaptation and virtually every screen version has excised vast swathes of the verbose baggage which Stoker uses to pad out his melodrama. But there was a creative cost in Universal’s decision; whilst it was now possible to create a 75 minute movie version of Dracula, the screenplay subsequently inherited a myriad number of narrative strategies that betrayed the theatrical origins of the source material. This is extremely evident in the unbalanced nature of the film. The first twenty minutes of the film is expansive, and progresses at a brisk pace, but the moment the action shifts to London the film shudders to a halt, and crawls snail-like to its criminally anti-climactic conclusion. The film also inherited the rich stylisations and bizarre magnetism of Hungarian Bèla Lugosi, who only got the role after Universal’s preferred choice died, and also due to his eager willingness to take on the role for little recompense. This was the first of many indignities Lugosi endured throughout his troubled career. 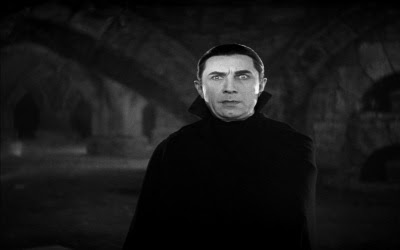 Lugosi is certainly one of the most distinctive features of Dracula; with his ponderous lethargic movements, long drawn out accentuated dialogue, and mesmerising eyes (superbly lit by cinematographer Karl Freund) he effortlessly creates a sense of foreign otherness. Even as he strolls languidly through the foggy streets of London he manages to communicate a sense of strangeness, a difference which is emphasised by the awkwardness of his social interactions. The opening Transylvanian set sequences manage to conflate much of what has made Dracula such a memorable and iconic film. From the absurd over-acting of the superstitious peasant folk, the impressive matte paintings of an unaccredited John P. Fulton, and the decaying mouldering crypt which Dracula and his three brides share with Armadillo’s, sundry Spiders, and other crawling things, to Dracula’s first immortal lines – “I am Dracula, I bid you welcome!”, the supernatural way he bypasses thick cobwebs, and the regular appearances of the bat that signifies Dracula is a constant omnipotent observer. In these moments Freund draws extensively on his background working in the Expressionist cinema of Germany, with a series of beautifully lit scenes; the shadows as much an ally to Dracula as the three vampire women who eagerly eye up Renfield (Dwight Frye). The direction from Tod Browning (a director with more than a passing interest in society’s outcasts) is assured and serviceable here – but the moment that Castle Dracula is replaced by Dr. Seward’s Sanatorium and the film moves onto its second act, Dracula begins to die a slow and painful death. 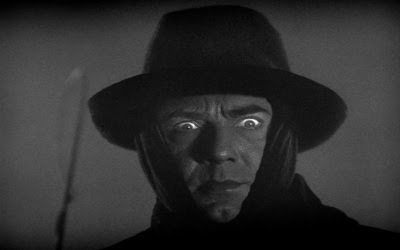 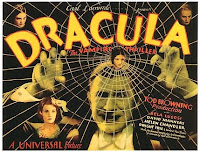 As a space Carfax Abbey is indistinguishable from Castle Dracula, but the Sanitorium is significantly less successful; we are given no sense of it as an asylum, indeed Renfield escapes from his cell with such ease to join the chattering experts in the drawing room, that he almost seems as though he is part of their group. It is in the bedroom and drawing room sets where Dracula becomes very stagy and talky – Tarantino would be proud at the level of talk! The film really only has room for one foreign character delivering his lines slowly and torturously, so Van Helsing (Edward Van Sloan) adds boredom to the proceedings rather than excitement. The few sequences where he and Dracula meet are totally devoid of tension as the actors do battle to see who can drag their lines out the longest; Lugosi wins of course with the excellent line “For one who has not lived a single lifetime, you’re a wise man, Van Helsing!” The remaining actors in this static tableaux are incredibly dull and unengaging, the romantic subplot bereft of passion and integrity. Indeed at times the performances border on incredibly irritating; David Manners is utterly pathetic as John Harker, and the dreadful accent of Charles K. Gerrard’s orderly Martin, makes one wish they had shot the film silently. But Dracula was the first horror talkie and its place in history is assured for that alone. The real failure of Dracula though is the craven gutted way that it continually resorts to the use of off screen space, and characters telling the audience what has happened instead of showing them. I of course appreciate the film had to contend with both a low budget and the Hays Code, but it would have been nice to have just seen once, the large wolf that is referred too on several occasions. This version of Dracula offers no fangs, no bite marks, and even the Count himself is vanquished off screen by the odious Van Helsing. The film also has no music, aside from the Swan Lake extract which opens the film. But this is actually a good decision, for it helps to create a very palpable sense of menace, at least in the opening sequences. Ironically enough Dracula is significantly less cinematic than Universal’s earlier horror effort The Phantom of the Opera (1925), but it is the stilted un-cinematic theatrics of Dracula which helped to create a discreet cinematic horror genre. The only people to emerge from Dracula with credit are Karl Freund (who was rightly rewarded with several directing opportunities, most notably The Mummy [1932] and Mad Love [1935]), Dwight Frye who is an arresting sight as the fly eating Renfield, and Mr. Lugosi who embarked on a career of being misused, mistreated and underappreciated.