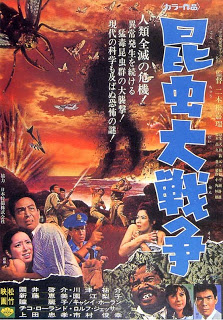 Genocide
War of the Insects


One of the more intriguing responses to the monster movie (kaiju-eiga) boom of the 1950’s and 1960’s was the one undertaken by Shochiku. The studio was more commonly associated with the prestigious and formally precise productions of Kenji Mizoguchi and Yasujiro Ozu, and the burgeoning formal experimentation of the politically motivated Japanese new wave. But in the late 1960’s the studio produced four science-fiction/horror/fantasy productions in quick succession in order to reap the fertile and profitable soil sown by the likes of Godzilla, Gamera, Mothra, King Kong and Ghidorah.  The first was the laughably inept The X from Outer Space (1967), a film generally regarded as one of the weaker entries in the kaiju-eiga cycle. The next was the more conceptually ambitious Goke, Bodysnatcher from Hell (1968), an intriguing blend of UFO’s, vampirism and apocalyptic disaster. The films arresting visual palette and its strong premise have enabled it to become the most visible of the Shociku quartet. The third was the peculiar The Living Skeleton (1968), which was shot in black and white, and was an eerie tale of revenge overflowing with the atmospherics of kaidan. The fourth and final effort is the film under discussion here, a revolt of nature horror film with an elaborate and complicated narrative that includes the search for an H-bomb, a man wrongly convicted of murder, communist infiltrators, a survivor of the Holocaust, and the apocalypse. It’s a heady mix, drowning in a sea of ideas, an unwieldy beast that ultimately slays itself on its own convolution. 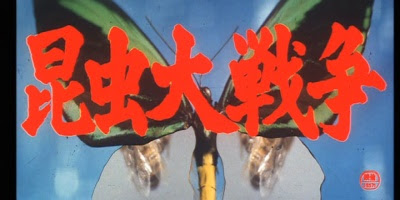 The film opens in an almost identical fashion to Goke, Bodysnatcher from Hell with a plane crash. On this occasion however the aircraft happens to be an American bomber carrying an H-bomb (why it is flying over populated areas of Japan with such a deadly cargo is never explained), and instead of crazed birds flying into the windows, it is a swarm of bees. The explanation for the insect’s sudden ability to fly at such high altitude is explained away later with a few throwaway lines. The key element lacking though is the beautiful and surreal colours employed in Goke, the most stunning of which is an apocalyptic red sky. This lack is generally felt throughout the picture, and despite the mutual low budgets of both films, Genocide looks significantly more threadbare. In addition to plot similarities the two films share a number of key personnel. The story, such as it is, was dreamed up by Kingen Amada and it was adapted to the screen by Susumu Takaku, who also wrote the screenplay for Goke. Other employees drafted over were musician Shunsuke Kikuchi, whose contribution to the film is arguably the most successful; and cinematographer Shizuo Hirase who is afforded considerably less scope for visual experimentation, though a sequence in which Dr. Naguma (Keisuke Sonoi) endures the bite of an infected insect in order to experience the effects, and see if his vaccine works, is a wonderfully tripped out sequence full of weird psychedelic colours. The director Kazui Nihonmatsu was brought back after his work on The X from Outer Space, though he struggles at times to make the narrative cohere in visual terms.

The key thematic pulse that binds Goke and Genocide are its anti-war sympathies. If such a message seems simplified and overstated in Goke, in Genocide it is taken to an alarming degree of obviousness. This includes a crazed soldier who has a terror of insect life (presumably fermented in the jungles of Indochina), and who suffers flashbacks to military atrocities, and is determined to avoid returning to the front line; even if that means helping to crash an H-bomb carrying aircraft. But even more perplexing is the character of Annabelle (Kathy Moran) who has dedicated her life to wiping out the human race after suffering the torment of a Nazi concentration camp. Her answer to the war and misery is to create a race of modified bees to wipe out the human scourge that plagues the planet. Though this minor detail is something she has concealed from her communist paymasters, who have employed her to create the next great weapon in germ warfare for their personal use. All these elements come together on a small Japanese island community, offering a bizarre microcosm of the anxieties and tensions abroad in the real world. But the sequences involving the warring ideological parties are weak and ill conceived. The Americans seek the H-bomb at all cost, and if lives must be lost in order to avoid it getting into enemy hands then so be it. But the decision by the American command to drop the bomb anyway, in order to destroy the insect threat, and clean up the trail left by their ham-fisted interference is stunning in its stupidity. The final five minutes of this film have to be seen to be believed.

The film works a lot better when it concentrates on the normal human beings involved in this crazed and oddball situation. A young couple struggle with issues of poverty, adultery, impending parenthood, and false implications of murder, and emerge with dignity and integrity. The heroic Dr. Naguma embodies the liberalism of the screenplay, and continually challenges the Americans simplistic cold war drivel. The Japanese cast must also combat the shoddy amateurishness of the American actors, who litter the film with unconvincing displays. Genocide also includes screen time for an attempted rape, and other moments of sleaze and perversity, thus marking it out as the most obviously exploitative of the Shochiku quartet. But this is alleviated somewhat by the excellent macro-photographic close ups of the insects, especially a repeated shot of insects biting into skin and flesh. But the insects are sadly underused, and contrary to the trailer and promotion, there isn’t a single giant one in sight. The suggestion that the insects are acting on their own will, after getting fed up of seeing mankind destroy the planet with its wars, after being bred as a weapon, is frankly astonishing. But Genocide is bloated with such idiocies. In the fashion of the era the film ends in the apocalyptic annihilation of the island community, but the downbeat and destructive ending of Genocide does not reach the intensity and power of the conclusion to Goke. If Genocide has been constructed along the same pulp comic book lines of Goke it may have worked better, but what ultimately dooms this film to failure, is a structurally unsound plot that borders on inept, a liberal anti-war bias which is as subtle as a brick in the face, and far too much political intent at the cost of fun and entertainment.