AKA:
Guns in the Afternoon
Sacramento


There is an internal paradox to the delightful western Ride the High Country that makes it an intriguing and important proposition. For the actors Randolph Scott and Joel McCrea it was the concluding statement on careers honed in the dust and gunfire of the traditional western. For young filmmaker Sam Peckinpah it was a second attempt at directing a feature film after the forgettable and obscure The Deadly Companions (1961). Within Ride the High Country’s core is both a lamentation for the end of a traditional mode of generic address, and excitement for the new horizons opened by generic revisionism. Here Peckinpah shows his love for the traditional western, but it is a love tempered by an impatient need to move on and push the boundaries of the form. For some the nihilistic bloodbath that concluded The Wild Bunch (1969) may have come as a surprise, but Peckinpah was already making smoke signals in that direction with this film. Up to this point Peckinpah was chiefly known as a writer for television. He had contributed scripts and some direction for episodes of Gun Law (1955-8), Broken Arrow (1957-8), Zane Grey Theatre (1958-9) and The Rifleman (1958-63). His main contribution to western lore however was the creation of The Westerner (1960). This series only lasted for 13 episodes but was vital in securing interest from the major Hollywood studios. Peckinpah’s knowledge of generic typography was cultivated in the restrictive milieu of television, but the expansive possibillities of film allowed him to paint a much larger and thematically rich canvas with his second film.
Read more »
Posted by Shaun Anderson [The Celluloid Highway] at 16:05 4 comments:


The gunfight at the OK Corral and the events surrounding it have become one of the most enduring of Hollywood myths. The traditional Hollywood western is particularly suited to the propagation of myths and legends, the efficiency of the genre lies in its attitude too its own mythology and symbolism, so recognisably iconographic, it is no surprise that film theorists most often turn to the western when discussing genre. It now seems an entirely logical step for the filmmaker most associated with the western to tackle the story of Wyatt Earp. Although John Ford went on to make a number of revisionist westerns in his later career - most notably Sergeant Rutledge (1960) and Cheyenne Autumn (1964), his treatment of the Earp legend is very different to what we might expect. The screenplay by Samuel G. Engel, Winston Miller and Sam Hellman was based on the book Wyatt Earp: Frontier Marshal by Stuart N. Lake. A book which was allegedly written with the collaboration of Earp himself. So we might expect some historical verisimilitude, but the screenplay takes a number of liberties with the real events as Ford indulges in the themes for which he has become well known. In dramatic terms this is a peculiar film. The film does not build to the predictable showdown. It meanders along and concerns itself with very small and intimate details. The gunfight itself is farcically downplayed, and totally lacks any sense of tension or catharsis.
Read more »
Posted by Shaun Anderson [The Celluloid Highway] at 17:04 5 comments: 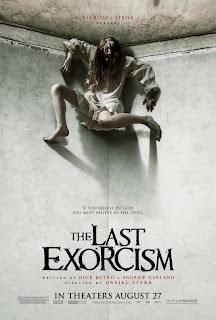 
The Blair Witch Project (1999) was a heavy stone thrown into calm waters, and ever since this event the ripples on the surface have steadily increased. In a single stroke The Blair Witch Project validated the internet as a source of promotion, and legitimised the faux documentary form within the terms of genre filmmaking as commercially viable. It did all the things that the far superior The Last Broadcast (1998) did not. Although The Last Broadcast failed to reach a large audience, it remains for me the most creatively successful mock-documentary made. The so called ‘mockumentary’ has almost become a genre in its own right. I say almost because it still relies heavily on the tropes of pre-existing genres, a reliance that totally undermines any documented fake reality the filmmakers are attempting to conjure up. These films should be able to address questions of reality in a more philosophical manner, but it is their attitude to reality which ultimately makes them little more than hollow exercises in style. In these films reality itself becomes a stylistic choice, and when all is said and done, reality is used merely as a device to create more scares. There is of course a far more pragmatic reason for the sudden upsurge in these type of films; the availability and cheapness of technology means they are dirt cheap to produce. But it seems that gone are the days when inspirational filmmakers could turn a low budget into an opportunity too find different ways of producing interesting results.
Read more »
Posted by Shaun Anderson [The Celluloid Highway] at 17:13 6 comments: