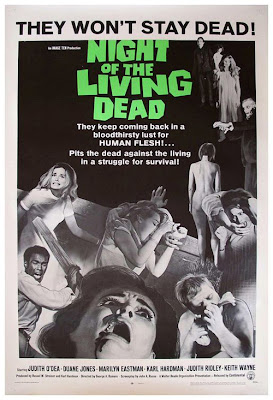 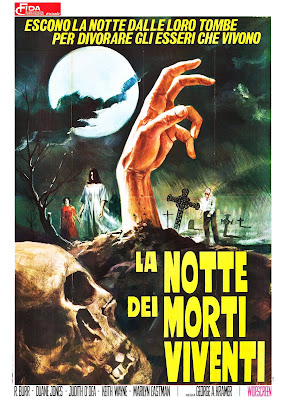 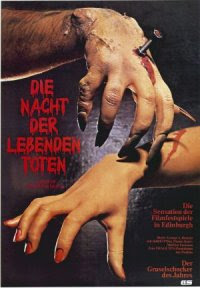 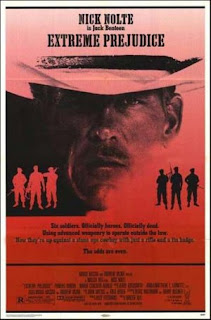 
Extreme Prejudice is a criminally underrated and underappreciated film that has improved considerably with time. It was pretty much lost in the macho action movie shuffle in the late 1980’s, seemingly unable to compete with the empty headed adventures of Schwarzenegger, Segal, Stallone et al. One immediately notices its difference by the decision to cast Nick Nolte as the stiff and stoic Texas Ranger Jack Benteen. Nolte is a hard man here, dangerous and ruthlessly violent, he prefers direct physical confrontation over discussion. When one considers that his most recent roles included Down and Out in Beverly Hills (1986), Grace Quigley (1985) and Teachers (1984) one can see that Nolte was very much being cast against type. To say he does an excellent job is something of an understatement. If Extreme Prejudice possesses one thing that separates it from the other action films being made at the time, it is in the superbly convincing performances. The cast also includes Powers Boothe, Rip Torn, Michael Ironside, Maria Conchito Alonso, and Clancy Brown. A beautiful ensemble of solid character actors who are clearly deeply committed to the material. If the cast isn’t enough to whet your appetite the film was directed by Walter Hill, with a screenplay co-written by John Milius. This is macho action movie heaven, and I for one enjoyed every minute.
Read more »
Posted by Shaun Anderson [The Celluloid Highway] at 16:59 18 comments:


Despite having shown genuine acting ability, and a genuine flair for quirky and peculiar characters, actor Nicolas Cage continues to make atrocious career choices. He recently crafted a wonderful performance as the corrupt New Orleans detective Terence McDonagh in Werner Herzog’s Bad Lieutenant: Port of Call New Orleans (2009). It came as a surprise to most because it reminded audiences that Cage did once possess something special. But films such as Raising Arizona (1987), Wild at Heart (1990) and Leaving Las Vegas (1995) are consigned to history. Only of use to Cage fans and film scholars. The latter always willing to drift into the mists of time for something interesting. For a certain generation Nicolas Cage is represented by films like National Treasure (2004), Next (2007) and The Sorcerer’s Apprentice (2010). He is a man that will seemingly agree to appear in anything. This tends to be something actors do when their star has burned out. Cage can certainly afford to be selective, and is obviously cine-literate enough to know that one doesn’t pass up the chance to work with Werner Herzog. This only makes his decision to appear in something like Season of the Witch all the more perplexing. It is made worse by the fact that Cage is hopelessly miscast. I can’t think of a more inappropriate person to play a 14th century knight rallying against the hypocrisies of the Church.
Read more »
Posted by Shaun Anderson [The Celluloid Highway] at 17:19 11 comments:


Cult Japanese filmmaker Shinya Tsukamoto has time and again proven himself to be the perfect embodiment of what is traditionally understood as an auteur. From the moment he exploded in a shower of twisted metal onto the international scene with his dystopian tale of bodily transformation Tetsuo (1989), he has written, directed, produced, and designed a raft of uniquely distinctive and unusual feature films. In the years since the hyper-stylised avant-garde formalism of Tetsuo, Tsukamoto’s visual experimentalism has mellowed somewhat. But films such as Hiruko the Goblin (1991), Tokyo Fist (1995), Bullet Ballet (1998) and Vital (2004) continue to document his fascination with the human body.  Whether it be in states of decay or in revolt. The revolution of the human body in the face of a decaying urbanisation is a persistent theme of his work. In his films technology and capitalism are rendered banal and are often the initial cause for an evolution of the flesh. Tsukamoto’s vision is at times a unique one, but it is couched within stylistic and thematic terms which evoke the industrialised dreamscapes of David Lynch, and the grotesque body horror of David Cronenberg. His own influence can be felt on filmmakers such as Darren Aronofsky, Takashi Miike and Jan Kounen. Tsukamoto is also fiercely independent and through his own production company Kaijyu Theatre commands complete autonomy and the freedom too express his innermost fantasies.
Read more »
Posted by Shaun Anderson [The Celluloid Highway] at 20:26 No comments:


South Korean filmmaker Jee-woon Kim continues to enjoy a remarkable level of distribution in the West. His latest film I Saw the Devil was paraded around the festival circuit, before receiving relatively wide distribution in the both the US and the UK. Kim first emerged as a name of note with his debut film The Quiet Family (1998) a comedy/horror film which was loosely remade in typically excessive fashion by Takashi Miike under the moniker The Happiness of the Katakuris (2002). Although interesting, his debut film was left in the dust with the release of A Tale of Two Sisters (2003), a stylish psychological horror film clearly inspired by the popularity of J-horror. This excellent film was remade in America as The Uninvited (2009). The result was a predictably desultory and pathetic re-imagining bled dry of all the aspects that made the original so engaging. Kim confirmed his generic utility with A Bittersweet Life (2005) and The Good, The Bad and The Weird (2008). The former a wonderfully energetic, but incredibly violent gangster movie, and the latter a sprawling western adventure inspired by Sergio Leone’s spaghetti westerns. All of these films have received above average distribution for South Korean films, which is a testament to Kim’s ability to craft generically satisfying material that still manages to push the boundaries of the form. In comparison to his previous films, I Saw the Devil is significantly less interesting. It is not a failure, but it is perhaps Kim’s first stumble, in a career that has thus far been very impressive.
Read more »
Posted by Shaun Anderson [The Celluloid Highway] at 21:51 4 comments:

AKA:
Shiryô no wana
Tokyo Snuff


Evil Dead Trap is an absorbing oddity that takes it inspiration from a myriad of western sources. Unusually for a Japanese horror film it pays little heed to its own indigenous traditions and history, preferring to take its cue from the expectations of westernised genres. The screenplay by Takashi Ishii could have conceivably been set anywhere and it gives the film a strange lack of cultural specificity which only confirms the artifice of the whole proposition. Ishii went on to much more interesting things as a writer and director. Films such as the Takeshi Kitano starring Gonin (1995) and the unusual arty rape/revenge thriller Freeze Me (2000). The director Toshiharu Ikeda remains something of an obscurity in the west. Evil Dead Trap is the only film of his that had reasonable trans-national distribution. It is incredibly easy to see why it achieved this. The title itself is a reference to Sam Raimi’s irreverent gore soaked debut The Evil Dead (1981), and the film abounds with the echoes of other filmmakers and films. Perhaps the most notable influence here is the hyper-stylised baroque fantasies of Dario Argento. This inter-textual plundering includes a scene in which maggots fall from a ceiling onto an unsuspecting woman’s head lifted from Suspiria (1977), the use of a colour scheme that evokes both Suspiria and its sequel Inferno (1980), and the repetition of a musical theme courtesy of composer Tomohiko Kira. Unfortunately shoddy prints and patchwork distribution have lessened the effect of Ikeda’s carefully constructed pallette. But the film still emerges as highly inventive and incredibly gory. Qualities that have helped it to become something of a cult film.
Read more »
Posted by Shaun Anderson [The Celluloid Highway] at 17:34 6 comments:


In principal I do not object to the idea of remaking films. Genres are after all founded upon filmmaking elements that are entirely familiar to the audience. Anyone with a love of genre cinema, should by the very definition of a genre, have a very high tolerance for the idea of remakes. The trick of course is to present those familiar elements in a manner which seems fresh and new, that so many genre films fail to do this, and in effect become remakes by any other name seems to be overlooked in favour of outright hostility toward the slew of horror remakes that are helping to keep the genre (commercially at least) alive. American cinema is a cinema of remakes, and if you think it is bad now, spare a thought for the silent era, a time in which the vogue for remaking films was at its height. No, the problem for me is pointless remakes. It is not enough simply to remake a film for commercial reasons, one has to provide something that the original doesn’t. The easiest way might be to take a film and adapt its principal themes to a socio/political concern of relevance. The remake of Dawn of the Dead (2004) manages to achieve this, and it surprises me not, that it is largely considered one of the better remakes. The first thing you need then is a film with the plot potential to do this. The original I Spit on Your Grave (1978) is a witless and moronic film, but this could be forgiven if there was some aspect to it that might be relevant to contemporary society. Instead the remake opts to simply regurgitate the same themes and concerns as the original did in 1978. The result is a film that is utterly and completely pointless.
Read more »
Posted by Shaun Anderson [The Celluloid Highway] at 22:31 10 comments:


Between 1950 and 1955 filmmaker Anthony Mann made five westerns in collaboration with actor James Stewart. From a structural point of view they adhered quite closely to the traditional western. There was nothing exceptional about them in terms of their narratives and their use of iconography. But the interest in rich characterisation, psychological states, motivation, and back story was very rare for the genre. The Mann/Stewart collaborations are distinctive and cerebral, with every element of the plot in strict synthesis with the story. They are dark affairs with an abiding interest in the hearts of men and women. The Mann/Stewart westerns are less inclined toward the mythological aspects of the traditional western, but at the same time they do not quite embrace what would later be termed revisionist. In these films the hero is not interchangeable with the villains, but the villains are imbued with complex motivations that makes the task of the hero that much more problematic. The Man from Laramie was the final collaboration between the two, and although it doesn’t quite reach the heights of Winchester ‘73 (1950) or Bend of the River (1952), it is still a solid and fitting climax to a generic relationship as equally important as Ford/Wayne.
Read more »
Posted by Shaun Anderson [The Celluloid Highway] at 21:01 3 comments: