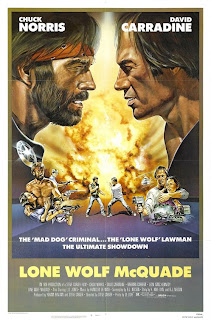 
The Chuck Norris action vehicle Lone Wolf McQuade immediately signifies its intent with an opening credit sequence that highlights the sub-Morricone music of Francesco De Masi. We are firmly in the territory of the modern day spaghetti western pastiche. In the early moments the film seems at pains to emphasise its status as a contemporary western. We have a group of modern day Mexican bandits horse rustling, we have plentiful shots of the wide open expanse of the dusty Texan landscape, and repeated close ups of Norris’ eyes and grim expression. If this isn’t enough we also get a musical fanfare when Norris reveals the badge on his chest that signifies he is a Texas Ranger. This action sequence is entirely constructed around the need to establish the tough guy credentials of J. J. McQuade. One would have thought the casting of Norris was enough, but the film is determined to avoid the cinematic shorthand his iconic presence signifies. In one fell swoop the opening action set piece establishes McQuade’s exceptional marksmanship, incredible martial arts skills, his status as a rebellious loner, and the incompetence of his fellow rangers. With every facet of McQuade’s character established in under eight minutes of screen time, director Steve Carver can get on with the job of stringing together an absurd, but oddly enjoyable narrative. 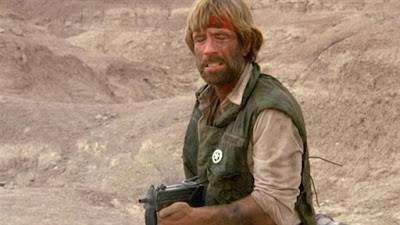 ﻿After facing the not inconsiderable opposition of Bruce Lee in The Way of the Dragon (1972) it seems only right that that a decade later Norris gets the opportunity to face another action heavyweight in the shape of David Carradine. Carradine, with more than a touch of the sardonic, plays drug kingpin Rawley Wilkes. Wilkes surrounds himself with a small army equipped with the latest military hardware, and parades around in a succession of tasteless jumpers. The film is entirely constructed around the inevitable showdown between these two titans, and to his credit Carver steadily builds towards this finale with economy and excitement. Along the way we are introduced to a gallery of quirky characters and peculiar incidents that take on an increasingly surreal tone as the film progresses. In a bizarre twist the screenplay actually takes time out to try and penetrate the masculine defences McQuade has built up. Norris is clearly ill at ease with the moments were he must play the doting father, and his discomfort visibly increases when he must express emotion at an attempt on his daughters life and her eventual kidnapping. 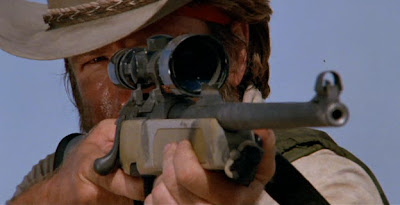 If this were not enough for Mr. Norris the token love interest provided by Lola (Barbara Carrera) muddies the waters even more. Quite literally in one utterly bizarre scene where the loved up couple copulate in the mud in slow motion while opera music plays on the soundtrack. Lola represents the incursion of domesticity into McQuade’s sparse and rustic existence. All he needs is a six pack in the fridge, his loyal wolf on the porch, and plenty of tin cans and scarecrows to use for target practice. Of course it doesn’t ring true at all, but the film deserves credit for trying to develop the subplot. If nothing else it provides unintentional hilarity for the spectator. The film does make some half-hearted and perfunctory political statements about the role of the Texas Ranger in a modern civilised society. McQuade is a retrograde presence with his unkempt appearance and his vigilante methods of meting out justice. Though this subplot, which mostly involves comedic encounters between McQuade and his superior played R. G. Armstrong, might have been a rewarding thematic territory to explore, the fact it is played for laughs clearly communicates where the sympathies of the filmmakers lie. 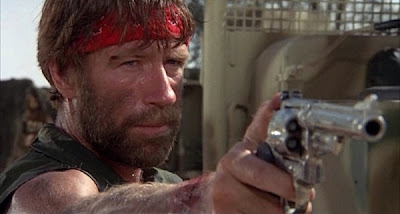 The film indicates its quirkiness further by having a wheelchair bound midget playing the leader of a Mexican crime syndicate, and McQuade driving through the desert in a supercharged 4x4. Like most westerns set on the Texas/Mexico border McQuade and his posse have to cross it for the final showdown. Borderlands normally offer an opportunity for rich thematic exploration, but Lone Wolf McQuade isn’t interested in this at all. By the time McQuade has found his old friend played L. Q. Jones killed (Wilkes breaks his neck with a twist of his boot), his pet wolf shot, a drug dealer played by William Sanderson murdered, and his daughter kidnapped the film shifts firmly into revenge mode. But not before another moment of utter peculiarity. A scene in which McQuade is buried alive in his 4x4, but manages to escape this fate thanks to the vehicles special engine. That this is all done with a straight face only adds to the enjoyment. 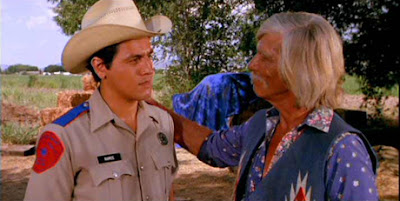 The most important question to ask of Lone Wolf McQuade is whether the final showdown between Norris and Carradine fulfils ones hopes and expectations. I’m pleased to say that the fight itself doesn’t disappoint. In keeping with the exaggerated stylisation of the film this includes Carradine in a tank and Norris in a JCB. It is marred somewhat though by the melodramatic hubris of the filmmakers who can’t resist having Lola catch a bullet for McQuade, and die in his arms, just so we can see Norris’ apoplectic rage (this actually translates to a squint of the eyes) as he regards his knitwear clad opponent. This empty-headed action movie makes no sense whatsoever, but somehow amid the rampant machismo and homo-eroticism Lone Wolf McQuade is a lot of fun. It is a shame that Norris was unable to return to this character in future projects, because there was certainly the potential for a series or franchise here.
© Shaun Anderson 2011

Posted by Shaun Anderson [The Celluloid Highway] at 21:22