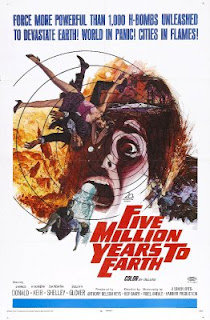 AKA:
Five Million Years to Earth


Quatermass and the Pit was writer Nigel Kneale’s third adventure featuring the eminent scientist and was transmitted on the BBC over six weeks between December 1958 and January 1959. On this occasion André Morell followed in the small screen footsteps of Reginald Tate and John Robinson. It would be a wait of eight years before Hammer got around too adapting it for the big screen, and by that time the resourceful production company had the means to realise the scope and ambition of Kneale’s original conception. Perhaps with this in mind Kneale was drafted in to provide a screenplay. Kneale had previously provided screenplays for Quatermass 2 (1957), The Abominable Snowman (1957) and The Witches (1966), Quatermass and the Pit was to be his fourth and final collaboration with Hammer. The close proximity of Kneale to the film project could only be of benefit, and the writer finally got his wish in seeing someone other than Brian Donlevy take the lead role. The role went to Hammer regular Andrew Keir, even though director Roy Ward Baker wanted Kenneth Moore. After memorable supporting turns in The Pirates of Blood River (1962), The Devil-Ship Pirates (1964), Dracula: Prince of Darkness (1966) and The Viking Queen (1967) the Scotsman was finally given top billing. Keir takes full advantage of his big opportunity and provides one of the finest interpretations of the role. 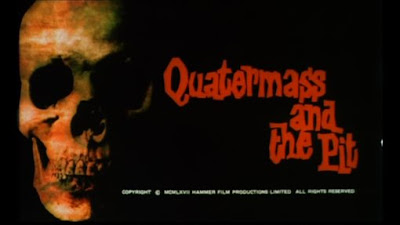 Keir brings a warmth and humanity to Quatermass without losing sight of the intellectual brilliance that sets him apart from others. In place of Donlevy’s prickly brashness, Keir brings sympathy and empathy. But in the all important clashes with the closed minds of the military and the Home Office Keir conveys his rage and frustration with aplomb, offering subtle hints to the desire that burns within him, rather than the sledgehammer obviousness of Donlevy. Keir’s is a more nuanced and elegant rendering, and one in keeping with the complexities of an intricate plot. If the film has one major weakness then it is an over proliferation of plot detail. Kneale introduces numerous concepts and ideas, and in amidst his clever explanations for occult phenomena, a lot of potentially intriguing strands of enquiry are forgotten in the climactic rush. Nevertheless Kneale somehow manages to maintain a sense of structure to the unwieldy overpopulated narrative and the story progresses in a very satisfying way. The agile and dynamic direction of Roy Ward Baker is also a contributory factor to this. Baker is rarely inspirational, but he is a very efficient and reliable filmmaker who directs in an unobtrusive and logical manner. 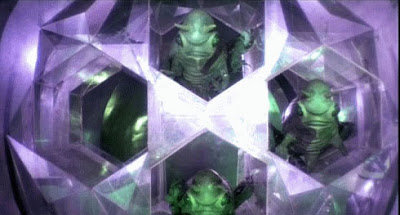 Baker makes use of some evocative London locations, but a large proportion of Quatermass and the Pit was shot at the MGM studios in Hertfordshire. In contemporaneous Hammer productions such shooting strategies often betrayed Hammer’s limited resources (take a look at Prehistoric Women aka Slave Girls (1967) as an example), but on this occasion the production design is noteworthy. The most prominent set is the interior of Hobbs End tube station. This is the site of a proposed new line, but when the excavations reveal the skeletons of ancient apes with oversized heads the archaeologists are brought in. The metallic object that is soon discovered is not an unexploded bomb as Colonel Breen (Julian Glover) suspects but a Martian spacecraft. What makes Quatermass and the Pit intriguing is that it eschews the obvious trappings of the creature feature by presenting us with insect-like Martian creatures that have been dead for five million years. Instead of a physical adversary, Quatermass and archaeologists Dr. Roney (James Donald) and Barbara Judd (Barbara Shelley) must combat the latent hysteria and aggression implanted into mankind at an early point in our evolution by a Martian civilisation desperately trying to escape their doomed planet. This is an excellent concept by Nigel Kneale and one he utilises to explain away mankind’s fear of the Devil (the Martian’s have a horned appearance) and fascination with the paraphernalia of occultism. Quatermass himself is susceptible to the telekinetic influence of the long dead Martians, and it ultimately falls to the unaffected Roney to save the day. 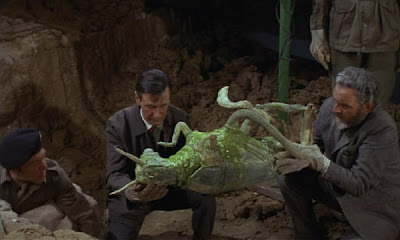 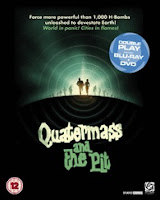 The film explores some weighty philosophical ideas, and although Kneale’s conclusions are the purist kind of science-fictional nonsense, they are still nevertheless ingenious. The exploration of dormant evil, racial memory, the psychic potentialities of mankind, and the origin of our cultural nightmares are all whisked into a fine froth by the filmmakers. The final moments represent some of Hammer’s most impressive work; a full scale panic with crumbling buildings, riots, and disturbing violence. Less successful however is the telekinetic flashback to the Martian war that led to their coming to Earth. On occasions such as these the visual effects are unable to meet the ambitions of the concept, but generally speaking the film is stylistically consistent. Keir is supported brilliantly by James Donald (who rightfully gets top billing), Barbara Shelley, Edwin Richfield and most prominently Julian Glover. Quatermass and the Pit is cerebral science-fiction, it overflows with a myriad of ideas (some of which it abandons) and it has an epic feel which for once isn’t let down by the penny pinching producers. For many this represents the pinnacle of Quatermass’ big screen adventures, and while my own preference is for Quatermass 2, this is still a major achievement in British science-fiction/horror.
© Shaun Anderson 2011
Posted by Shaun Anderson [The Celluloid Highway] at 18:03