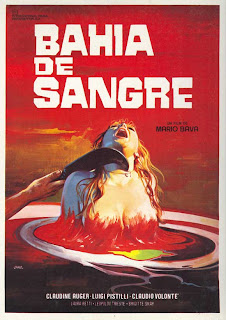 AKA:
Reazione a catena
Twitch of the Death Nerve
Blood Bath
Carnage
The Last House on the Left Part II


This multi-titled picture from Italy’s greatest visual stylist Mario Bava (it was even passed off as a sequel to the inferior Last House on the Left [1972]) has achieved an influence in the horror genre far out of proportion to its modest means of production. It provided a blueprint for less talented filmmakers like Wes Craven, John Carpenter and Sean S. Cunningham, so indirectly we have Mario Bava to blame for the cinematic excrement inflicted on the world by these amateurish filmmakers. Its status as the slasher film in embryonic form often detracts from the fact that A Bay of Blood is a ruthlessly efficient giallo that owes its own debt of gratitude to the Agatha Christie novel And Then There Were None (1939). It also emerges as a withering satire in its own right, refreshingly bereft of the self-conscious post-modern prattling of odious and arrogant films like Scream (1996). It takes a rare talent indeed to not only put in place a plot structure with obvious potential for imitation, but also to send up such a plot structure. This is by no means a one man show and although their names have largely been written out of slasher history Bava’s collaborators on the screenplay Fillipo Ottoni and Giuseppe Zaccariello deserve a mention. Indeed these three men wouldn’t have had a screenplay to work on were it not for the original story by Franco Barberi and Dardano Sacchetti. I’ve been critical of Sacchetti in the past, but the man has an undoubted gift for creating complex plots that somehow hold together and a myriad of distinctive sequences and scenarios. Its just he has the same aptitude for writing dialogue as a deaf mute. 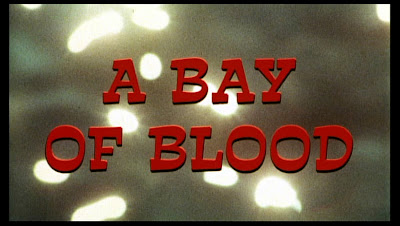 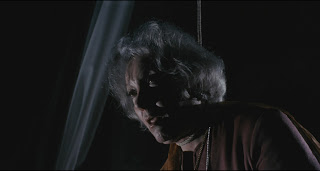 A Bay of Blood opens with a fly meeting its fate in the cool crystal clear waters of the bay. This is a symbolic and metaphoric moment that shows that even the most insignificant creatures are worthy of a second in the limelight. It also becomes a joke later on as the human characters start dropping like flies. But it also signifies that the natural beauty of the bay and the environment of animals and insects that inhabit it are ultimately doomed in the face of capitalist modernity. Before an inheritance is even mentioned and the greedy gold digging scum have turned up the film has already underscored an important theme that gets neglected by critic’s intent on describing in orgasmic detail the murders - That of the encroachment of modernity into the natural world and the ecological price that will be paid. This concern is embodied in the character of Paolo Fossatti (Leopoldo Trieste) who does not want to see the finely balanced ecology of the bay destroyed by redevelopment. But even he cannot resist the allure of killing (few characters in this film can) as he hunts specimens and consigns them to death. 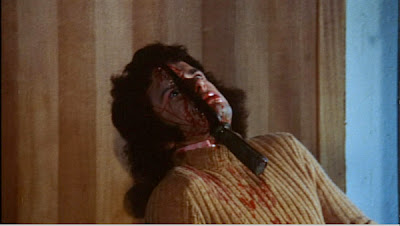 An early victim of a machete, and an example of the films impressive make up effects
﻿ 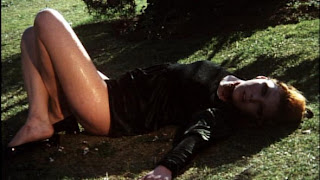 Before these concerns are fully established however the film opens in the sumptuous gothic environs of the Countess’s home. Bava who was also cinematographer on this picture is on auto-pilot here as he lights the interiors with a typical mood of sombre repose. It has to be noted though that his handling of the scenes shot on location are less successful. His decision to work with natural lighting does not benefit the visual style, and exterior scenes seem to have a constant murkiness to them. Though at times Bava does capture the gorgeous autumnal colours of the woodlands and equally beautiful sunsets. The countess is soon left hanging (the wheel of her chair spinning silently as she chokes) as Bava commits his first of several convention breaking moments - the camera pans up and reveals the face of the killer; a few seconds late the slayer of the countess lies dead on the floor having been stabbed. This audacious double murder opens the film in a very distinctive fashion, and it has to be said the film never really lives up to this bold and daring sequence. From this point onwards the film builds up its complexities and red herrings with reckless abandon. Characters are introduced with dazzling rapidity and although none of them possess any depth, their motives and machinations add further convolution to an already crowded plot. A quartet of teenage holidaymakers adds even further humanity to a bay that has suddenly become very over populated. These four characters exist purely to die. The fate in particular of the copulating couple has resonated in the annals of horror history. 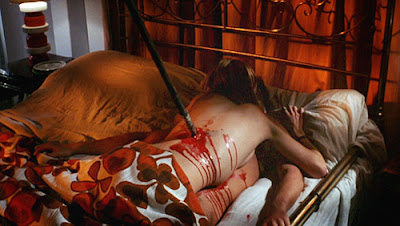 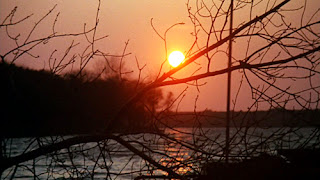 With any film in which the plot is completely constructed around murder sequences certain aspects of narrative are going to suffer. There is nobody to root for here, and instead we are asked to enjoy the special make up effects of Carlo Rambaldi in a way which can only be described as fetishistic. Bava’s camera lingers lovingly on the death and destruction (it also does a lot of pointless zooming) and it is clear that Bava intends these moments of gory carnage to be entertaining - and they certainly are. The performance of the actors even makes way for it. The authors of the film seem to be saying something about cycles of violence, and the nature of desensitising oneself to the anarchy. The final shock scene is played for laughs, but also comments on the transient and disposable nature of human life; lives which in this case have been lost purely for profit and material gain.
© Shaun Anderson 2011
Posted by Shaun Anderson [The Celluloid Highway] at 18:43