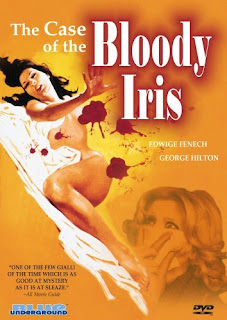 
One of the great unsung heroes of Italian gialli is screenwriter and novelist Ernesto Gastaldi. His contribution to the cycle is inestimable and his influence all pervasive. There is an argument to suggest that Gastaldi holds greater prominence than either Mario Bava or Dario Argento. The former created a visual and stylistic template from which all other gialli sprang and the latter made it a commercial proposition with the legs to succeed in other territories. But Gastaldi continued to develop and refine the thematic landscape of the form in numerous productions. His highlights as a screenwriter include So Sweet…So Perverse (1969), Forbidden Photos of a Lady Above Suspicion (1970), The Strange Vice of Mrs. Wardh (1971), Short Night of Glass Dolls (1971), Death Walks on High Heels (1971), All the Colors of the Dark (1972), Torso (1973), and The Scorpion with Two Tails (1982). This is just a fraction of his gialli output and indicates that without a doubt he was the author who returned most persistently to the cycle. He also wrote the film under discussion here The Case of the Bloody Iris and whilst it sets itself up to be not taken wholly seriously I can’t think of a better example that sums up the kitsch and camp appeal of the form. The humour is decidedly oddball, and the mysterious elements of the plot less than engaging, but the gallery of grotesque and eccentric characters that Gastaldi creates makes this a delightful way to pass an evening. 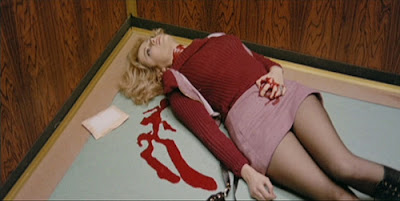 Evi Farinelli as the first victim
﻿

Set in an unnamed Italian city The Case of the Bloody Iris is concerned with the rather empty and vapid lives of photo shoot models and bland architects. Into this tacky bourgeoise world comes murder and sexual obsession courtesy of a black clad psychopath whose only concession to generic difference is that he wears brown gloves instead of black ones. His first victim is a high class whore whom he stabs to death in the elevator of a high rise apartment block that becomes the central location of the narrative. This is the first of two murder sequences in which the victim is despatched in broad daylight. The second occurs in a busy street and offers a pre-emptive echo to the murder of John Saxon in Tenebre (1982). Both are exceedingly well staged by director Giuliano Carnimeo (here working under the name Anthony Ascott) as he pours on the ubiquitous stylisations. The film opens quite sleazily - before one has absorbed the death of the slut in the lift, an erotic performance artist who challenges men to wrestling matches in a seedy private club finds herself being drowned in her bathtub. The film has surprisingly few locations - the apartment complex, the architect Andrea’s (George Hilton) office, the police commissioners’ (Giampiero Albertini) office, and a photographic studio run by a repulsively camp faggot photographer who unfortunately survives the film. The residential locations are brought to life by the sumptuous and eye watering set decoration work of Carlo Lava and Edwige Fenech steals the show in the equally eye catching costumes of Silvio Laurenzi. 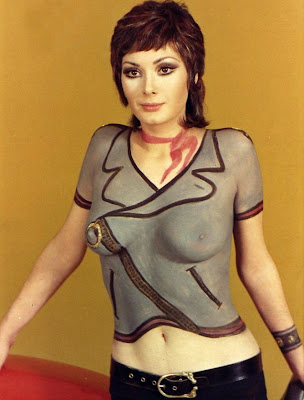 Miss Fenech plays the token gialli foreigner Jennifer Lansbury, a photo model who has taken a vow of chastity after being repulsed by the sex orgies of a new age cult she was forced into by her husband Adam. The symbol of this cult is an iris, but this is just one of numerous red herrings. The sexual obsession of Adam leads him to stalk his estranged wife, threaten those who speak to her, and culminates in attempted rape. Adam is too obvious a suspect and Gastaldi’s screenplay soon despatches him. This offers something of a balance to the retrograde misogyny of the other murders. Adam is a fun character though, and his place in the narrative does offer an enjoyable flashback to one of his new age orgies. When Jennifer and her ditzy friend move into the apartment of the murdered girl this acts as a red rag to a bull and soon Jennifer is being stalked by multiple weirdo's. The psycho-sexual underpinnings of the plot are handled in a way that can only be described as flippantly. Much of the mockery comes from the sharp tongued commissioner who never misses an opportunity to explore the kinkiness of those he investigates. He is also a stamp collector with a long suffering sidekick; I very much enjoyed the interplay of these two characters. But beneath the jokes and mockery the cops are unsurprisingly useless, and spend the film chasing the wrong man. It is up to Jennifer to unmask and confront the killer.

In addition to the above characters we have an overly masculine and threatening dyke, a retired professor who plays the violin until all hours, and a dotty old bitch who buys horror magazines for her deformed son and spits out hilarious insults at Fenech’s attempts to be a prim and proper lady. Her decision to wear ties and jackets also gives her character a frisson of lesbianism which unfortunately the film doesn’t develop. Despite all the tension there isn’t actually any lesbian encounters to speak of. George Hilton does a reasonably proficient job as an architect with a phobia of blood (the result of a car accident in which he watched his parents perish), but I found his character to be a little dull, and aside from his obvious wealth I’m not entirely sure what Jennifer sees in him. The deformed retard son has more personality. This is a totally formulaic giallo, but in its own way very weird. The overall thematic concern of the corruption of innocence kind of gets lost in the kitsch shuffle, and I found myself admiring the fine score by Bruno Nicolai more than anything in the film. This is a very disposable gialli, but still manages to be hugely entertaining in a bizarre and slightly oddball way.
© Shaun Anderson 2011
Posted by Shaun Anderson [The Celluloid Highway] at 22:02