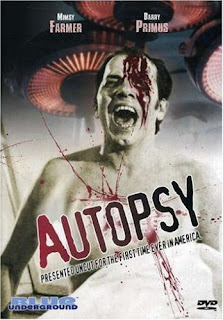 AKA:
Macchie solari
The Magician
Sun Spots
The Victim
Tension


Released under the more appropriate original title of Macchi solari which translates as Sun Spots writer/director Armando Crispino’s gialli is a very peculiar little film. Although Crispino only directed nine films he had previous knowledge of the form with the dour and dreary The Etruscan Kills Again (1972). In light of the other pictures that make up Crispino’s filmography Autopsy has to be considered his best film. But unfortunately that isn’t really saying much. This film is elevated slightly by a competent cast that includes Mimsy Farmer (a gialli semi-regular by this point), television actor Barry Primus, and the ever watchable Ray Lovelock sporting his trademark beard. Behind the camera the contribution of composer Ennio Morricone is vital. Morricone’s weird and eerie music that makes use of whispered voices and a repeated theme that is subtle and plaintiff does much to instil a sense of the unnatural. It is by no means the maestro’s best work, but it gives Autopsy a touch of class it badly needs. Crispino is further aided by the beautiful lighting and cinematography of Carlo Carlini who captures the stark and stifling heat of Milan and juxtaposes it with some wonderfully lit night time sequences. Crispino himself is a somewhat pedestrian director, but even he is unable to undermine what is an astonishing opening ten minutes. 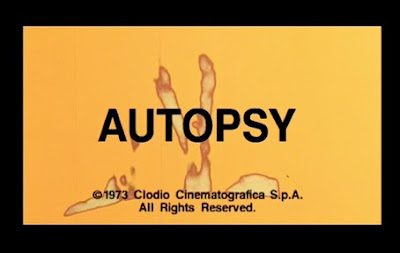 This is one of the few giallo films that base its premise on an urban myth. In this case that solar activity and more specifically sunspots can induce suicide. The film opens with grainy library footage of solar flares, an image the director returns to repeatedly throughout the film, especially after moments of death and high anxiety. It becomes a symbolic image, but for what I’m not entirely sure. It does at least afford Crispino the opportunity to open his film with a stunning montage of multiple suicides. The most unsavoury of which is a man who has shot his children before turning the gun on himself. Apart from this montage the screenplay pretty much drops the notion of sunspots causing mass suicide, only referring to it fleetingly when Simona’s (Mimsy Farmer) thesis is mentioned. To his credit Crispino has another trick up his sleeve and he soon follows the opening montage with lingering interior shots of a busy morgue. We are privy to pretty explicit images of autopsy action - brains slop about, bodies lay open in full glory, naked dead flesh abounds, all of it repugnantly undignified. When Simona starts to see corpses sitting up and grinning we are given our first indication of her brittle state of mind. When the corpses then start fucking we are given our first indication of her sexual repression. 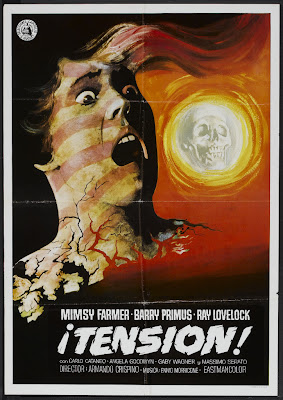 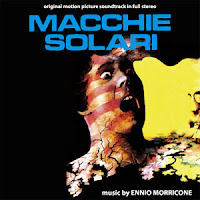 The film never manages to live up to this odd and hallucinatory opening few minutes. Instead the film degenerates into a depressingly formulaic mystery revolving around wills, inheritances, and blackmail. Nevertheless this is still the only giallo to the best of my knowledge that has copulating corpses. The screenplay does spend a lot of time developing Simona, and she becomes all all too rare female character that has depth. She is an intellectual (though she acts incredibly dumb), morbid, morose, and slightly unhinged, and much of this seems to come from an unhealthy infatuation with her father Lello (Carlo Cattaneo). This hints at a disturbing incestuous subtext, but in reality Simona is projecting her sexual frustrations onto her father as she struggles with the jealousy of the myriad young lovers he seems adept at getting. The actual mystery revolves around the faked suicide of an American girl and the attempts of her brother Paul (Barry Primus) to bring the culprit to justice. Paul is another damaged soul, a former racing driver who retired after an accident in which several bystanders were killed. He atones for this by adopting the cloth of the Catholic Church and sermonising in Milan. This is one flaky padre though - prone to fits, and full of aggression and violence. However he is far too obvious to be a true suspect, and Simona latches onto him like a new father figure. 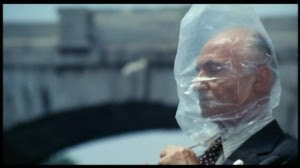 Edgar (Ray Lovelock) is a more conventional gialli character - a photographer and artist, a wealthy wine sipping dilettante, but even he has an interest in deviant pornography. Interestingly much of Autopsy’s grisly nature is communicated through still photographs. Simona has countless images of crime scenes, eviscerated corpses, and medical anomalies. Crispino frames these images lovingly and slowly builds an atmosphere which is quite unique for a giallo. The film is notable for its sensation of paranoia and disorientation, but as a work of suspense and deduction it is tepid. The set pieces are few and the reveal of the killer is unusually downplayed, almost as though it’s a minor plot point that didn’t merit further attention. The film is being pulled in opposite directions. There is just the slightest evidence here of a very innovative film indeed, but it doesn’t quite have the courage of its convictions in separating itself from the cycle it sits within.
© Shaun Anderson 2011
Posted by Shaun Anderson [The Celluloid Highway] at 15:40