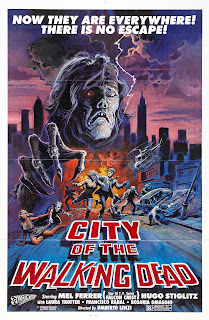 aka:
Incubo sulla citta contaminata
City of the Walking Dead


Like a great number of his contemporaries working within the blood soaked environs of the low budget/exploitation arena in 1970’s Italy, Umberto Lenzi is a director with a competent degree of generic utility. Lenzi is a journeyman filmmaker, a safe, if somewhat undistinguished pair of  hands. Lenzi offered some interesting and colourful contributions to the giallo genre which included Orgasmo (aka Paranoia, 1969), So Sweet…So Perverse (aka The Spider, 1969), and the beautifully titled Seven Blood-Stained Orchids (1972). His major contributions to the horror genre were three mindless and moronic entries into the cannibal subgenre - Deep River Savages (aka Man from Deep River, 1972), Eaten Alive! (1980) and the inexcusable cinematic excrement Cannibal Ferox (aka Make them Die Slowly, 1981). The result of these films is a cinematic legacy marked by sadism rather than proficiency, films lacking personality and any sense of stylistic coherence. A preponderance to rely on shock tactics has perhaps endeared Lenzi to cult film enthusiasts, but it takes very little effort to see that there is no depth to Lenzi’s cinematic offerings.

Appearing in between Lenzi’s cannibalistic double is one of horror cinema’s dumbest films Nightmare City. An emblematic film lacking any sense of narrative coherence. It doesn’t even possess the dream like quality that so many fans of Italian horror fall back on to explain the fact that the films make no sense at all. It suffocates under its own blanket of imitation - offering up a sub-Romero socio/political message amid a backdrop of sub-Fulci gore and violence. The feeble attempts to emulate the wondrous gore of Fulci fail due to a less than professional approach to make up effects. The unconvincing zombies create a snowball effect, and pretty soon the films allegorical statement about nuclear power becomes equally unconvincing. The power plant sequences are impressively staged, and Lenzi gets much visual mileage out of this stark industrial location, but Lenzi and his team are clearly itching to get away from the thematic substance of the film and get down to the serious business of misogynistic imagery. There are more topless shots than zombies, and Lenzi is rigorous in his determination to present the deaths of female extras in as much detail as possible. The few male victims we see are vanquished quickly and quietly and without fanfare. These are zombies with an unerring interest in killing women. 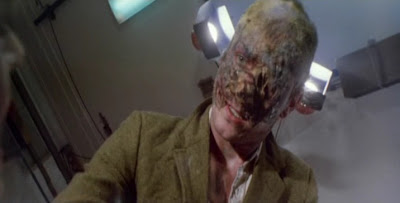 It comes as no surprise that the screenplay was cobbled together by no less than three scribes. In this case Antonio Cesare Corti, Luis Maria Delgado and Piero Regnali. A mulititude of writers is normally the first sign of disharmony and incompetence. Its clear to me that none of these individuals are familiar with the term characterisation. The dull bearded lead character Dean Miller (Hugo Stiglitz) goes from a feckless and weedy television journalist to gun toting action hero all to easily and conveniently. His wife Dr. Anna Miller (Laura Trotter) undergoes an even more bizarre character transformation. She starts the film as a bastion of scientific rationality, offering up juvenile philosophy and ends it as a mindlessly superstitious imbecile ranting about vampires! The silliness and stupidity steadily builds along with an increasing hysteria. At least the hysterical tone is in keeping with a society suddenly beset by radioactive zombies, but the stupidity and subsequent contempt for the audience is unforgivable.

But even utterly inept and useless horror films such as this manage to have a few redeeming aspects. The zombies for example are particularly energetic, they can run, and behave with a mobility unheard of at the time for zombie films. This is the earliest example I have seen of this (please let me know if there is an earlier one) and is surely an influence on 28 Days Later (2002) and the remake of Dawn of the Dead (2004). Lenzi does succeed (hopefully by design rather than accident) in creating a palpable mood of despair and nihilism. A cynical attitude to the authorities and the military aids this atmosphere of impending doom. The closure of the film may surprise some first time watchers, but to me it was utterly pointless and devoid of justification. It was done a lot better in Ealing Studio’ masterful Dead of Night (1945) where it had meaning and purpose.
© Shaun Anderson - 2010
Posted by Shaun Anderson [The Celluloid Highway] at 15:22