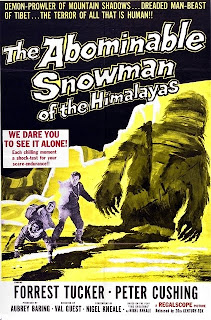 aka:
The Abominable Snowman of the Himalayas


Hammer Film Productions quaint 1957 effort The Abominable Snowman holds a position of curiosity within the esteemed history of Britain’s greatest purveyors of gothic horror. Like all films of interest it tends to split opinion within horror circles. To those who perhaps prefer their horror more subtle than visceral it is seen as an intelligent human drama dedicated to a message of ecological awareness. To those less attuned too, or appreciative of, restraint and unobtrusiveness, it is viewed as slow, talky, and boring, with a ‘monster’ that appears all to briefly. Perhaps part of the problem for The Abominable Snowman is that even within the context of Hammer’s production roster it was considered anachronistic. Although it was made before The Curse of Frankenstein (1957), it wasn’t actually released until after the wicked Baron Frankenstein’s morally reprehensible experiments had struck an unsuspecting public. The black and white photography, token American actor, and the collaboration between director Val Guest and writer Nigel Kneale, belonged to a phase that Hammer were now leaving behind in favour of a colourful mid-European gothic netherworld in which the forces of good and evil were to do battle under the watchful eye of Terence Fisher. It was rushed out to capitalise on the newly discovered marquee status of Peter Cushing, a status which would have been unpredicted when the film was being made. Although Cushing controls the film, his domination is increased more with the knowledge that from the time the film was produced to when it was released, he had become a star.

The Abominable Snowman marked the third and final collaboration (if one can call it that) between Val Guest and Nigel Kneale. The screenplay by Kneale was an adaptation (though I don’t think a vast amount would have been altered) of his own story The Creature which had aired as a mini series on the BBC. Hammer were no doubt hoping to make it third time lucky with a Kneale/TV based property - following the success of The Quatermass Xperiment (1955) and Quatermass 2 (1957). Unfortunately the screenplay by Kneale is dramatically unsatisfying, the ecological underpinnings of the narrative come through with crystal clarity, but a sense of pace and action, of dramatic urgency, is left to flounder somewhat. Val Guest is a director who brings with him a sensibility of realism, his films are often gritty, and his talents have always seemed best deployed in films where the plot is driven by action…not by dialogue. This film seems very ill suited to Guest who was much more comfortable with later war themed productions such as The Camp on Blood Island (1958) and Yesterday’s Enemy (1959). Even his science-fiction/horror entries in the Quatermass series have a sense of realism unusual for the genre. The Abominable Snowman lacks the editorial dynamism necessary for a film that is heavy on static scenes of dialogue exchange. Guest does very little with the camera, and even on the rare occasions when the director is called upon to mount an avalanche the result is unconvincing. 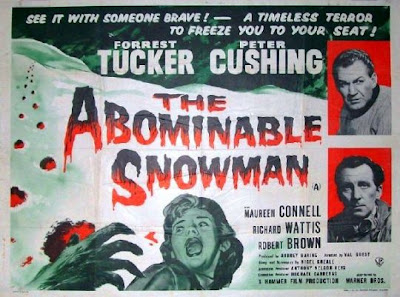 Dr. John Rollason (Peter Cushing) is a prissy botanist whose concern for the rare fauna and plant life of a desolate tract of the Himalayas is merely a front for his own desire to seek out the mythical Yeti. This causes him much marital strife as his wife Helen (Maureen Connell) is dead set against the idea. The opening exchanges are located in an impressive monastery setting, and production designer Bernard Robinson excels on the Bray Studios lot in creating eerie cloisters and ill lit corridors. When the obligatory American expedition turns up led by Tom Friend (Forrest Tucker) Kneale’s attitude towards America becomes clear. Noisy, brash, and crass, the Americans are repugnant loudmouths with no respect for Himalayan customs. Tom Friend becomes the antagonist and not the Yeti, this is something of a surprise, and perhaps an error. Naturally Friend is not at all concerned with the Darwinism and ideology of scientific discovery that motivates Rollason - he is a capitalist, and intends to exploit the Yeti as a personal gold mine. This opposition of world views between Friend and Rollason creates much of the tension in the film, and Kneale’s screenplay does offer strong characterisation for both actors to explore. But the view of American’s as motivated only by profit and the British as motivated by only the noblest of reasons is of course retrograde, but it adds much humour and enjoyment to the film. Fortunately all the Americans die, which is a justifiable punishment for all their hollering, hooting, and general vileness.

The Yeti are a presence that haunts the film off screen, and Guest does extremely well in conveying their intelligence through sound and judicious camera angles. We do see them briefly at the end, but the camera is far more interested in Cushing’s look of awe struck terror. Many of the sets were built at Bray, but Hammer also shot some sequences at Pinewood Studios, and location shots of the Pyrenees Mountains, which are inserted clumsily between obvious studio bound scenes. The harsh snowy conditions, howling wind, and inescapable mountain vistas creates an impressive sense of claustrophobia and isolation. The film has a creeping tension which is commendable. A sub plot involving Rollason’s wife commencing her own expedition is utterly pointless, as are numerous scenes of padding back at the monastery. Almost every aspect of The Abominable Snowman is ill fitting, yet thanks to a strong central performance and some excellent production design the whole thing somehow works.
© Shaun Anderson - 2010
Posted by Shaun Anderson [The Celluloid Highway] at 14:00