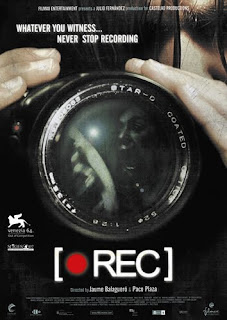 
The history of Spanish horror is littered with compromise and censorship. In the 1960’s an all too brief liberalism towards the genre opened the way for filmmakers such as Jess Franco, Paul Naschy, Amando de Ossorio and Eloy de la Iglesia to explore the creative potentialities of horror, but this golden period wasn’t to last long. Horror came under increasing scrutiny from the imperious eye of the state, to an extent that the history of Spanish horror cannot be written without an awareness of the political culture of the times. This has given Spanish horror an allegorical dimension that has never really left it, a political and social consciousness that has endured up until the present day. [REC] is an excellent example of a horror film distilling social and political anxieties, but one which uses the signifiers of the zombie and reality television in order to give it trans-national appeal. 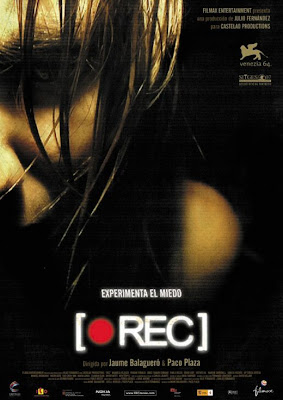 It is always heartening to see a European horror film teach Hollywood a thing or two about creating tension and atmosphere, an ability that American filmmakers seem to have forgotten. [REC] emerged during a period in which a pseudo-documentary approach to the material was gaining momentum. George A. Romero had attempted to use this form in Diary of the Dead (2007), but even a cursory viewing of [REC] will illustrate the extent to which Romero’s ‘Dead’ series is hopelessly out of tune. Other notable films to use this form were Paranormal Activity (2007) and Cloverfield (2008). These were empty headed and moronic exercises with little redeeming value, but [REC] possesses an intelligence and an attitude which makes it easily the most effective of these faddish pseudo-documentary movies. 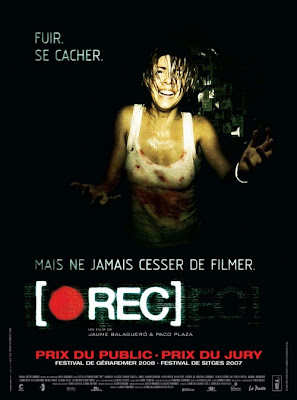 An early and notable statement made by the filmmakers illustrates the desperate need on the part of the media to record or document something out of the ordinary. If this means the media must act as a manipulator in order to secure extreme images then so be it. Therefore Manuela Valasco as the reporter Angela has a thankless task. Her burning desire for action and risk beyond the walls of a fire station, and her eagerness to capture life and death decisions makes her a thoroughly irritating and dislikeable protagonist. Once Angela and her cameraman Pablo (Pablo Rosso) are trapped in a downtown apartment block any fear they might have is soon assuaged by the prospect of filming something unique and exclusive. This theme is developed with persuasion and economy and paints a very unflattering picture of the depths that television crews will plumb to capture something exciting for a jaundiced audience. This naturally leads the film into the minefield of truth and reality, of the validity of the documentary form as an index of truth. This is all brought to life within a confined and claustrophobic space that is among the most evocative settings in modern horror. 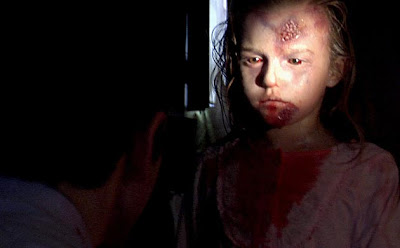 Unsurprisingly the apartment block and its inhabitants functions as a microcosm of society. We therefore bear witness to a culturally diverse community in which racial tensions simmer just below the surface. We see that in a moment of crisis people are more likely to drift apart than cooperate, and this lack of collaboration allows fascistic attitudes to develop. The network of apartments are given a labyrinthine quality and are used sparingly, and its clear the filmmakers are highly conversant with the expectations of the horror genre. Sightings of the infected zombies are reduced to a minimum, so when they do suddenly appear from off screen the impact is increased. This is in marked contrast to other modern zombie films in which the characters cant move for the undead. Much of the tension and scares are created through the simplest and cheapest of means; framing, composition, camera angles. This works so well because the filmmakers choose to remove music from the film. It is in this approach to sound design where the film reveals some innovation that American horror producers could take heed of. The louder something is, doesn’t necessarily mean its scarier. 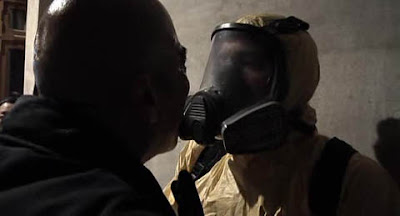 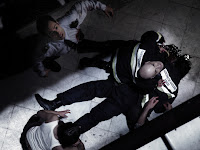 Whilst the sight of marauding zombies passing a blood infection on to people is nightmarish enough, the truly terrifying aspect of the film is the response of the authorities to the crisis. This is a government and military that clearly knows more than its letting on, and raises the question of covert military experiments. This is not new for the horror genre, but the implacable and emotionless response of the authorities is unusual. In other areas however the film is not a success. I personally do not enjoy the puke inducing camera movements of these ‘pseudo documentaries’ - I’m more likely to throw up from this, than any horrific content the film might have. There is scant occasion for rich characterisation, with speaking parts acting merely as ciphers for a political or cultural position, and the dialogue itself sounds as though its been written by a baboon with learning difficulties - though that might just be the subtitling on my copy. Despite these and other flaws [REC] genuinely succeeds in creating a sensation of lurking terror, which reaches an unbearable crescendo when our duo of reality TV imbeciles are forced to utilise the night vision facility of the camera. Instead of absorbing the lessons of [REC] Hollywood responded with Quarantine (2008), a dire and depressing remake, further proof of the struggles that horror is facing in America.
© Shaun Anderson - 2010
Posted by Shaun Anderson [The Celluloid Highway] at 12:17