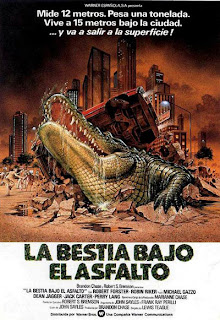 
By accident rather than design I seem to be watching quite a few ‘Revolt of Nature’ horror films of late, and this production from 1980 is easily one of the most enjoyable. The 1970’s was without doubt the pinnacle of this durable subgenre thanks in part to the commercial success of Steven Spielberg’s Jaws (1975), but also to a wider social consciousness about the ecological and environmental impact of industrial capitalist endeavour. These worries fed into a general culture beset by paranoia and the film industry was swift in capitalising on this trend. A number of animals and insects stepped up to the plate to challenge human supremacy - from bears in Grizzly (1976) and Prophecy (1979) to worms in Squirm (1976) to wasps in The Swarm (1978) and bees in…wait for it - The Bees (1978) mankind was not safe from a natural world hell bent on avenging a variety of abuses and claiming dominion of the earth. By the end of the decade the commercial steam was slowly running out of this subgenre due in no small part to the cheap rip offs produced in Italy that masqueraded as American productions. Alligator appeared at a time of diminishing returns but still possesses an energy and wit which is refreshing to this day. 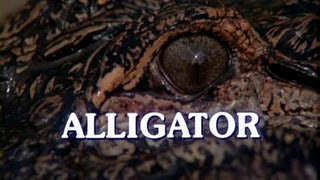 The premise of Alligator is based entirely on urban myth - in this case that the sewers of major American cities contain giant alligators flushed down the toilet by consumers unfit or unwilling to deal with the rapacious reptile. This is an urban myth that addresses the madness of consumerism and fad purchases, but unfortunately the film opts to make little of this intriguing thematic subtext. The alligator who is named Ramon by the small child who obtains it grows to abnormal proportions due to a steady diet of domesticated pets which have been injected with an experimental growth hormone and dumped in the sewers. Ramon has thus far been abused by the forces of consumerim and the unethical capitalist enterprise of a large pharmaceutical company. He spends the remainder of the film punishing those who have placed him in this predicament. That Ramon is able to target those who are directly responsible for his genetic development is just one of a number of mindless (but nevertheless enjoyable) liberties taken by the writer John Sayles. The other includes the amazing ability Ramon possesses for evading the authorities and quietly slipping away after scenes of immense carnage. There is a child like glee though about the way Ramon indulges his own greed for human flesh by dining on a corrupt major and a hypocritical buisnessman. The film is totally clear on where its sympathies lie. Unfortunately a lot of the symbolic value of Ramon smashing up cars and shop fronts is lost amid clumsy plotting and a whole raft of superfluous characters that drift in and out of the film in order to justify the requisite clichés which Alligator strains under. 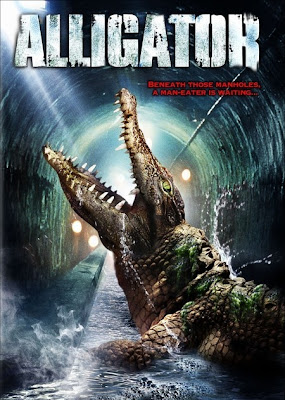 Lewis Teague’s direction is rarely inspirational and like his later horror films Cujo (1983) and Cat’s Eye (1985) is blandly realised. But the film does have one or two set pieces that lift it above the detritus. Ramon exploding through the concrete street is impressive, even if the beast is an unconvincing model. Ramon gate crashing a birthday party is a particular highlight, and it is a sequence in which many of the thematic and symbolic points of interest are distilled. Robert Forster is capable and fun as a dishevelled and down at heel cop desperately trying too atone for a partners death in the past, and a cameo by Henry Silva as a big game hunter provides much needed humour. These characters are clearly one dimensional stereotypes, but the actors are clearly enjoying the prospect of playing up to the conventions. The film has a tongue in cheek tone which is both admirable and invigorating, and the spatial potential of claustrophobic sewer systems with the ever present sound of dripping water adds a great deal of atmosphere to the piece. An enjoyable film which is able to transcend its limitations (poor model work, plot inconsistencies) to emerge as a minor classic in the ‘Revolt of Nature’ subgenre.
© Shaun Anderson - 2010
Posted by Shaun Anderson [The Celluloid Highway] at 20:37