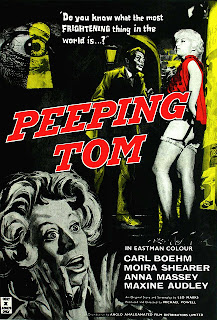 aka:
Face of Fear
Le Voyeur


When opening a discussion on Michael Powell’s highly divisive British psychological horror film Peeping Tom (1960) it is very easy to get drawn into a reductive debate about the films critical reception in the United Kingdom. For horror fans the film has become something of a cause celebre. The one clear cut occasion when the middle class critical establishment got it wrong and were proven by time to be inadequate to discuss cinema. For those unaware of the films critical reception, suffice it to say it caused a scandal. The film was unanimously panned by middle class and right wing bluster - the same idiots that had become hysterical over imported horror comics and the productions of Hammer. Often the rhetoric and abuse of the reviews were far worse than the actual content of the films. The resulting furore had dire consequences for the films gifted director who found it increasingly difficult afterward to mount a production the UK. Powell would suffer a type of unspoken blacklisting and was forced abroad to make films that became increasingly sporadic during the 1960’s. 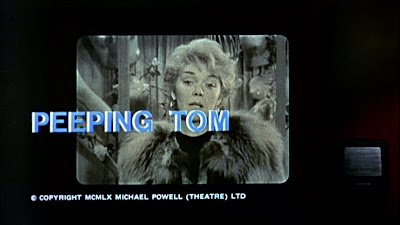 This was an undignified end for one of British cinema’s most innovative and visionary talents. Along with his production partner and co-director Emeric Pressburger, Powell had been responsible for some of British cinema’s most unusual and colourful productions in the 1940’s and 50’s. The films overflowed with a warm sensuality that was reflected in the beautiful and glowing cinematography of Jack Cardiff. In films such as The Black Narcissus (1947), The Red Shoes (1948) and The Tales of Hoffman (1951) the repressed stiff upper lip of post war Britain relaxed amid a lush universe in which sexual desire, fantasy, imagination, and whimsy were vital ingredients to alleviate the gloom of rationing and rebuilding. Powell however was no stranger to critical indifference, his films often being dismissed for a failure to address social concerns and their lack of realism. 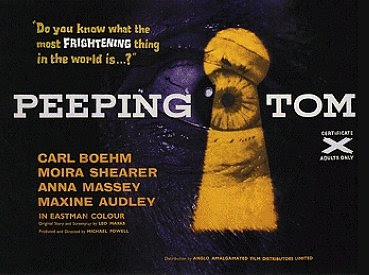 Peeping Tom might have been treated as an exceptional event at the time, but in truth its arrival in 1960 would not have been a surprise if the critics had paid more attention to two other horror films Anglo-Amalgamated had produced. Horrors of the Black Museum (1959) and Circus of Horrors (1960) preceded Peeping Tom and its instructive to view them as a kind of thematic trilogy. All three films are highly self-reflexive, all three have an overriding concern with a sadistic or voyeuristic masculine gaze, and all three are concerned with the process of spectatorship. They are also linked visually and stylistically by their use of Eastman colour, and their tendency to avoid wide angle compositions in favour of a restricted frame. In Peeping Tom this use of Eastman colour takes on metaphorical importance; the sickly and washed out hues and tones of the Eastman process operating as a metaphor for the malaise and perversity of the world at large. 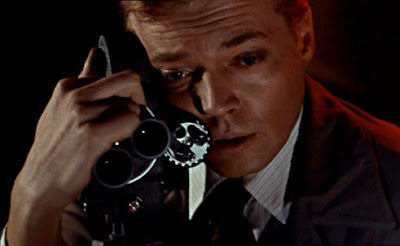 Powell conjures up a grimy and disordered world of pornography, immorality, prostitution and casual acts of murder. This is a world far removed from Hammer’s lustrous gothic never-land, and the images have an insidiousness that is not alleviated by beautiful art direction and production design. Powell invests in his serial killer Mark Lewis (Karl Boehm) a depth hitherto unseen in cinema for a psychopath. He uses the emotional potential of cinematic devices to illicit sympathy for his perverted killer. This is achieved by Boehm’s delicate performance which emphasises Mark’s awkwardness, shyness, and introversion. His German accent makes him an outsider, and he appears more feminine than masculine. Unusually for a horror film of this period Powell returns us to Mark’s childhood in flashback and we discover he endured wicked psychological experiments at the hands of a father who filmed his every reaction. Boehm’s Germanic status adds all kinds of interesting layers and implications as does the decision by Powell to cast himself as Mark’s cruel father. 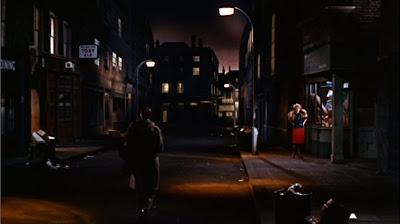 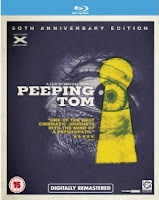 At every turn the filmmakers de-eroticise the sexual elements of the film - this is in no way an exercise in mere titillation. The hookers we see are faded, clapped out, and garishly made up - but the makeup does not disguise their moral decay. The only sexual relationship in the film that achieves any amount of passion is the one that Mark has with his camera. It’s importance as murder weapon, device of spectatorship (and the implications therein) and substitute for Mark’s lack of sexual confidence makes it as much the main character of the film as Mark. Peeping Tom is a casebook for psychoanalytical study, and overflows with the sort of Freudian touches that would keep many dull academic occupied. The critics felt Michael Powell wasn’t playing fair by utilising cinema in this way, they didn’t wish to sympathise with a cold blooded German killer who gained sexual pleasure from filming the precise moments of his victims deaths. He watches it back as well, which tells you what John McNaughton had in mind when he made Henry: Portrait of a Serial Killer (1986). Powell might not have been playing fair, but who needs fair play when the result is a landmark in both British and horror cinema.
© Shaun Anderson - 2010
Posted by Shaun Anderson [The Celluloid Highway] at 14:52