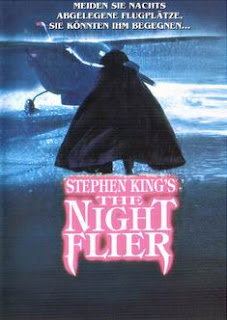 aka:
Stephen King's The Night Flier


The short story The Night Flier by Stephen King first saw the light of day in the 1988 horror anthology Prime Evil: Stories by the Modern Masters of Horror which was edited by Douglas E. Winter. King later chose to include the tale in his patchy 1993 collection Nightmares and Dreamscapes. It remains one of King’s pulpiest and most self aware stories, full of the usual post-modern intertextual tricks one has become accustomed too in his work. However it does cleverly combine vampirism and sensationalist journalism and offers an implication that the two are closely linked. Generally speaking King’s short stories do not make for good movies. The shorter form is more usefully suited to the anthology television series format - but as this type of programming has pretty much died a death in the last twenty years we have to endure heavily padded movies. The Night Flier is no exception and does drag and meander along, but fortunately it never does so aimlessly. There are scenes of repetition (the journalist Richard Dees in unconvincing flight for example) and there one or two notable scenes that do not further the narrative at all (Dees encountering a car accident and ghoulishly moving the corpses in order to get a better photograph). This scene is particularly superfluous because by this point the film has rammed it down our throats that Dees is a rotten bastard. 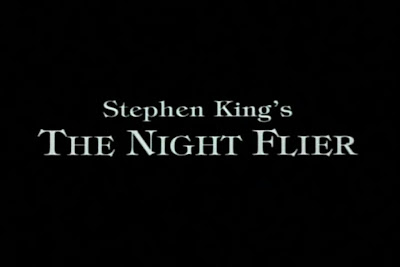 Nevertheless Dees is a marvellous creation - and easily the vilest and most repugnant protagonist to feature in a King film. In the short story he is bitter, cynical, and burned out, but in the capable hands of Miguel Ferrer he takes that extra step into the territory of total sleaze. Dees has few redeeming qualities, which does at least make a number of his scenes very amusing. Unfortunately it also makes it nigh on impossible to identify with or sympathise for the character. Dees is a reporter and photographer for a low brow periodical called Inside View. It features stories of alien abduction, freakish behaviour and real life atrocities. This is investigative journalism of the lowest form and the sadistic editor (Dan Monahan) is never happier than when he is winding Dees up and seeing his staff compete for the front page. Dees is fading and is under pressure to live up to his previous reputation and in a last desperate gambit heads out on the trail of a serial killer whose getaway vehicle is a black Cessna Skymaster. The Night Flier as he becomes known assumes the name of Dwight Renfield and Dees’ journey through the skies and back to the front page leads him to a tragic final encounter with the enigmatic vampire. 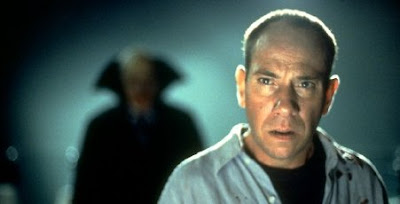 The use of desolate and eerie airfields in the back of beyond as the locus for a series of gory set pieces adds a great deal to the film. The screenplay by Mark Pavia and Jack O’ Donnell maintains Renfield’s mystery throughout, and avoids the temptation to offer acres of peripheral back story. However he does raise numerous questions that the screenplay leaves unanswered. We get a hint of his origins when Dees discovers a faded photo album in his Cessna , but whilst this indicates the age of Renfield it does little else to make his present existence understandable. The result of this is that a subplot involving Dees competing with idealistic young reporter Katherine Blair (Julie Entwistle) becomes the most interesting aspect of the narrative. Blair is the only character that undergoes any kind of development - in this case from wide eyed rookie to hard edged cynic. Her inheritance of the mantel left by Dees at the conclusion suggests a life trajectory not dissimilar to the man she learns to despise. 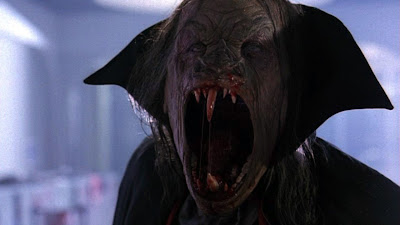 The final showdown between Dees and Renfield in an abandoned airport is the films highlight. In the best scene in the film he bumps into the vampire in a bathroom , and watches in horror as the invisible creature urinates blood, a scene which also offers a novel twist on the lack of reflection myth. The film ends with a major plot twist that is not altogether unexpected, but like most twists it raises questions that the film is clearly not willing to answer. This is a low budget feature, but the set piece sequences are imaginatively staged and by and large well shot. There is some rather unconvincing and unwelcome CGI, but aside from this the film looks far slicker than it deserves. Ultimately though the whole endeavour is undone by a central vampire monster that turns out to be the least interesting aspect of the film.
The Celluloid Highway's 100th Film Review.
© Shaun Anderson - 2010
Posted by Shaun Anderson [The Celluloid Highway] at 19:38