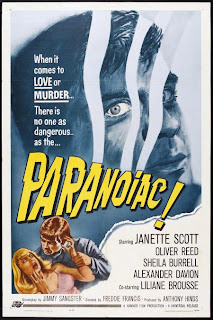 
Distributors have been slow to mine the archives of Hammer for potential high definition blu-ray releases. To date we have had only three; the dual edition package of Vampire Circus (1972) courtesy of US distributor Synapse, UK distributor Optimum’s dual edition package of Quatermass and the Pit (1967) and Eureka’s presentation of Paranoiac. The latter was the first Hammer title to see the light of HD as Eureka took early advantage of their relationship with Universal (future HD releases from this label include Silent Running [1972], Touch of Evil [1958], Repo Man [1984] and Two Lane Blacktop [1971]). Although Paranoiac was not the most obvious title for the champagne treatment, it was the first time the film had enjoyed a digital release in the UK. Unfortunately it isn’t a particularly good film. It is boring, long winded (despite only running for 81 minutes), predictable and hopelessly riddled with generic clichés. These are major shortcomings, but in its favour the film looks beautiful. The monochrome cinematography of Arthur Grant is stunning, and totally justifies the decision to release this title in HD. That the film is so gorgeously shot is not a major surprise when one sees the name of cinematographer extraordinaire Freddie Francis as director.

The major weakness of Paranoiac then lies with a feeble and desultory screenplay from Jimmy Sangster, who was hardly stretching his talents with this derisory offering. This was Hammer’s fourth monochrome psychological thriller, following The Snorkel (1958), The Full Treatment (1960), and Taste of Fear (1961), and already the cycle was wearing thin. I have to confess to not being a big fan of these films, Taste of Fear being the only one that actually measures up to the two films (Psycho [1960] and Les Diaboliques [1955]) that were being emulated. The rest are derivative in a creatively unsatisfying way, and are little more than cut rate Hitchcock. However they did possess two things that make them historically interesting. The first relates to technical accomplishments and the centrality of acting performances…Susan Strasberg in Taste of Fear, Oliver Reed in Paranoiac for example. The second and more interesting aspect is their parochial and provincial Englishness. Paranoiac is a very small story, set in a small village on the Dorset coast within a relatively isolated community. It is a community in which reputation is paramount, none so more than the good name of the Ashby family, who are the requisite village aristocrats. I get the distinct impression Mr. Sangster wasn’t too keen on the upper classes! His aristocratic creations are uniformly damaged and dysfunctional, but he takes this to an extreme in the shape of Simon Ashby (Oliver Reed). 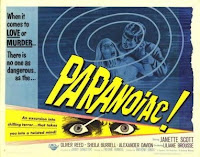 Simon is a boorish lout, a womanising psychopath with a healthy contempt for all human life (ask the nurse!!). He is determined to prove his sister Eleanor (Janette Scott) insane in order to cash in on her share of an inheritance bequeathed to them by their dead parents. This a tale of warring siblings and greed, and it is conducted largely through dialogue, and largely in lavish drawing rooms and studies. The fly in Simon’s ointment comes with the arrival of his brother Tony (Alexander Davion) who was believed to have committed suicide because he was unable to live with the loss of his parents. Simon and his cadaverous Aunt Harriet (Sheila Burrell) are convinced the young interloper is an impostor. Simon’s reasons for thinking this have strong foundation - he murdered his younger brother and bricked him up behind a pipe organ! A certain queasiness is introduced with a dual layer of incest - Eleanor to Tony (though it turns he is not related) and Aunt Harriet to Simon. Simon clearly plays on the affections of his Aunt and delights in manipulating her to his will. 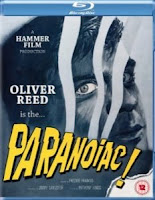 The minimal settings (most of the film is set in a rambling gothic mansion) adds a certain degree of paranoid claustrophobia, but when the film moves beyond this space it becomes altogether more interesting. The two most impressive sequences involve a car dangling over a cliff edge (the tumultuous waters below offering a metaphor perhaps for Simon’s violent temperament) and an excellent scene in a local pub, in which a drunken Simon threatens a patron with a set of darts. Sangster’s screenplay attempts to create red herrings over who is insane, but this is screamingly obvious from the first time we see Reed’s laconic sneering face. Therefore all the nonsense about Eleanor’s fragile mental state, is just that…nonsense! Were it not for the wonderfully twitchy aggressiveness of Reed’s performance, the beautiful and evocative music of Elisabeth Lutyens and the crisp cinematography of Arthur Grant Paranoiac would be a dead loss. There was a genuine air of mystery, intrigue, and tension about Sangster’s earlier screenplay for Taste of Fear. The only mystery here is how this tepid and indifferent effort ever saw the light of day.
© Shaun Anderson 2011
Posted by Shaun Anderson [The Celluloid Highway] at 16:05