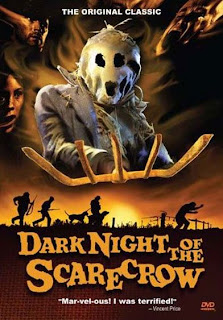 
Very few made for television movies have achieved the cult prominence of Halloween favourite Dark Night of the Scarecrow. It was originally broadcast on CBS in October 1981, became a network mainstay for many years, a success on video rental, and an unlikely success in other territories as well. I can personally attest to this by remembering several screenings on British television during the 1980’s which haunted my fractured dreams. In confirmation of the films cult credentials US distributor VCI belatedly issued a DVD in September 2010, and more impressively still issued a blu-ray in October 2011. Naturally the strictures and regimentation of US network television meant that the emphasis was very much placed on the writing. The teleplay was provided by J. D. Feigelson, and he produced a literate and well constructed plot, peppered liberally with some wonderfully acerbic moments of dialogue for the villain Otis P. Hazelrigg (Charles Durning). Nevertheless there are still several moments of surprising violence (the shooting of Bubba, the pitchfork fate of Hazelrigg), and one particularly unpleasant moment of off screen violence (the death of Harless). But it is the films almost total reliance on a carefully cultivated atmosphere of simmering small town tensions that sets it apart from contemporaneous efforts in the horror genre. 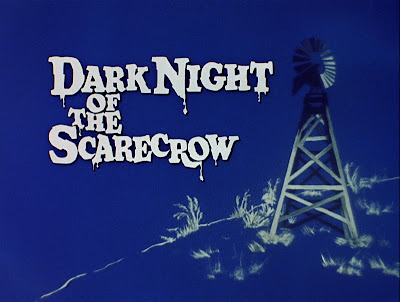 Bubba Ritter (Larry Drake) is a retarded simpleton, a mentally defective imbecile with the brain and self awareness of an infant. His closeness to the children of the town, specifically Marylee (Tonya Crowe), is something that particularly grates on postman Otis P. Hazelrigg (what a fantastic name!) who despises the affection that the loveable cretin gets from Marylee. We first see Hazelrigg voyeuristically studying their playful interactions through binoculars. The question that haunts the film though is why exactly does Hazelrigg take singular exception to this relationship? The redneck vigilante posse he assembles are browbeaten into taking part in Bubba’s demise, but their hearts aren’t in it to the extent of Hazelrigg. Is it jealousy we see in his eyes as he puts down the binoculars? His encounters with Marylee later in the film are slimy and disturbing, and hint at the rotten perversion of paedophilic desires. Hazelrigg is a man who puts on a front to the public, in polite company he is known for being tee-total, but in the dark recesses of his boarding house bedroom he knocks back the liquor with greedy abandon. He is a man with a carefully cultivated external persona, but internally he is manipulative, cruel…and perhaps something even more sinister. The teleplay bypasses making a definitive statement on this, but it makes a number of clever allusions that slowly build up a sense of disquiet. 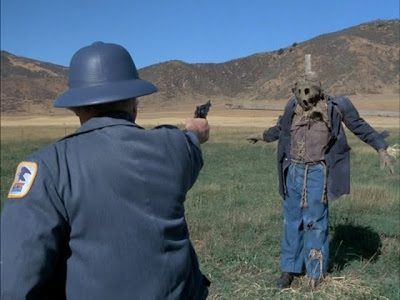 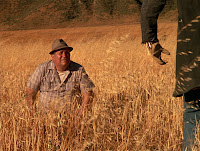 The killing of Bubba is made even more distinctive by his decision to hide in a scarecrow. All we get to see are his terrified eyes as the posse blow him into oblivion. His death made all the more ironic by the fact that his slaughterers are acting upon false information. Bubba in fact saved Marylee from the advances of a ravening dog. Despite retaining their freedom after a farcical court case (an instance where Hazelrigg’s public persona saves the day), what follows is the slow and inevitable fragmentation of the posse unit. In addition to the acidic guilt that eats away at Harless (Lane Smith), Philby (Claude Early Jones) and Skeeter (Robert F. Lyons) they must also contend with a newly materialised presence that is seeking vengeance. Initially at least this is manifested by creepy sightings of a scarecrow, and the sensation they are being stalked by somebody with intimate knowledge of their part in Bubba’s extermination. The obese Philby is the next to perish when he is suffocated in his grain silo, but Hazelrigg is still convinced that the perpetrator is Bubba’s defence attorney. His initial suspicion that it is Bubba’s mother is soon quashed when he murders her and blows her house up!! 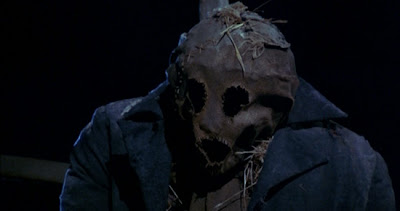 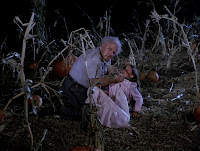 In the moments that most closely approximate the strategies of the slasher form, the film is keen to keep alive the possibility that the killings could have their origins both in the natural world and in the supernatural. We are never sure if its Bubba’s vengeful spirit until the final moments. The finale takes place in a pumpkin field, and the closure of the film maintains an aura of creeping dread and disquiet. Although we never discover the name of the town (or did I just miss it?) the film was shot in the rural country climes of California. It is a wonderfully autumnal looking film, all browns and yellows, with cornfields basking in the dwindling sun - it all adds to the atmosphere of encroaching doom. The whodunit element, red herrings, and slow but tense pace all add a veneer of quality that allies it with a more sedentary and traditional mode of generic address. Dark Night of the Scarecrow is a touching tale of small town prejudice (and possibly sexual perversion), the strength of friendship (which lasts beyond the grave), and merciless vengeance. One of the finest made for television movies, and one of the better choices you could make for an evening of Halloween horror.