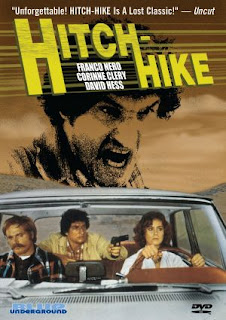 
The screen image of songwriter and actor David Hess is entirely based on a triumvirate of roles in which he played a psychopathic sadist. The recent untimely death of Mr. Hess prompted me to return to the lesser known of these three performances, the criminally insane armed robber Adam Konitz, who takes centre stage in Pasquale Festa Campanile’s offbeat exploitation flick Hitch-Hike. Due to dreadful distribution the laughing rapist Konitz has been greatly overshadowed by Last House on the Left’s (1973) Krug Stillo and The House on the Edge of the Park’s (1980) Alex. Although Hitch-Hike has its moments, it doesn’t quite reach the sadistic heights of these other two films, and this has almost certainly impacted on its relative obscurity. Fortunately this obscurity was redressed by Anchor Bay’s 2003 DVD release, and its subsequent re-issue by Blue Underground in 2008. Part of the pleasure of the film is in seeing Hess and Franco Nero blaze their own personal trails of rampant masculinity throughout the proceedings as they compete in a highly entertaining contest of one-upmanship. One is none too surprised to see Hess straying perilously close to over the top. But even Nero, whose understated sensibility of taciturn minimalism stoked the ire of the critics, gets caught up in the excitement. The excessiveness of Hess somehow brings out the best in Nero who puts in a fine and nuanced performance. 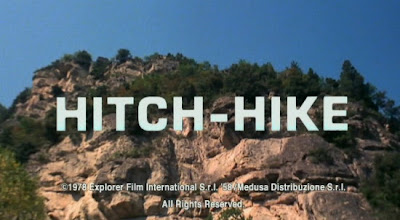 The machismo is lightened by the statuesque presence of Corrine Cléry, who would later go on to get savaged by the hounds of Hugo Drax in Moonraker (1979). Her role here is merely decorative, as the profusion of nude shots confirms the odious misogony of this venture. She plays Eve Mancini the long suffering wife of Nero’s Walter whose attitude to her is far from complimentary. To say this couple need marriage counselling is something of an understatement. Walter gleefully insults her in front of total strangers at a campsite, makes lewd sexual jokes at her expense, and then has the gall to semi-rape her in their tacky caravan. Quite how this couple believed that a road trip in the backwaters of Northern California would repair their ailing marriage is anybodies guess. Walter takes every opportunity to punish Eve for the fact that he owes his career as a journalist to her. Her father owns the publication he works for, and Walter acts out his emasculated frustrations by abusing her. Walter is an absolute sleaze of the first order, little more than a uncouth lout and Franco Nero relishes every second of inebriated vileness he shows to his tormented partner. On picking up hitch-hiker Adam Konitz, Eve seeks to provoke her husband, but it in fact gives him an opportunity to shake off the ‘kept man’ image that has so affronted his fragile masculinity and re-assert his ego-mania. 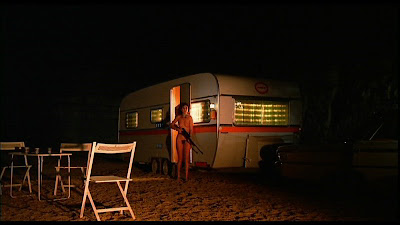 Much of the action of Hitch-Hike takes place within the claustrophobic environs of the Mancini’s car. With Konitz leering and giggling from the back seat, and Walter getting steadily drunker. Konitz has come armed with a gun and sporting a case containing $2 million of stolen loot, so it doesn’t take him long at all to suggest Eve sucks his cock! Nero’s reaction to this is superb, and one of the funniest scenes in the film. The intensity within the car begins to steadily build in stark contrast to the beautiful and sublime landscape which drifts resolutely past outside. The film was shot entirely in Italy, with the countryside of L’Aquila doubling for Northern California. By and large the illusion holds up and Campanile uses his spaces very effectively. The stripped down locations mirrors the stripped down plot, and although there are several twists in the plot, they are used sparingly and intelligently. 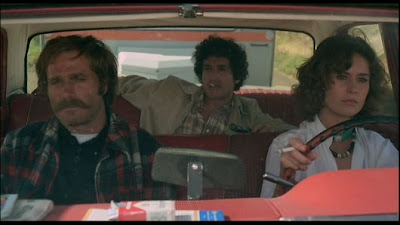 Perhaps the most controversial scene in the film is one in which Konitz finally makes good on his threat and rapes Eve. Shot in soft focus, next to a roaring fire, with Walter bound a few feet away this is more seduction than rape. What makes the scene problematic is Eve’s reaction. At one point she appears to embrace Konitz and glance in Walter’s direction. The rape is inter-cut with reaction shots focusing on the haunted and seething eyes of Walter, and this only adds to the scenes discomfiture. Although there is plenty of nastiness in Hitch-Hike the inclusion of this scene does seem at odds with the rest of the film. Its very ambiguity existing in contrast to the simplified morality of the rest of the narrative. It’s at this point that the soundtrack by Ennio Morricone comes into its own. It increases in tempo and force with every thrust, working in a way which the early camp fire song did not, and which the opening theme (though excellent in its own right) does not either. 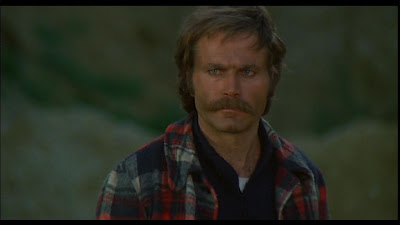 Although Hitch-Hike is amoral to the core, it ends on a particularly cynical and hard bitten note which I found a little forced. The final twist in the tale (I won’t give it away here) I felt was unnecessarily harsh and cruel. It is the one aspect of the film that shatters what has up to then been a very consistent and coherent narrative. There is much to admire in Hitch-Hike. From the picturesque cinematography of Franco Di Giacomo and Giueseppe Ruzzolini, the performances of the three leads, the Morricone soundtrack, and the efficient direction of Pasqual Festa Campanile. I don’t mind admitting that this is easily my favourite David Hess film, a screening of which I felt was a fitting tribute to this cult icon.
In memoriam to David Hess - 19/09/1942 to 07/10/2011