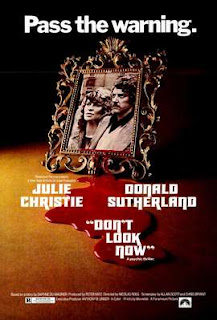 
For me one of the most lamentable aspects of theatrical distribution was the abolition of the double bill. It was common practice at one time for cinemas to offer support for the feature presentation, and try as I might, my own efforts at engineering double bills at the local multiplex often end in failure. The best I have managed was a double bill of Land of the Dead (2005) and A History of Violence (2005)…no prizes for guessing which was the ‘B’ feature! The double bill gave patrons the feeling they were having a proper night out, and also represented value for money. It was probably this latter point which heralded the death knell for this form of distribution. Far be it from cinema chains to actually give the customer a good deal. Of all the double bills I’ve come across in the history books surely the most mind bending was Don’t Look Now and The Wicker Man (1973). After the devastation of seeing Sgt. Howie burned to a crisp by Christopher Lee‘s pagan islanders, audiences would then experience the devastation of seeing Donald Sutherland murdered by a razor wielding dwarf in the passageways of Venice. Both films were distributed in the UK by British Lion, both films shared an interest in intricate plot details, both films fore grounded their settings and used their locations metaphorically, both films placed notable attention on character development, both became cult favourites, and at the time both were totally overshadowed by the self indulgent pretensions of William Friedkin’s bloated and banal The Exorcist (1973). 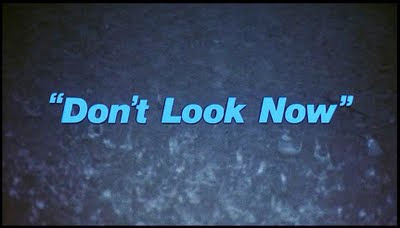 To be fair to ego maniac Friedkin’s masturbatory tribute to Italian art cinema the major problem for Don’t Look Now was the inability of the distributor to successfully market the film. In the US the film had the weight of Paramount behind it, but it seems that audiences were not quite ready for what the tagline promised was a ‘psychic thriller’. The one thing that was assured by the presence of Nicolas Roeg however was that the film would at least look impressive. Don’t Look Now overflows with one striking image after another. The compositions are painterly, with a depth and dimension most unusual for a genre production. Roeg was always able to draw on his career as a cinematographer, and no doubt he and DOP Anthony Richmond worked very closely on the films rich visual palette. This includes the symbolic recurrence of the colour red, which is given added poignancy and prominence by the dull colours it is contrasted with. When the Baxter’s daughter Christine fatally drowns in a dank and reedy pond the image achieves a greater impact by the autumnal browns and greens that surround her floating corpse. A parallel (there are so many in this film) is offered by the dull washed out masonry of Venice which is shattered by the briefest glimpse of a red coated figure. In the opening sequence the screenplay by Allan Scott and Chris Bryant sets up the theme of psychic premonitions. But it is the peculiar editing which makes it so disorientating. Time does not follow a linear path, but has a fluidity that we cannot trust, and is punctuated by flash forwards that only gradually start to make sense as we progress through the maze like narrative. 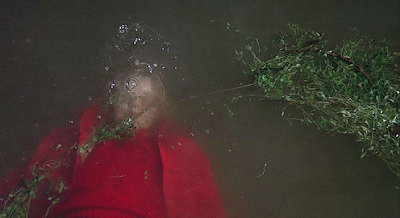 The contrast between the Baxter’s roaming country estate in Hertfordshire and the cloistered environs of Venice couldn’t be more pronounced. John Baxter is in the city to restore an old church, and this allows the filmmakers the opportunity to expose the weird and wonderful architecture of this eerie space. Whilst Roeg’s camera prowls the waterways and explores the labyrinthine streets, the claustrophobic landscape of Venice becomes a metaphor for the psychic experience and the jigsaw puzzle like nature of the plot. When Laura (Julie Christie) and John explore the streets, they often find themselves doubling back on themselves, with familiar locations suddenly become unfamiliar due to one wrong turn. Venice becomes a physical manifestation of Freud’s theory of the uncanny, and adds further pressure to the Baxter’s fragmenting relationship. Much of tension is derived from Laura’s visitations to a pair of old women, one of whom is psychic and has seen a vision of their dead daughter. John’s revulsion at these two women is entirely motivated by his fear that they will recognise his own latent psychic ability and force him to face up to it. His fear also contributes to an exaggerated rationalism that in less gifted hands could become highly irritating. But curly haired Sutherland is pure charisma here, and puts in arguably a career best performance. The hypnotic and dreamlike nature of Don’t Look Now on occasion shifts sharply into the realm of the banal. The rightfully famous sequence which cross cuts between the Baxter’s making love and getting read to go out is a moment that is both mechanical and perfunctory and highly cathartic 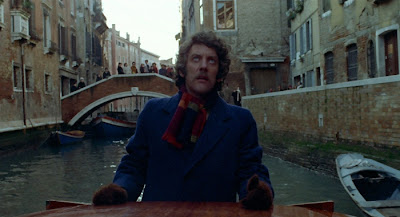 From a generic point of view the film trades on the conventions of the Italian giallo. It has more than a passing resemblance to Aldo Lado’s Who Saw Her Die? (1972), but ultimately it has a formal eloquence and sophistication that goes far beyond that popular Italian cycle. Few films possess such an ominous sense of dread, but Don’t Look Now is able to do this because a series of clues are scattered throughout. The cumulative effect of which is apprehension and fear. The murders that are occurring concomitant to the Baxter’s personal struggles are for the large part an irrelevancy. The filmmakers deserve much credit for avoiding the obvious temptation to enter lurid exploitation detail. Having surveyed the full spectrum of British horror during my extensive researches I’m convinced that Don’t Look Now exists in the very highest echelon of the genre. This was Nicolas Roeg’s masterpiece and he would spend the rest of his career trying to emulate the elusive brilliance of this startling and beautiful film.
© Shaun Anderson 2011
Posted by Shaun Anderson [The Celluloid Highway] at 17:21